No laughing in Ram Rajya 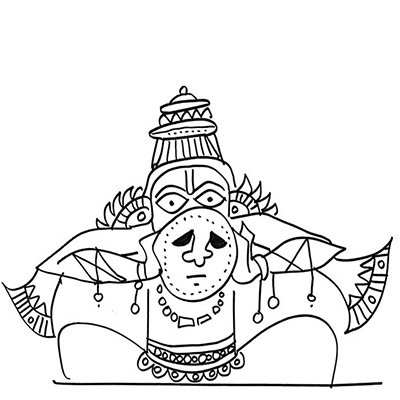 In the 15th century, a Sanskrit treatise came to be written known as the Anand Ramayana (Ramayana of bliss). The author did not reveal his name and claimed it was the work of Valmiki, the original re-teller of the Ramayana. It was composed to compensate for the inadequacies of the earlier Shok Ramayana (Ramayana of sorrow), full of separation and loneliness. In Anand Ramayana, a lot of attention is given to the glories of Ram’s rule, the Ram Rajya.

In one story, Ram hears a courtier laugh and is reminded of Ravan’s laughter, during the battle at Lanka to save the abducted Sita. Every time Ram would sever Ravan’s neck with his arrow, Ravan’s head would rise up in the air and then, full of laughter, fall towards Ram’s feet, terrifying Ram, who felt the rakshasa-king was mocking him, and so would push the head away. Ravan was, however, not laughing at Ram. He was laughing in relief, as the wise head had been separated from the unwise lustful body, thanks to Ram. Ram never got this and so, when the courtier laughed, memories of Ravan’s laughter resurfaced.

Annoyed, he banned laughter in Ayodhya. Imprisonment for those who dared laugh! The result was disastrous. People stopped performing rituals and rites of passage, or organising festivals, or watching dances and plays. They stopped playing games, or hanging out with friends, or meeting in gardens, or going to markets. People even avoided looking at each other, lest they feel like smiling or laughing. For, you never know when something you see or hear will make you want to chuckle.

As no rituals were being performed, the devas got upset and they complained to Brahma, who went to Ayodhya and possessed a banyan tree. When a woodcutter came near this tree, Brahma roared in laughter. Hearing the tree laugh, the woodcutter could not stop himself from laughing, as laughter is contagious. Hearing him laugh, his family, his friends, the whole city started to laugh, even soldiers, and ministers, members of the royal family, even Ram.

Ram got so annoyed with this that he ordered an enquiry and, on learning of the laughing tree, ordered that it be cut down. However, anyone who tried to go near the tree discovered, rather painfully, that the tree had the power to pelt stones. When news of this was reported to Ram, he decided to cut the stone-pelting, laughing tree himself. A terrified Brahma begged Valmiki to help.

So, Valmiki went to Ram and told him that the whole purpose of writing the Anand Ramayana was to make people smile and chuckle and laugh, for laughter of people indicates happiness, and happiness attracts Lakshmi, goddess of fortune. He begged Ram to ditch the ban on laughter. Why does he assume they are laughing at him, mocking him? Why can’t he, who is God, see they are laughing because he has liberated them? Why does he doubt his divinity? Convinced with the words of the man who turned his story into a great epic, Ram lifted the ban on laughter. Happiness, and fortune, followed.