How Nepal Came to Be Once Called ‘Asli Hindustan’ 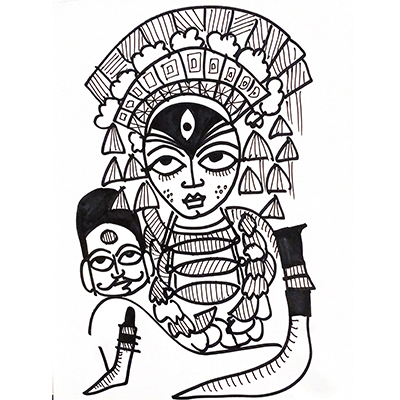 In the 18th century, as many tiny principalities and kingdoms of Nepal were being unified to one mighty kingdom, the king of Nepal saw his land as ‘Asli Hindustan’ and saw India as the land controlled by ‘ulta dharma’ of Mughals. Since then Nepal has been seen as the world’s only Hindu country. Today Nepal is a secular republic. But the flag remains a red double pennant with the symbol of the sun and moon, reminding all of the solar and lunar dynasties (Surya- and Soma- vansha) of traditional Hindu kings who once ruled the land’s many principalities.

Long ago, the tribes of the region were known as Kirata. Gradually, there were more farmers in the eastern Kathmandu valley and more herders of the western hills. The earliest kings were cowherds hence the memory of Gopala-raja in the royal lists known as vamsavali. In time, the valley came to be dominated by Newars while the mountains by Gorkhas. The people were influenced by Tibeto-Burmese traditions from the northern mountains and the Indo-Aryan traditions from the southern Gangetic plains.

In its early history, Nepal was clearly Buddhist but in its later history the land became avowedly Hindu. The two traditions are joined by the Tantrik ideology, hence great value placed on blood sacrifice to please the many village goddesses, identified variously as Buddhist (Vajrayogini, for example) or Hindu (Svasthani Mata, for example). Most popular are the living goddesses of Nepal, pre-pubescent girls of the Newari community, known as Kumari, who blesses local kings to legitimise their rule.

Nepal owes its name to Nemi, a legendary Buddhist and Hindu king, from the Mithila religion of North Bihar. This is the region linked to king Janaka as well as to Gautama Buddha. As per legend, Buddhism came to Nepal long before the Buddha himself. As per the Buddhist Swayambhu Purana, the Adi Buddha emerged from a pillar of fire in Nepal, just as Hindu chronicles claimed Shiva appeared from a pillar of fire at the twelve Jyotir-lingas. Adi Buddha was followed by seven Buddhas, the last of whom was Sakyamuni Buddha, or the historical Buddha who was born in Lumbini, in Nepal, 2500 years ago, in the time of the Vajji and Malla Mahajanapada.

As per legends, Buddha visited Nepal and showed his disciples the spot where in a previous life he had left jewels before offering his body as food to a tiger. Buddhist monastic chronicles mention that Buddhist monks were allowed to wear footwear in the cold regions after Buddha’s student Anand suffered frostbites during a visit to Nepal. Ashoka visited Lumbini, and raised a pillar there, 2300 years ago. He travelled across Nepal and as per legend his daughter married a local prince. In another legend, Bodhisattva Manjushri used his flaming sword to drain a lake that led to the formation of the Kathmandu valley.

By the 5th century CE, with the rise of Licchavi kings, Nepal was dominated by Mahayana Buddhism, and the worship of Bodhisattvas such as Avalokiteshwara was widespread. There was a monastic order for men and women, the Bhikkhu and Bhikkhuni Sangha. Temple inscriptions suggest that the land given for Buddhist shrines were also to be used for the performing of yagyas. This indicated an intermingling of Buddhists and Hindus from a very early time.

As in India, the shift from the old trading economy to the new agricultural economy marked a shift from Buddhism to Hinduism. The trading-Buddhist economy valued the celibate monks while the agricultural-Hindu economy valued the householders. In the former case, there was no family hence no inheritance of wealth. The wealth belonged to the Sangha. In the latter case, there was family, hence land rights and ritual status was inherited by children. Of course, the shift is attributed to the legendary arrival of Adi Shankaracharya who ‘overthrew’ Buddhism through intellectual debate, forced the monks and nuns to marry and settled down, instead of indulging in occult Tantrik sex rites. Adi Shankaracharya is said to have turned old Buddhist temples in Hindu ones, establishing Hindu rites, including the practice of appointing Vedic priests from Kerala in Nepalese temples. Like the visit of Buddha and Ashoka to Nepal, even the visit of Shankaracharya in the 8th century, seems more legend than fact.
Hindu History

Shankara’s Vedic influence was balanced by the Tantrik influence of the 64 Mahasiddha poets of Vajrayana Buddhism and their Carya-pada poetry. Then came the Nath-jogis of the 10th century, fierce ascetics who battled local yogini-goddesses and serpent-deities to control the weather. As per legend, Gorakhnath rose from meditation to greet his guru, Matsyendranath. This allowed serpents to escape from below his seat and end the long drought that Nepal had been suffering.

From the 13th century onwards, as Turkish warlords professing Islam swept over the Gangetic plains and conquered Bengal, more and more Hindus migrated to Nepal and sought shelter with kings there. Malla kings with links to Mithila dominated Nepal. They formalised the code of Manusmriti in Nepal. This code divided sixty-four local communities into the four varnas. Thus, institutionalising the caste system in a document known as ‘Nepal Rashtramala’. The Hindu kings legitimise their rule by worshipping local Buddhist and Hindu shrines such as Matsyendranath, Svayambhunath and Pashupatinath, as well as venerating local goddesses. Gradually local Puranas emerged such as the Pashupati Purana, Nepal Mahatmya and Himalaya Khanda. Local vrata kathas of goddesses such as Svasthani Vrata Katha began to include stories of Hindu gods and goddesses. This made Nepal Mandala part of the wider Hindu cosmology.

Because of Tibet’s relationship with Nepal and China, there was some contact between China and Nepal. The Chinese emperor saw Nepal as a tributary state, though Nepal did not see itself so. Nepal functioned as a set of independent quarrelling interrelated royal kingdoms with a common culture. Unification would happen only in the 18th century with the domination of Gorkha (Chettri) kings from the northwestern mountains, who claimed to originate from Rajputs of India. The name Gorkha is traced to Gorakhnath, the great Nath jogi, who as per legend rescued his guru Matsyendranath from the magic of Tantrik yoginis, perhaps alluding to the triumph of Shavism over Tantrik Buddhism.

The Hinduisation of Nepal was complete in the 18th Century, when the Nepali King, Prithvi Narayan Shah, declared Nepal to be the “Asal Hindustan”. In the 19th Century, his successors came up with a ‘Muluki Ain’ or a law code, as per which communities were divided and classified on the basis of caste. The high caste had sacred threads. Then there were those who could be enslaved, those who couldn’t be enslaved. Those from whose hands water could be taken; but they could not be touched. And then there were those from whom water could not be taken at all. Thus, a hierarchical society was created based on Hindu concepts of purity with different laws for different communities.

In the 20th Century, sati and slavery were banned, and positive discrimination on basis of caste reservation was introduced. The Hindu monarchy continued till the establishment of a secular republic in 2008.

What is conspicuous by its presence in Nepalese Hinduism is a fierce form of Hinduism linked to Tantrik goddesses, Shiva, as well Kanphata (ear-split) Nath jogis. What is conspicuous by its absence is the spread of bhakti ideology, based on local native music and dance traditions. One can argue that the older pre-Islamic form of Hinduism survived in Nepal, untouched by transformations that took place in India in response to Islam.