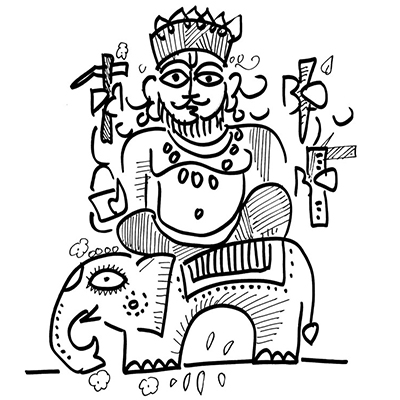 If you were a craftsman hailing from the Gangetic Plains, or from Assam, Bengal, or Odisha, it is quite likely that you would have celebrated Vishwakarma Puja, just towards the end of Pitra Paksha, and just before Mahalaya, the first day of Navratri. Pitra Paksha, when ancestors or pitris are venerated, focuses on death. Navratri focuses on rebirth. Thus Vishwakarma Puja is located at the cusp between death and rebirth. Makes sense as Vishwakarma is the divine craftsman, patron of all craftsmen.

The day specific to this puja is Kanya Sankranti, when the sun enters the House of Virgo. It is said to be the day when the plough was invented and given to humanity by Vishwakarma.

He is also called Prajapati (leader of people), Maharana (master craftsman), Brahmanaspati (lord of space), and Daksha (the capable one). He is linked to Sthapatya-shastra, Vastu-shastra, Shilpa-shastra, various treatises for settlements and buildings. Vishwakarma is perhaps the first artisan, and the founder of the Vishwakarma jati or the caste of craftsmen: carpenters, and smiths. The Greek equivalent of this was Hephaeston. In Rome, he was Vulcan. The ability to use these instruments (yantra) distinguishes humans from animals.

In the Vedas, his name is Tvastr. He is invoked when a man approaches a woman, as it is he who shapes babies in the mother’s womb, giving the foetus a proper shape. Some people link him to Brahma, the creator of all life. In early Vedic texts, he is visualised as the germ from which five sages emerged. Unlike the seven rishis who fashion ideas, these five rishis fashioned things. That made them different.

Some link Vishwakarma to Indra, who in the Rig Veda is said to be the first god who separated the sky from earth. And so, like Indra, in images, he is imagined as seated on an elephant, holding in his hands various tools and instruments like the hammer, spindle, the chisel, and the measuring stick.

In South East Asia, Brahma and Indra are seen as the same god, the creator of the heavens and ruler of the skies. And so Brahma is imagined as seated on an elephant. This could have something to do with the close maritime trading relationship of the Eastern coast of India with South East Asia 1,500 years ago.

Since this festival is common in Bengal, and since the artisans who make this image are also from Bengal, the mould used for this image is the same as the one used for the statue of Kartikeya in Durga Puja. And so, many images of Vishwakarma are mistaken for images of Kartikeya. But, unlike Kartikeya, he sits on an elephant, not a peacock. And, in his hands, he holds tools of trade, not weapons of war. In modern poster art, he looks less like Kartikeya and more like Brahma, bearded and old, and linked to a swan, or rather goose. Goose (hamsa) is an Indian bird; swan (raj-hamsa) is a European bird, made popular by Indian artists influenced by European art.

Vishwakarma has built cities: Amravati for the gods, Hiranyapura for the asuras, Alakapuri for Yakshas, Mayapura for Pandavas, Dwaravati for Krishna. He fashioned the sudarshan chakra for Vishnu by taking a portion of the sun-god’s glare and the thunderbolt, vajra, for Indra using the bones of Dadichi. He is the god of manufacturing, whose grace is needed to boost the economy.