The Pregnant King: By Devdutt 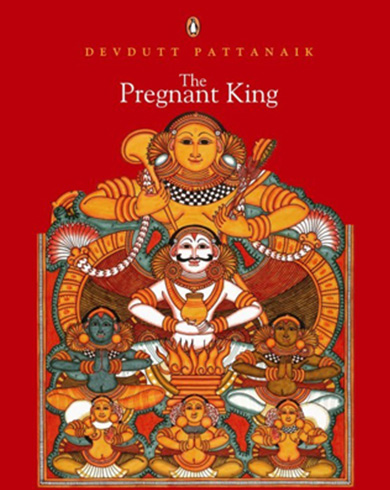 The Hindu epic, Mahabharata, written over 2000 years ago, narrates the tale of one Yuvanashva, a childless king, who accidentally drinks the magic potion meant to make his queens pregnant. The child thus conceived in and delivered from his body grows up to be Mandhata, a ruler of great repute.

What does the son call Yuvanashva? Father or mother? Can mothers be kings? Can kings be mothers? In the ancient epic, and the sacred chronicles known as the Puranas, which hurry through this slip of a tale, nobody raises these uncomfortable questions. They do so in this book.

And so a new narrative emerges: a fiction fashioned out of mythological and imaginary tales where lines are blurred between men and women, sons and daughters, husbands and wives, fathers and mothers.

There is Pruthalashva, who must be father because he is a man, and Shilavati, who cannot be king because she is a woman. There is Sthunakarna, a Yaksha, who forsakes his manhood to make Shikhandi a husband and then reclaims it to make Somavat a wife. There is Arjuna, a great warrior with many wives, who is forced to masquerade as a woman after being castrated by a nymph. There is Ileshwar Mahadev, god on full moon days and goddess of new moon nights and Adi-Natha, the teacher of teachers, worshipped as a hermit by Yaja and an enchantress by Upayaja. And finally there is Yuvanashva, the hero, king of Vallabhi, who after marrying three times to three very different women, creates a life within him, as mothers do, and then a life outside him, as fathers do, and wonders if he is either, neither or both.

If biology is destiny, if gender is a cornerstone of dharma, then how does Yuvanashva make room for such disruptions in order? For a good king, who wants to be great, must be fair to all: those here, those there and all those in between.

“ The story is very intriguing and holds you well , the last two chapters drag a bit but nonetheless a good read.
It is set in the contemporary backdrop of mahabharata with some connects with the epic characters .
The start is great , a lot of peripheral stories before to set the backdrop of the central character , the king who sells his daughter , the queen who rules , the king who gets pregnant himself after eating a magic potion meant for his three wives , the concept of braham rakshasas , the rules for men and women , the behaviour full of dharma and kama , the opposites and the parallels ,the devas and asuras , the story has all the ancient / mythological concepts that you can think of in hindu mythology. I enjoyed and finished it in just 4 odd days .. ”

“ I was a big fan of Devdutt Sir before reading this book but now i simply admire him. No one can write fiction mythology like him. The way he has told the story thoroughly and real life in last few pages is just awesome. Its a must buy for all those who loves history, mythology, ancient culture and of course Sir Devdutt. Th ”