The Axe of Parshuram 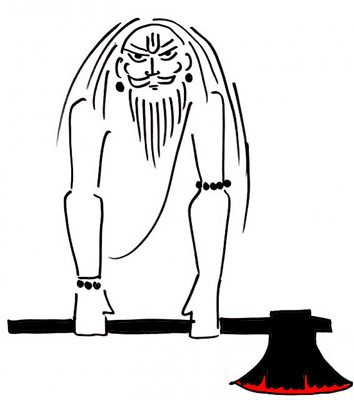 In Vedic times Rishis used to perform yagnas to harness the power of the cosmos for the benefit of the king or Raja and his kingdom. The Raja in turn ensured the livelihood of the priests by gifting them cows. The Puranas, however, refer to a period, when this symbiotic relationship soured, transforming both the kings and their priests forever.

This shift happens before the arrival of Ram and is marked by another of Vishnu’s avatar, Parashuram, which literally translates as ‘the axe-bearing Ram’. He is also called Bhargava Ram or ‘Ram of the priestly Bhrigu clan’, distinguishing him from Raghava Ram or ‘Ram of the royal Raghu clan’.

Parshuram’s grandmother, Satyavati, was a princess, daughter of Gadhi. She was given in marriage to Richika, Parashuram’s grandfather. It was common practice for Rajas to offer their daughters to Rishis, along with cows.

Parshuram’s father, the Rishi Jamadagni, had received a cow from a king of the Haihaiya clan. The king’s son Kritarjuna or Kartaviryarjuna demanded the cow back. When Jamadagni refused, the king took the cow by force, angering Parshuram, who refused to take things lying down. He raised an axe and hacked the king to death. The king’s sons retaliated by beheading Jamadagni. An infuriated Parshuram went on to slaughter five clans of warriors, some say five generations of warriors, creating five lakes of blood. These lakes were later filled and became the dreaded battlefield of Kurukshetra.

It is said that Parashuram continued killing every Kshatriya in his path until there were no more warriors left on earth. To restore the Kshatriya clans the widows had to marry priests. There is one story of a man called Nari-kavacha, meaning ‘one whose armor was made of women’. He survived by hiding in women’s quarters. All women went to this one surviving warrior and from this coward were born all future warriors. Perhaps stories such as these were propaganda crated by Rishis to insult kings who did not behave as Rajas are supposed to, as custodians rather than masters of their kingdoms.

Rishis were known to oppose kings who did not do their duty. There are tales of how Rishis ousted Pururava who went mad after his wife, the nymph Urvashi, left him. There are stories of how Rishis killed Vena who abused his power and exploited the earth. Parshuram’s massacre of kings only stopped when he met Ram, the son of Dashrath, who was so perfect a Raja that he restored Parashuram’s faith in kings and ended his slaughter.

Parshuram threw his bloodstained axe into the sea but the sea recoiled in horror and drew back revealing a new coast now known as the Konkan and the Malabar, which is why Paashuram worship is most prevalent in the western coast of India. Many Rishis and Brahmins shunned Parshuram as they felt he was contaminated with blood and murder. Determined to pass on his knowledge of warfare to priests who could balance the power of kings, Parshuram is supposed to have gone to a crematorium and resurrected dead priests, who became his students. One theory states that the Chitpavan Brahmans of Pune who dominated Indian political scene in the 18th century sprang from these resurrected priests hence the name Chitpavan meaning ‘purified from the funeral pyre’. Parshuram even passed on his martial skills today known as Kalaripayattu to families who were of mixed blood, whose mothers were from warrior clans but fathers were of priestly clans, like, some say, the Nair community in Kerala.

It is interesting to note that Parshuram’s granduncle was one of those who abused his royal power against the Rishis. His name was Kaushik and he was Satyavati’s brother. Kaushik tried to steal the cow that belonged to Rishi Vasishtha. Unlike Jamadagni, Vasishtha was able to defend himself using his spiritual powers. Humiliated in defeat, Kaushik decided to acquire spiritual powers for himself. Just as Parshuram had abandoned his priestly ways to become a warrior, Kaushik gave his warrior ways to become the Rishi Vishwamitra. Just as Parashuram became a warrior to create a better world, free of corrupt kings, Vishwamitra became a teacher and a priest to create a better world, where spiritual powers were used to bring material growth. Vishwamitra was a teacher of Ram.