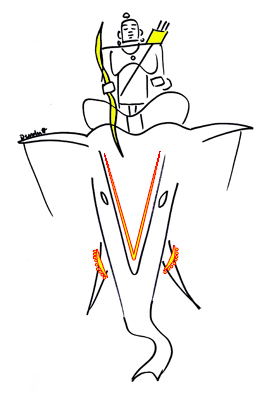 According to the rules of the war that took place in Kurukshetra, no one was allowed to strike an animal unless it posed a direct threat. Like many other rules of war, this one was also broken. Bhima killed an elephant called Ashwatthama.

The Pandavas shouted, Ashwatthama is dead. Drona, commander of the enemy forces, assumed they were referring to his son. He refused to believe them.

He decided to check with Yudhishtira, eldest of the Pandavas, a man who had never uttered a lie. Tell me, said Drona to Yudhishitra, Is my son dead? Yudhishtira hesitated. Tell me please, Drona begged.

Yes, Ashwatthama is dead. Maybe it is an elephant. Maybe a man, said the eldest Pandava. He knew it was an elephant but had been forced by Krishna to lie or at least tell a half truth. In the din of the war, Drona heard Yudhishtira say, Yes, Ashwatthama is dead. A father’s heart broke. He lowered his weapons and wept. He lost interest in the war. He lost all interest in life.

Cut his head off, Krishna instructed Dhristadhyumna, Yudhishtira’s brother-in-law, and commander of the Pandava armies. Kill him before he learns the truth. The head was cut. A Brahmin’s head. A teacher’s head. The worst crime in Vedic society. But it was done. For dharma, said Krishna.

But is it right, we ask? To lie. To kill an unarmed man. How can Krishna recommend such a dastardly act? Perhaps there is more to an action than meets the eye. To judge a decision as right or wrong is impossible unless seen in full context. It is no where more evident than in the story of Drona, the guru of the Kauravas and the Pandavas.

All over India one is taught to see Drona as an ideal teacher. But what is an ideal teacher? One who teaches his student everything he knows? One who helps a student develop to his full potential? But the teacher is also a man of the world. He has his own aspirations and needs and desires. How do these influence his teaching? Are his teaching methods a fallout of his own life’s experience?  Perhaps a reading of Drona’s life tells us a lot more about teachers and about people who become teachers.

Drona we are told was named Drona because he was conceived in a pot (drona in Sanskrit). His father was Bharadvaj who was so smitten by a nymph that he shed semen in a pot where it transformed into a child. We can interpret this as a tale of a child who was conceived in the forest by a Vedic sage and a forest woman, a tribal woman who followed her heart and was not inhibited by the Vedic rules of marriage.

Drona married Kripi, twin sister of Kripa. Both Kripi and Kripa were children of another sage Saradwat and another nymph. They were foundlings. Shantanu, king of Hastinapur, found them exposed in the forest on a clump of grass and took them home. They were raised in the palace along with Bhisma. Kripa became the in-house teacher of Bhisma’s grand nephews, the Kauravas and the Pandavas. His sister was given in marriage to Drona.

Nothing is said in the epic of the relationship between Kripi and Drona. But one wonders if the foster daughter of a king resented her husband’s poverty. Drona was so poor that his son could not distinguish milk from rice water. Ashamed, Drona went to his childhood friend, Drupada, who had inherited his father’s throne and was now king of Panchala. I will share my fortune with you, Drupada had once promised Drona. Drona, desperate for some wealth, went to Drupada and reminded him of his promise.

Drupada laughed and said, You cannot hold me to statements made when we were children.The situation is different now. We cannot be friends because friendship exists only between equals. You are a Brahmin and I am a king. I can either give you dakshina, fees for your services. Or I can give you daan, charity. Don’t expect me to treat you differently because we were once friends.

Hurt and humiliated by Drupada’s words, Drona decided to become Drupada’s equal. A very dramatic decision. Born of righteous outrage. But is it a right decision? What are the consequences of such rage? Drona’s decision must be analyzed carefully.

In Vedic society, a king’s role was to maintain the caste hierarchy – ensure kings behaved as kings and priests behaved as priests. Drupada in many ways was doing his role. He could have been nicer but he was not doing anything wrong. He ended up upsetting Drona and an enraged Drona took a step that went against the rules of caste which, according to Vedic ideology, had the potential to destroy social order. Caste is an ugly word today. We can say that in breaking the code of caste Drona was a revolutionary. But his motivation is not righteous ! He breaks it not because he believes in social equality; he breaks it to teach his erstwhile friend a lesson.

Drona went to Parashurama, a renegade Brahmin who knew the art of war. Parashurama felt kings were not behaving as kings should. His own father had been killed by a king who had once been his father’s patron. Parashurama hated warriors and kings ever since. Promise me, you will not share my teachings with the warrior caste, said Parashurama when Drona sought to be his student. Drona promised. But he broke this promise soon after by offering to become the teacher of the Pandavas and the Kauravas.

So Drona could be seen as one who broke two rules. First, he chose to abandon the peaceful ways of his caste and become a warrior. Second, despite the express wishes of his teacher he sold his knowledge to warriors. The price asked was one half of Drupada’s kingdom. Everything was motivated by anger. There was nothing noble or righteous in the actions.

When he was a child, Krishna too had promised a fellow student,Sudama,half his wealth. The poor Brahmin did visit Krishna years later. He was too embarrassed to ask Krishna for anything. Yet, Krishna showered him with gifts. This difference between Krishna and Drupada is worth noting. There is affection in Krishna’s behavior. This is missing in Drupada. Drupada is too busy playing king. He is obsessed with hierarchies. Krishna is governed only by love. What Krishna possesses and Drupada lacks is a generosity of spirit. This, says Krishna, will result in social anarchy eventually.

Drona becomes the teacher of the Kauravas and Pandavas and asks as fee one half of Drupada’s kingdom. The students attack Panchala and forcibly divide Drupada’s kingdom into two. One half is given to their teacher, Drona who appoints his son, Ashwatthama, as king. Once again the caste hierarchy is broken.

While Drona disregards the caste hierarchy for his son, he clings to it when it comes to Ekalavya a tribal boy who was not allowed to join Drona’s school on grounds that he was a tribal, not a member of the warrior caste, hence unfit to hold the bow.

A determined Ekalavya teaches himself archery. You were my inspiration, he tells Drona.

If I am your teacher by inspiration, pay my fee. Give me your thumb, says Drona. This cruel act is justified on grounds that the caste hierarchy had to be respected.

Can one respect Drona after this act? As a teacher? As a Brahmin?

Was this why Krishna felt there was nothing wrong in killing him through a lie?

By dividing Drupada’s kingdom, Drona set in motion another series of events. Drupada sent for sages who with their magical powers gave him a son who would not shy away from killing a Brahmin and a daughter who would marry into the Pandava household and divide their family property just as they had divided Panchala. Thus are born Dhristadhyumna and Draupadi.

Drona in a way is responsible for the cascade of events that leads up to the bloodbath at Kurukshetra. Had he just controlled his anger and forgiven his arrogant friend, things would have turned out differently. Drona’s obsession with his son was not healthy. It blurred all his decisions. Krishna takes advantage of this unhealthy attachment to kill him. And by doing so strikes at the root of the problem.

Mahabharata thus teaches us there is more to life than meets the eye. Yes, rules were broken in the Mahabharata war. An elephant, not a man, called Ashwatthama was killed. But why should we uphold rules when they prop up a society where actions are based on power not love, where the motivation is anger not affection?