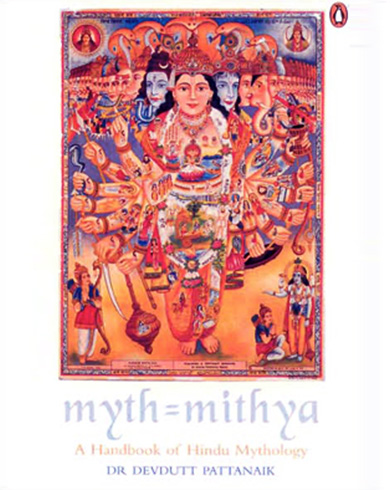 A Handbook of Hindu Mythology

Hindus have one God. They also have 330 million gods: male gods, female gods, personal gods, family gods, household gods, village gods, gods of space and time, gods for specific castes and particular professions, gods who reside in trees, in animals, in minerals, in geometrical patterns and in man-made objects. Then there are a whole host of demons. But no Devil.

In this groundbreaking book Dr Devdutt Pattanaik, one of India’s most popular mythologists, seeks an answer to these apparent paradoxes and unravels an inherited truth about life and death, nature and culture, perfection and possibility. He retells sacred Hindu stories and decodes Hindu symbols and rituals, using a unique style of commentary, illustrations and diagrams. We discover why the villainous Kauravas went to heaven and the virtuous Pandavas (all except Yudhishtira) were sent to hell; why Rama despite abandoning the innocent Sita remains the model king; why the blood-drinking Kali is another form of the milk-giving Gauri; and why Shiva wrenched off the fifth head of Brahma.

Constructed over generations, Hindu myths serve as windows to the soul, and provide an understanding of the world around us. The aim is not to outgrow myth, but to be enriched and empowered by its ancient, potent and still relevant language.

“ I have only ever read about Indian myths from the western perspective and it is wonderfully refreshing to read the Indian perspective on native myths. The language is simple and to the point without being dumbed down. Many of the stories contained in this book are ones I heard from my grandparents and my mother, but as an adult, it is wonderful to be able to understand the symbols and hidden meanings in otherwise seemingly "simple" stories. Thank you, Devdutt Pattanaik, and never stop writing. ”

“ you can read through this book fairly quickly, the stories and narratives flow very smoothly. However, you get most value from the content by re-reading sections and thinking and analyzing them along the way. This is not a read and set aside book, I view it as more of a reference manual for, well, for life really. This book- it's teaching without preaching ”