Who is a Hindu? North’s Kanwariya and South’s Kavadi 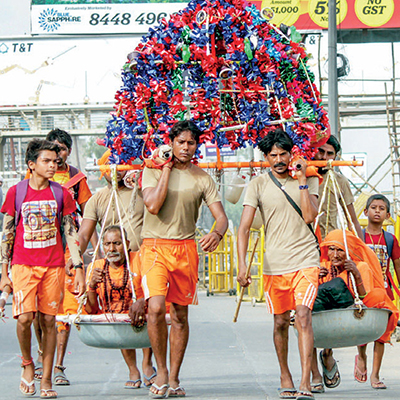 In the month of Shravan, cities and towns of the Gangetic plains are inundated with people, dressed in orange, bearing saffron flags, marching to loud music, and carrying a bamboo stick sling with pots or bottles tied to either end that are never placed on the ground. They are carrying water of the Ganga to pour in the Shiva temple in their village, a ritual that marks the end of summer and beginning of monsoon.

They are the Kanwariyas. The Kanwariyas of Bihar who make the journey to Deogarh Baidyanath temple are less boisterous compared to their Delhi-Haryana counterparts. The latter have gained notoriety in recent times as their movements are unregulated and tend to be goon-like, facilitated by political parties. Many imagine themselves as Shivaganas, or rowdy and unruly minions of Shiva. But how many people in the North of India know about the Kavadi rituals of the South, of Tamil Nadu, dedicated to Murugan, son of Shiva? This ritual also involves a bamboo stick carried as a sling over the shoulders, decorated with peacock feathers. No water pot is carried, but the principle remains the same — carrying a burden of worldly life (that’s what the Kavad sling represents), from which devotees seek freedom.

In the South, and across the Tamilspeaking diaspora around the world, as far as Singapore and Malaysia, this is penance. The devotees carrying kavadi climb mountains and caves to meet Murugan and seek his blessings and his grace to be free of worldly fetters. The ritual is more austere and happens during Thaipusam, in January, around the Tamil New Year.

So while the Northern Kanwariyas go to fetch Ganga water for Shiva during Dakshinayana (the southerly course of the rising sun), the Southern Kavadi for Murugan happens during Uttarayana (the northerly course of the rising sun). Are the two rituals related? Or is this just coincidence? A bit of history could help. Unfortunately, this history strongly relies on mythology and oral traditions, and there is very little in the form of evidence. We know that Vedic religion, along with Buddhism and Jainism, travelled from Gangetic plains to South India roughly 2,000 years ago. The earliest layers of Tamil Sangam literature reveal familiarity with all three ways of thinking. But there is an additional layer in Sangam literature that is distinctly Tamil.

This layer speaks of the boy-god on the mountain, now known as Murugan, and his fierce mother, Kotravai, associated with battlefields and crematoriums. In later times, the two are associated with Shiva as son and consort. Shiva lived in Kailasa, in the Himalayas, far from Tamil country. His wisdom came to the South via a legendary sage known as Agastya. Shiva told Agastya to migrate to the south of the Vindhyas to restore balance as all sages rushed to the north to overhear Shiva-Shakti converse on the secrets of the Vedas and Tantras. This story is part of Agama lore, popular in southern temple tradition.

When Agastya was going south, Shakti told him to engage with her son Kartikeya, who had earlier fought with his father Shiva and gone south. Kartikeya felt that his father favoured Ganesha, his elephantheaded brother, and the misunderstanding had split the family. The goddess wanted Agastya to reconcile father and son. As gifts, she gave Agastya a pot of Ganga water and two hills from the Himalayas. The two hills were tied to two ends of a bamboo (the kavad) that was slung over the shoulders of an asura called Hidimba.

Agastya and Hidimba went south carrying the pot of water and the mountains. At a particular point, they rested. They put the pot and the mountains on the ground. Ganesha, as a crow, tipped the pot of water. It became the river Kaveri, known as Dakshin Ganga. Hidimba could not lift the mountains and found a boy sitting on one of them. He realised this was Murugan, Shiva’s son. The two mountains became Dakshin Himalayas, and popular known as Shiva and Shakti hills, atop which Murugan is worshipped. There are temples to Hidimba and Agastya too. This story and pilgrimage connects North Indian Shiva to South Indian Murugan, to the northern Vedic or Nigama tradition to the southern Agamic tradition. Both created Hinduism as we know it today.

Both Shiva and Murugan are essentially hermits who eventually embrace the householder’s way, a symbolic rejection of monastic Buddhism and Jainism and acceptance of worldly Hinduism, one could say. The kavad embodies the responsibilities of household life — the obligations, the burdens, from which the householder seeks liberation (moksha). The Northern Kanwariyas carry water from Ganga and never keep water on the ground so that the untainted water can quench Shiva’s thirst, which increased after drinking poison Halahal released during amrit manthan. This is said to end the summer heat.

The Southern Kavadi bearers mimic Hidimba and carry the gifts of Shiva and Shakti, as a sling over their shoulders, to the celestial child Kartikeya-Murugan, who blesses them for the effort and acknowledges reconciliation with his celestial father. In the South, Murugan has two wives. He is not the bachelor of the North. In other words, the hermit of the North becomes householder of the South. Thus two cultures are united to create the quilt called Hinduism.