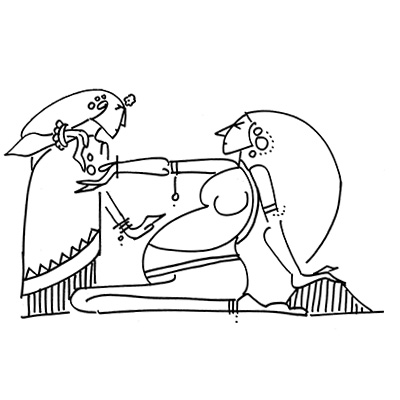 But Indic mythologies are full of stories where babies are produced in different (do we dare say weird?) ways.

There is the story in Jain mythology of a brahmin woman becoming pregnant with a child and Indra transfers the baby from her womb to a more appropriate womb, that of a queen, wife of a Kshatriya. Thus the Tirthankara is born. In the Bhagavat Purana, we hear how the foetus in Yashoda’s womb is transferred to Rohini’s womb to protect the child from the murderous Kamsa. Thus is Balaram born.

In the Ramayan, when Dashrath marries Kaikeyi because his first wife Kaushalya cannot bear him a son and astrologers tell him that Kaikeyi is bound to be the mother of a great king. When even she fails to produce a child, he marries a third time and finally concedes he needs divine help. So Rishyashringa, the sage, is called to invoke the gods and get the potion from them that will make his wives bear sons.

In the Mahabharat, when Vichitravirya dies childless, his mother, Satyavati, gets Rishi Vyasa to make Vichitravirya’s widows pregnant. Thus are born Dhritarashtra and Pandu. Kunti invokes different devas and becomes mother of Yudhishtira, Bhima and Arjuna who are called Pandavas even though Pandu does not actually participate in their birth. He has just married their mother and so gains rights of a father. By that logic, Karna is also his son but since Karna is conceived without his permission, Kunti is not sure if she should tell him of that child. So politics and inheritance play a key role in fatherhood, not just biology.

We see that in laws related to babymaking in India too. To make a baby, you can hire a womb, provided you are a proven heterosexual married couple: gay couples not allowed. Yet, the sages Yuja and Upayaja (both male and celibate) produce, from a fire pit, the twins Draupadi and Dhristadhyumna. And according to Krittibasa’s Bengali Ramayana, the two widow queens of Dilipa make love to each other to produce Bhagiratha.

You can be a single parent of your own child, but you have to prove that the child is yours through a paternity test. Adoption is allowed for single people though, as Kanva adopts baby Shakuntala abandoned on the forest floor. Or you can adopt babies but you cannot buy one for the bought child can be exploited (and the adopted one cannot?). Perhaps this law takes a cue from the story of the great Harischandra who buys a son, Sunahshepa, for a hundred cows, so that he can sacrifice this ‘son’ in place of his real son, Rohita, and thus, through a substitute, appease Varuna.