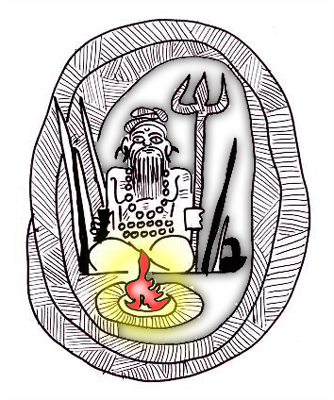 Published in First City on February 2011.

Yoga can be seen in three ways: the Modern way where it is seen as a holistic therapy for all physical and mental problems; the Upanishadic way elaborated in the Bhagavad Gita where it is a intellectual, emotional and social technique for self-realization; and finally the Siddha way where it is the means to attain supernatural powers. This third method is rarely talked about, yet traditionally for most Indians until recent times this aspect of yoga was most familiar.

A Jogi was a wandering holy man, ascetic and alchemist, mendicant and magician, all rolled into one. These magical powers were related to his celibacy and sensory continence. He was called a Siddha-Jogi, one who is accomplished. He had the power to change shape and size at will, fly in the air, walk on water, create food out of thin air, control birds and beasts, heal the sick, save people from snake bites, make the earth fertile, enable barren women to bear children, tolerate extremes of temperature, summon gods and demons at will, bring the dead back to life. He was seen riding tigers and peacocks and bulls, or sitting still on mountaintops or meditating deep in caves.

Today, Jogis who claim such powers are called Tantriks at best and charlatans at worst. This does not stop thousands of devotees from flocking to their monasteries (if they are alive) and shrines (if they are dead) seeking holy ash believed to possess magical healing powers.

Yoga and Tantra have much in common. Both believe in the primary divide between human consciousness (Purusha) and nature (Prakriti). While Yoga seeks Prakriti as inanimate, Tantra considers Prakriti to be animate with a will of its own, which is why in Tantra, nature is addressed as Shakti, or goddess, while in Yoga, nature is Maya or delusion whose spell has to be broken. While a follower of Tantra seeks power over nature, the follower of Yoga seeks liberation from nature. This makes the Tantrik a sorcerer and the Yogi a mystic. The lines are often blurred.

The man who made the secrets of Tantra and Yoga accessible to the common man is Gorakh-nath. Until his arrival, this was a secret doctrine that was revealed only to those who had been initiated into the Nath-panthi order. Not much is known about the Nath-Panthis and their doctrine. What is known comes from folk legends, as the Nath-Panthis preferred the oral to the written tradition.

As one reads medieval folk legends of India, Gorakh-nath’s name keeps popping up. Legends of Pabuji, Gopichand, Guga, Puran Bhagat, Heer-Ranjha and Raja Rasalu mention the timely intervention of Gorakh-nath, making him a sort of medieval superhero. The city of Gorakhpur traces its origins to him as do the Nepali Gorkhas. Everyone from Nanak to Kabir refer to him reverentially. References to the Nath-Jogis and Gorakh-nath comes from various sources from the 8th century to 14th century, from Afghanistan, across Punjab, Sindh, Rajasthan, Gangetic plains, Bengal delta, Maharashtra, right down to Karnataka and Tamil Nadu. The influence of Nath-Panthis in general and Gorakh-nath in particular has clearly been widespread and memorable.

What characterized the Nath Jogis was a special earring worn through a hole made in the middle of the ear (the cartilage) and not the lobe, because of which they were known as the Kanpatha Jogis, or mendicants with split ears. They had a sacred thread made of wool and a string of beads around their neck and a woolen thread tied at the waist for their loin cloth. They were celibate monks, who never stayed in one place too long, who wore red or ochre colored robes, who had strings of Rudraksha tied to their arms and legs, who smeared their hands and faces with ash, and who carried with them a yoga staff (yoga danda), a begging bowl (lota), a smoking pipe (chillum), a pair of tongs (chimta) and sometimes a trident (trishul). The yoga danda served as support while sitting and sleeping. The lota was used both for eating and ablutions. The chillum was to smoke opium and cannabis. The pincers or trident was used to keep the hearth or dhuni burning, and collect ash. When a Nath-Jogi died, he was buried in the sitting position, and his burial mound became a holy place known as his Samadhi.

Nath-panthis were also known for their very loud salutation, “Alakh Niranjan,” which basically means “One who is without attributes (lakshan) or goal (laksha) or blemish (anjan),” in other words, God without form. The Nath-Jogis were clearly hermits who held the householder’s life in disdain and refused to give divinity a form. Naturally, sectarian Hindus such as Vaishnavas, Shaivas and Shaktas who believed in temple rituals, food taboos and caste system, viewed them with suspicion.

Some scholars are of the opinion that the Nath-Jogis along with Buddhism and Jainism initially distanced themselves from mainstream Vedic thought. Eventually, however, they did become a tributary to the river now known as Hinduism. As a result there are stories where Gorakh-nath is visualized as a form of Shiva or Vishnu as well as stories that show Gorakh-nath as an independent force to which even the most powerful Hindu gods and goddesses were subservient.

Many Nath-Jogis are considered Pirs by Muslims and across India and Pakistan and Bangladesh one finds shrines that are at once mandirs and dargahs to the local people. People come here seeking blessings to solve household problems.

Gorakh-nath is counted amongst the Nav-naths, the nine masters of the Nath-Yogi tradition. The list of nine masters keeps changing, but one figure who is consistent is Matsyendra-nath, who was Gorakh-nath’s guru. The story goes that a fish once overheard the secret conversation between Shiva and Shakti. It was reborn as Matsyendra-nath.

Matsyendra-nath took diksha or initiation under Adi-nath, the primal teacher, identified as Dattatreya. Dattatreya had no human guru— he acquired wisdom by observing and analyzing nature. The list of Dattatreya’s 24 gurus include the earth, the sky, the bumble bee, the spider and even a courtesan called Pingala.

Datta or Dattatreya was the son of a Rishi called Atri and his wife Anasuya. The story goes that the three gods, Brahma, Vishnu and Shiva, took the form of young mendicants and approached Anasuya and asked her to feed them without wearing any clothes. Anasuya, who had let no man except her husband, see her naked, agreed to feed the mischievous mendicants, but such was the power of her chastity that no sooner did she undress than the three gods turned into three babies who she nursed on her breasts. The wives of the three gods — Saraswati, Lakshmi and Gauri — begged Anasuya to forgive their husbands and offered her a boon. “A son,” she said, “One who has the qualities of all three gods.” Thus was born Dattatreya. Dattatreya is visualized as a hermit who wanders the forest with four dogs ahead of him and a cow behind him — the dogs representing fear and the cow representing faith. He reassures the dogs and the cow reassures him.

Matsyendra-nath taught Gorakh-nath all that he knew. In time, the student became as powerful as the master and was told to travel independently and spread the wisdom of Yoga and use the power of Tantra to help the world. Years later, Gorakh-nath learnt that his master had gone to Kadali or Triya, the land of women, and been trapped there.

The women of Triya were cursed that no normal man would ever enter their city. Since Matsyendra-nath was no normal man, the queen of the land challenged him to enter the city. Matsyendra-nath took up the challenge and entered the city, but once inside succumbed to the charms of these women and never left, to the alarm of his devotees and students who were waiting outside the city gates for him. Gorakh-nath rushed to his master’s rescue, disguised himself as a dancing girl and entered Triya. No one suspected he was a man since no man can enter the city. Gorakh-nath then wandered the streets of the city singing songs that were taught to him by his master, songs that spoke of the power of celibacy and continence, and of the wily nature of material delusions. On hearing these songs, Matsyendra-nath was able to recollect his earlier life and to break free from the spell of the women. He left the land of the women and returned to the fold of the Nath-Jogis. From that day on,the student Gorakh-nath became known as the savior of his teacher.

In Nepal, it is said,angry with the local people, Gorakh-nath sat on the sacred serpents and prevented them from bringing rain to earth. So the local king, after many adventures, fetched Matsyendra-nath from the land of demons to Nepal. Hearing that his guru had arrived, Gorakh-nath stood up, releasing the serpents who brought rain back. To celebrate the arrival of Matsyendra-nath and the release of the rain-serpents a great chariot-festival is still held each year in Nepal.

The doctrine of Dattatreya and Nath-Jogis, known as the way of the Avadhut, or the naked mendicant, continues to be a living tradition in many parts of India, albeit a much more docile and domestic form based on devotion and service, and propagated by gurus.