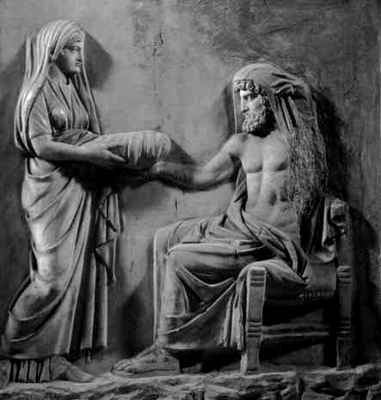 In Greek mythology, a recurrent theme is one where fathers are killed by their sons. Uranus is killed by his son, Cronos, the Titan. Cronus, in turn, is killed by his son, Zeus, the Olympian. The first to lead the gods is Uranus. When he is killed, Cronus takes his place. When Cronus is killed, Zeus takes his place. Thus, succession takes place by the death of the father. Fathers are always suspicious of their sons. Sons have to revolt against their father and claim the universe. Sometimes, the revolt and replacement takes place unknowingly. Heroes, abandoned at birth, left to die, manage to survive and return to kill their fathers. This theme is found in the story of Jason, who is left to die by his power-hungry uncle, Pelias. And most famously, in the story of Oedipus, who is rejected by his father, Laius, but who returns and fulfils the terrible prophecy of killing his father and marrying his mother. These stories led Freud to develop the famous theory of psychoanalysis known as Oedipus complex, the guilt that rises when the son claims the exclusive love of the mother and sees the father as a rival. What follows is the violent struggle between the older and the younger generation in which the younger generation always wins. But in the process, the wisdom of the past is lost. There is guilt at the death of the father as well as ignorance leading to a recurring pattern. The son ends up doing what the father did and is in turn rejected by his own son.

In Hindu mythology, however, a different recurring theme is seen. Here, it is the father who triumphs and the son loses. And the defeat of the son, often voluntary, is glorified. What scholars have observed in India is the Yayati complex, which is rather the opposite of the Oedipus complex. Yayati was cursed to become old and impotent. To stay young, he begged his sons to suffer the curse on his behalf. The eldest son, Yadu, refused. He believed that the father should respect the march of time. The youngest son agreed and suffered oldage while his father enjoyed youth, like a parasite. Years later, having had his fill of youth, Yayati took back the curse of oldage from his son. He then made a decision: the younger obedient Puru would be his heir, not the elder disobedient Yadu. What Yayati celebrates here is obedience; he completely ignores the march of time. Puru is the ancestor of the Kauravas and the Pandavas; Yadu is the ancestor of the Yadavas, hence Krishna. This theme recurs in the story of Bhisma (descendent of Puru) who gives up all conjugal rights so that his old father, Shantanu, can marry a fisherwoman called Satyavati who he has fallen in love with. The son sacrifices himself for the pleasure of the father and for this he is glorified as a hero. Yayati complex is then about the younger generation submitting to the older generation. It is about the shame that the younger generation feels when it challenges the older generation.

The difference is stark. In the Greek way, the old is defeated by the new. In the Hindu way, the new surrenders to the old. Manish recently returned from the US, after completing his MBA. He comes form an old business family that has been trading in Andhra Pradesh for generations. His father, Pradip, wanted his son to have the best of modern education. So Manish was sent abroad at an early age and he has come back not just with a degree but also with lots of work experience in investment banking firms in the US. Now he is ready to take over the family business. But there is a problem. He finds everything wrong in the way Pradip runs the business. This has led to arguments and fights at home, and sometimes at office. Pradip is taken aback by his son’s attitude. Disagreement between father and son is natural. But in his youth, he never spoke against his father’s method of doing business. He surrendered to it, watched it carefully, learnt a lot from it, and when he took over improved on it. But Manish seems to be reacting very differently. He seems to mock the old ways of doing business. Is this the result of a foreign education? Is this the loss of Indian values?

Should Manish follow the Greek way and overpower the father and establish his way in the family business? This will be good as India is getting increasingly globalized and the rules of the game are being determined by the West. Or should Manish, follow the Indian way, and bow to his father and wait until it is time to take over the family business and make adjustments later? He is confused.

But the Indian way is not so simple. In the Ramayana, Ram obeys his father and endures forest-exile for 14 years. When he returns, the father is dead and he is crowned king. What follows is the perfect rule. But in the Mahabharata, that tells the story of Yayati and Shantanu, the rejection of Yadu in favor of Puru, and the great sacrifice of Bhisma, become the root cause of the horrific war in Kurukshetra. In both cases, the sons obey their father. But while in the Ramayana the result is glorious, in the Mahabharata the result is tragedy. Where is the difference stemming from?

In the Ramayana, the son is asked to suffer exile so that the father can keep his word and so uphold the integrity of the royal family. In the Mahabharata, the sons are asked to suffer so that the father can enjoy pleasure. So the point is not obedience. The point is whether this obedience is rooted in the desire to uphold order, or the desire to gratify the self. In Ramayana, the ultimate reference point is order or dharma; in the Mahabharata, the ultimate reference point is pleasure or kama.

Manish needs to decide: Does he want to be Ram or does he want to be Yadu? As Ram, he will establish Ram Rajya and as Yadu, he will be the forefather of Krishna. His decision depends on his reading of his father. Why does Pradip demand obedience: for the good of the company or for his personal aggrandizement? If it is for dharma, then prosperity will follow. If it is for kama, then collapse is inevitable.