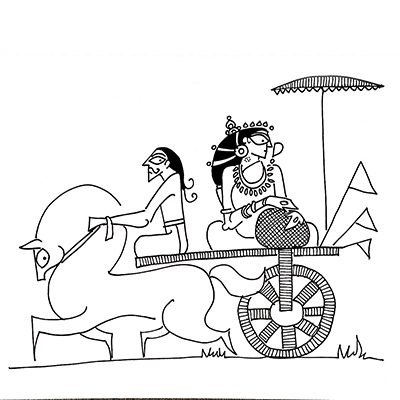 In the final chapter of the Ramayana, Ram returns to Ayodhya and is crowned king and we learn that Ram asks his courtiers about the goings-on in the city. His messengers inform him that the people of the city are gossiping about his wife’s reputation. The people do not know what happened actually when Sita spent four months in Ravana’s palace, after he abducted her. There is great speculation about her character and some people believed that a queen with a stained reputation should not be allowed to sit on the throne, next to the king.

Disturbed by this news, Ram decides to banish Sita from his kingdom. When she desires to go to the forest, Laxman takes her there but once there informs her why she is not allowed to return to Ayodhya or to tell the world she is Ram’s wife. Sita is shocked by this news and she breaks down. She stays in the forest, in the hermitage of Valmiki, where she gives birth to Ram’s children, Luv and Kush, and raises them there, never divulging her or their identity.

In his ashram, Valmiki composes the song of Ram called the Ramayana. This is transmitted to Ram via his sons, Luv and Kush, perhaps to convey to Ram what nobility is, what kingship is all about and how the banishment of Sita leaves a stain on his royal reputation. In popular tradition, Ram is called Ramachandra. Though he belongs to the Suryavansh lineage, the solar dynasty, his name contains the word, Chandra or moon, to remind one — as per one folk tale – how his nobility gets eclipsed by the moon in the way he treats Sita.

The episode of banishment in the final chapter of the Ramayana is a controversial one. For many people, it is not part of the real Ramayana: the original Ramayana ends with Ram’s return to Ayodhya and his coronation. This episode becomes a later interpolation. For other people, this plays a key role in Ram’s character for it establishes him as a king who values the good of his people over personal good.

Now, there are questions of justice being raised; because in indulging fake news, a great injustice has been done to Sita. She who has been faithful to her husband, in mind and spirit. She who goes out of her way to prove it, even by trial through fire, after she has just been rescued from the clutches of Ravana.

However, one should contextualise an often-overlooked fact: Ram never remarries! Although he is a king and is obliged to marry to perform royal rituals and produce royal heirs. This does indicate his absolute commitment for Sita. He is the only character in Hindu mythology who is called ekam-patni-vrata, one who is faithful to a single wife. By placing next to him Sita’s golden image, gold being the symbol of purity, he establishes to the world that she is chaste in mind and spirit and, as far as he is concerned, she is pure. However, since people believe her reputation to be stained and doubt her character, he abandons her. In keeping with the wishes of his people, Ram remains, in effect, bound by royal rules and regulations, for reputation plays a key role in establishing royal authority.

This is true in modern life, too. Organisations are very particular about reputations, true or false. Allegations such as #MeToo can ruin a person’s career, and it often leads to awkward situations, where it is very difficult to establish the authenticity of the crime. In some cases, the accused of the crime, must leave the organisation, irrespective of credible proof. In other cases, nobody believes the victim and she is made to leave the organisation. These are complex situations of allegations and molestation; and there are many policies being created to figure out how to handle them. The fact remains that outcomes will always be torn between true or false, especially when we look back in hindsight and find very little evidence available, or when evidence is credible but is not taken as such, because of overarching reputations, and power, and popularity, of the people involved.

Sita’s separation from Ram is a key idea in the Ramayana which speaks about how a king can be a great king and can establish the greatest of kingdoms but this often demands sacrifice of personal life. Ram privileges the opinion of his people, however false, unjust and unfair it may be, to the truth of his family. It is not about right or wrong, justice or injustice. It is about being first king, then husband.