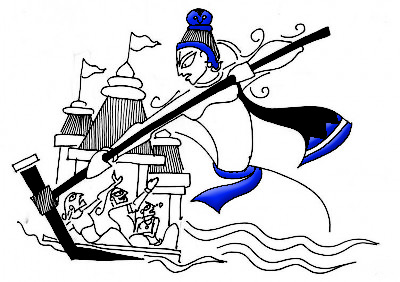 The temple at Puri, in the state of Orissa, has the unique distinction of housing three divine siblings — Krishna, his elder brother Balarama, locally known as Balabhadra, and his younger sister Subhadra. Some say that Krishna is Vishnu, Balarama is Shiva and Subhadra is Devi, thus the three siblings represent the three main schools of Hindu theism: Vaishnava, Shaiva and Shakta.

Balarama’s character is very different from Krishna’s. Balarama is silent, somber, simple but has a fiery temper that is fast to rise and quick to fall unlike Krishna who sweet talks to get his way, always smiles and never loses his cool. Physically too, the brothers are different. Balarama is fair and has smooth straight hair while Krishna is dark with thick curly hair. Balarama dresses in blue while Krishna dresses in yellow. Balarama carries the plough and the pestle, associating him with agricultural activities while Krishna carries a flute, associating him with animal husbandry.

In mythology, the hermit Shiva is Bholenath, the guileless one, who often very innocently gives boons to demons without realizing the consequences, a damage that needs to be rectified by the wily householder-god, Vishnu. In the epic, Balarama is the innocent Shiva while Krishna is the wily Vishnu.

Balarama was so happy with Duryodhana that he wanted his sister, Subhadra, to marry him. Krishna, however, had other plans. He engineered romance between Subhadra and Arjuna and got her to elope with him. “Look, he is not taking her by force,” said Krishna to pacify his infuriated elder brother, “She is holding the reins of the chariot. She wants to go with him. Who are we to stop her?”

Later in the epic, according to folk retellings, Balarama wants his daughter, named variously as Vatsala, or Shashirekha, to marry Duryodhana’s son, Laxman. Krishna stops even this from taking place. He asks Bhima’s son, Ghatotkacha, to help Vatsala elope with Arjuna’s son, Abhimanyu and destroy the wedding plans.

The story does not end here. Duryodhana and Balarama had another plan to unite the Kaurava and the Yadava clans: Duryodhana’s daughter, Lakshmani, would marry Krishna’s son, Samba. When Vatsala elopes with Abhimanyu, an exasperated Duryodhana refuses to let his daughter marry Samba. Not willing to take no for an answer, Samba goes to Hastinapur and tries to abduct Duryodhana’s daughter, but is caught by Duryodhana who throws him in a jail.

When Balarama seeks the release of Samba, Duryodhana insults the Yadava clan for never keeping their word. Incensed, Balarama turns into a giant, swings his plough, hooks it on the foundations of Hastinapur and threatens to drag it into the sea, until Duryodhana apologizes.

Years later in the great war at Kurukshetra, directed by Krishna,  Bhima strikes Duryodhana under the navel on his thigh. When Balarama learns of this, he is so angry for this breach of war-rules that he raises his plough to kill Bhima. Krishna stops him. “Yes, the letter of the law was broken,” says Krishna, “but the spirit of the law was upheld so that victims are protected, not villains.” Balarama lowers his plough, and forgives Bhima, not because he understood the complex argument of Krishna, but because the ascetic form of God had faith in his younger brother, Vishnu, the more worldly form of God.

This article is also listed under Mahabharata, Shiva