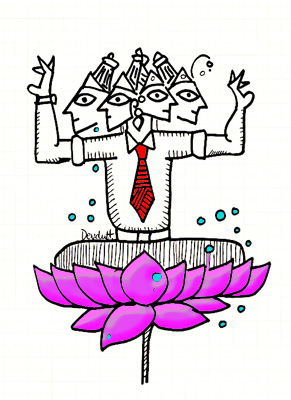 Brahma is the creator god in Hindu mythology. So it surprises most people that he is not worshipped in India. There are one or two tiny insignificant shrines of Brahma, but these are more exceptions than the rule, most likely constructed to harvest pilgrim and tourist traffic through their unique theme. The fact is that Hinduism makes no provisions for any major rituals or festivals or traditions or sects with Brahma as the focal point. So why is it so? What makes Brahma, the creator, unworthy of worship? The problem here lies more with the question than the answer.

When the word ‘creator’ is used we unconsciously associate it with the notion of creator in the Bible. And we ask why is the one who created the world not worshipped? Why instead is the one who destroys the world, Shiva, so venerated? Asking these questions indicates the failure to understand the difference between the Biblical and Hindu paradigm.

The world being referred to in Hinduism when referring to Brahma is not the objective world but the subjective world of thoughts and feelings. Brahma creates these worlds through desire and attachment. Creation began because Brahma wanted to know who he was. Self-realization was the goal for which the world was the medium. But when the world was created, Brahma was so enchanted by this creation that he got attached to it and tried to control it. In his attachment and desire to control it, he lost all sense of himself. And by doing so became unworthy of worship.

This thought is expressed through an allegorical story narrated in most Puranas. In the beginning, Brahma was all alone. He could not see whence he came from. Who was he, he wondered. Finding no answer, he decided that the best way to know who he was, he had to know who he was not. So he created the ‘other’. This ‘other’ took the form of a woman. She was Shatarupa, one of many forms. And she kept changing form. Brahma was so enchanted by her that he sprouted four heads to look upon her at all times. He chased her but she ran away. He tried to catch her but she kept giving him the slip. When she turned into an animal, he transformed himself into the corresponding male form. When she was cow, he became bull; when she became mare, he became horse. This pursuit continued. He was determined to control her, conquer her. In his obsession, he sprouted a fifth head. Watching Brahma chase Shatarupa, the creator chasing his creation, the gods shouted: the father chases his daughter (this allegory is sometimes, most unfortunately, taken literally). In disgust, they called upon Shiva who raised his sword and cut the fifth head of Brahma. Shiva then shut his eyes and became the destroyer.

Thus creation is seen as that which is produced through desire and attachment. Destruction is that which follows desire-less-ness and detachment. Brahma yearns to control creation; he is enchanted by it. Shiva has no such yearning; he is indifferent to the charms of Shatarupa. Vishnu, stands in between. Not as indifferent as Shiva to Shatarupa, who embodies the material world, but not as attached to her as Brahma. He engages with her but with detachment. Thus, Shiva and Vishnu are appropriate responses to the problem that is life. Shiva and Vishnu represents how one should live life – engagement with detachment. This is the Hindu ideal and this makes Shiva and Vishnu worthy of worship. But not Brahma.

Who is this Brahma? Who is this creature who yearns, creates subjective worlds, imagines situations, gets attached to them, seeks to control, to dominate, to possess? Sounds familiar does he not. Could he be us? You and I? Is Brahma who we are ? the creators of our world? Creators of our values and judgments and issues? Is that why there are no temples of Brahma? How can we worship ourselves? We have succumbed to the charms of the world we have created. We have become subservient to our own constructs and our own delusions. We are the creators of our own ambitions, goals and misery.
In keeping with the style of Hindu scriptures, this is never stated explicitly. This is merely alluded to. But the idea provides a powerful framework for interpersonal skills. Every time we meet a person, we must remind ourselves that he is Brahma, an unworshipped god. He inhabits his own constructed reality. How does one talk to this Brahma. He has four heads, no five, if we include that one on top of the four which face the four directions, the one that Shiva is supposed to have cut. We can only see one. The other four (facing the back, the left, the right and the one on top) cannot be seen. What can they possibly represent?

Could one represent the head – the intellectual side of man? Could another represent the heart – the emotional side of man? Could the third, the one on the back represent memories – all the experiences of man from which one churns out all understanding and values? And the head on top, could that be the ego – that side of us that makes us so insecure and makes us constantly seek validation? Yes, we see a man before us, but actually we are seeing a Brahma and when we talk to him, we must ask ourselves – who are we talking to? Is it him or his head or his heart or his memories or his ego? Who is listening to us? And that will determine the outcome of the conversation?

In his career spanning twenty years, Ralph has realized that every Brahma is unique. Some people are intellectual: when you speak to them your approach is rational and evidence-based. Others are emotional: they like it when you open your heart and connect with them sentimentally. Others are stuck on the past: everything that they hear is referred to a past event and accordingly judgment past. And then there are those people for whom everything is about their ego: talking to them is like walking on egg shells, you never know what will trigger their insecurity and sense of inadequacy. Most people are a mixture of all four heads – but what you see is just one face. The rest are hidden and it is these hidden faces that determine how we ultimately connect with people.