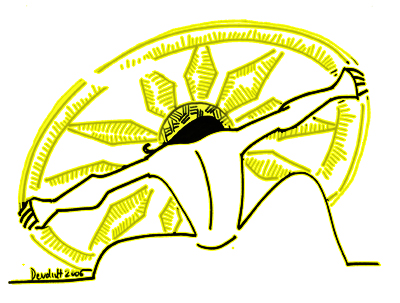 It is not difficult to fall in love with Karna. He has all the elements of a hero but is not allowed to be one — by his mother, his brothers, his teacher, even God. Our heart goes out to him.

It all starts with a princess called Kunti letting her curiosity get the better of her. She uses a magical formula given to her by a sage to summon the sun-god, Surya, who is compelled to give her a child. Fearful that a child conceived before marriage may ruin her reputation, Kunti places the child — born with a natural armor and divine earrings – in a wicker basket and leaves him afloat to a river’s whim, very much like Moses in the Bible. But while the river takes Moses, the son of a slave, into a royal household, this river takes Karna, the son of a princess, into the house of a charioteer transforming a Kshatriya, member of the ruling class, into a Shudra, a member of the service class.

Rejected by his natural mother, this foundling refuses to submit to this enforced destiny. In his heart he is a warrior. He knows it. Why else would he be born with an armor if he was not fated to fight? He approaches Drona, teacher of the Kuru princes, but is turned away. “Stick to your caste duties,” he is told. But what determines a man’s caste? The caste of the father, say the scriptures. Who is Karna’s father? Is it the man who raises him (a charioteer), the man who made his mother pregnant (a god) or the man who married his mother (a king)?

In the Mahabharata, fatherhood is intensely debated. The storyteller wonders who is the true father of the Pandavas — Pandu, who married Kunti, or the gods, who impregnate her because her husband can’t, or is it Bhisma, the granduncle of the boys, or Vidur, their uncle, who serve as foster fathers ? The conclusion is that it should be Pandu who is lawfully wedded to Kunti hence father of all her children. Does this include children she bore before she married him? Does it make Karna the eldest Pandava and hence true heir to the Pandava fortune?

Krishna believes it so for years later when he tries to lure Karna away from the Kauravas he offers the following bribe, “You will be king. Your five brothers will stand by you. Their wife, Draupadi, will be your queen.” Rejected by Drona on grounds that he is not a Kshatriya, Karna seeks tutorship of Parashurama, a warrior sage who is willing to teach the martial arts to anyone but a Kshatriya. But when Parashurama notices his ability to withstand intense pain silently, Parashurama concludes the boy is a Kshatriya by birth. Feeling he has been made a fool of, an enraged Parashurama curses Karna. “You will forget all that I have taught you at the moment you need it most.”

Rejected by Parashurama, Karna returns to his mother’s house. According to a folklore in Andhra Pradesh, on his way he comes across a young girl crying because she has dropped her pot of milk on the ground and she fears punishment at the hands of her step-mother. Out of compassion, Karna takes the wet earth and squeezes milk out of the soil back into the pot. The girl goes away happy but the earth-goddess is not pleased. She swears that one day she will squeeze Karna the way he squeezed her and that would be the cause of his death.

Rejected by the earth herself, Karna is determined to win a respectable place for himself in society based on merit. He decides to participate in an archery tournament held in the city of Hastinapur. The tournament is organized by Bhisma to showcase the skills of his grandnephews, the hundred Kauravas and the five Pandavas. Unfortunately for him, the show is stolen by a handsome young man who calls himself Karna. Everybody wonders who this man is.

Kunti recognizes his armor and earrings and identifies him as her son but dares not tell anyone of her pre-marital misdemeanor. To Karna’s great discomfort, his foster father rushes into the arena and hugs him in public. The cheering onlookers fall silent. The great warrior is no warrior at all. He is a lowly charioteer. This association haunts Karna all his life.

Rejected by the Pandavas, Karna finds honor amongst the Kauravas. Duryodhana, eldest of the Kauravas, anoints Karna king of Anga, thus making Karna a Kshatriya by merit if not by birth. For this Karna is eternally grateful. Duryodhana and Karna become the best of friends but we are never sure if the relationship is true or one based on mutually convenience. No one takes Karna’s royal title seriously. For everyone, he remains suta-putra, the charioteer’s son, the outsider. This is most evident in the archery contest organized by the king of Panchala for the hand of his daughter, Draupadi.

When Karna goes to pick up the bow he is disqualified by the bride herself on grounds that a man of unknown origin and low rank cannot even contend to be her groom. Perhaps because of this public rejection, despite all his nobility, Karna does not come to Draupadi’s rescue when she is publicly disrobed by the Kauravas. He quotes an ancient law, “A woman with more than four husbands is nothing but a public woman, a whore!” Technically he is right. But morally? It is this refusal to help the helpless in a moment of dire need that makes Karna, like other members of the Kuru nobility, such as Bhisma, a marked man in the eyes of Krishna.

One curious Maharashtrian folklore states that later Draupadi secretly fell in love with Karna and this secret of hers was known only to Krishna. Karna and Duryodhana are inseparable like Krishna and Arjuna. Karna sides with Duryodhana even when Duryodhana does wrong. “The hand of friendship once given cannot be taken back,” he tells Krishna. Krishna retorts, “Your integrity is wasted on a man without integrity. You may never go back on your word but he has — promised to return the Pandava lands after 13 years but refused to give back even a needlepoint of territory.” Duryodhana’s mother, Gandhari, resents his association with a lowly charioteer. Even Bhisma does not like Karna. Nor does Drona. For them he is the bad influence. They blame Karna for corrupting Duryodhana. In a way that is true. Without Karna, the Kauravas are nothing.

Assured of Karna’s unwavering loyalty, Duryodhana is unafraid to be arrogant and forceful, claim all rights to the inheritance, even though the elders believe at least half of it, if not all, belongs to the Pandavas. When war is declared, Krishna tries to make Karna defect but fails. He finally motivates Kunti to tell the truth for the sake of the Pandavas. Kunti goes to Karna and tells him all. He recoils. He realizes she is doing this for the Pandavas and not out of any love for him. “That’s not true. I love you. I am only afraid of the truth,” cries Kunti. Karna refuses to believe her.

According to a Tamil folklore, Kunti plans to offer Karna milk of her breast she has reserved for him from the day of his birth. This milk has magical power and can render Karna invincible. Krishna is about to make the milk disappear, when Karna tells Kunti that he will not take milk denied to him at birth. He promises Kunti he will not kill any Pandava except Arjuna. With or without him she will always have five sons. Karna tries to earn merit and fame by becoming the lord of charity, a ‘daan-veer’. Krishna takes advantage of this charitable nature and gets Indra, king of the gods, to ask as charity Karna’s natural armor. Karna donates this leaving himself vulnerable. Impressed by Karna’s unwavering commitment to charity, Indra gifts Karna a spear that never misses its mark but can be used only once.

Karna reserves it for Arjuna, his great enemy, but Krishna forces him to use it against Ghatotkacha, the demon son of Bhima. It is almost as if Krishna is conspiring against Karna. At the height of the war, when Arjuna and Karna finally come face-to-face, a moment both have been preparing for years, the earth-goddess is instructed by Krishna to grab hold of Karna’s chariot wheel. She does so. Karna tries to use the magical formula to release the chariot wheel but Parashurama’s curse manifests itself right at that moment. He forgets the formula. In a fit of frustration, he throws down his bow and jumps off his chariot and tries to free the wheel himself. Krishna tells Arjuna to take advantage of the situation and shoot Karna. “But he carries no weapons and his back is turned towards me,” protests Arjuna. Krishna goads him nevertheless. He is as helpless as Draupadi was when the Kauravas disrobed her in public, says Krishna. Show no mercy to the merciless, advises Krishna.

Arjuna releases the arrow and Karna dies — shot in the back at a moment when he cannot even defend himself. Why did Krishna kill Karna in such a horrible way? Scholars say this is God’s way of achieving karmic balance. In his previous life, Krishna was Rama. And Rama had sided with Surgiva, monkey son of Surya, the sun-god, and shot Bali, monkey son of Indra, the rain-god, in the back. As Krishna, it was necessary to reverse the situation. God sided with Arjuna, who was the son of Indra, while shooting Karna, the son of Surya, in the back. He who is blessed with divine favors in one lifetime loses it in the next; thus are the books of karma balanced and closure achieved.