The sage who witnessed all 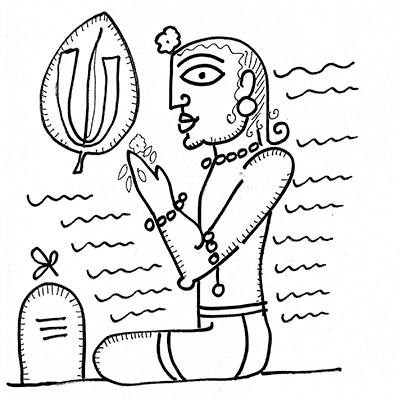 In Hinduism, the Markandeya Purana is one of the oldest puranas, roughly 1,700 years old. It is special because it contains the earliest reference to the Devi Bhagavata story in which Durga defeats the buffalo-demon Mahishasura. This reference though is only 1,300 years old, so it must be a later addition.

Markandeya is a rishi of great repute because the characteristic most associated with him is his immortality. It is said that being immortal, he witnessed events in all the four yugas, as well as the Pralaya; therefore, he narrates the story that becomes the purana.

In the 16th year of his life, Markandeya’s parents burst into tears and revealed to him that the hour of his death had arrived. Being smart, the boy was not afraid of death because he knew death is inevitable. Preparing himself for death, he prayed to Shiva by creating a linga made up of sand on a riverbank.

As Markandeya worshipped the Shivalinga, Yama appeared to take him to the land of the dead. He requested Yama to wait for a few moments until he completed his prayers. Yama scoffed to say that death waits for no man. He hurled his noose, determined to drag Markandeya’s life out of his body. Markandeya appealed to Shiva for help, who appeared. Shiva kicked Yama away and rescued his devotee. Markandeya became immortal and Shiva came to be known as Yamantaka: the one who defeated death.

In other stories, because of his immortality, Markandeya is a witness to events in Pralaya. He sees the mountains, valleys, cities and forests consumed by the waves of the sea. And then he finds, floating on the waves of this torrential, terrifying storm, a banyan leaf, on which lies a baby, gurgling in happiness and sucking his big toe. He realises this is Vishnu and bows before him.

The baby inhales deeply and Markandeya is drawn into the child’s body. Within, he sees the whole world regenerated, from Bhu-loka to Naga-loka to Patal-loka, where serpents and the asuras reside, to Swarga, where gods dwell. The child then exhales and Markandeya returns to find the world once again plunged in Pralaya and realises that the divine is both creator and destroyer. What is being destroyed outside is being created inside. He understands the idea of god as the creator, sustainer and destroyer. He bows to the child and composes songs in his glory.

Thus, Markandeya is associated with both Shiva and Vishnu. Shiva, the destroyer, grants him life, and Vishnu, the preserver, grants him the vision of the universe that goes through cycles of birth and death. Markandeya is found in the Ramayana and the Mahabharata, famous for telling stories to kings who visit him. Being immortal, he knows more stories than anyone else. He has witnessed gods, kings and sages in every period of human history. He becomes the one who knows events before and after history.

This article is also listed under Puranas, Shiva