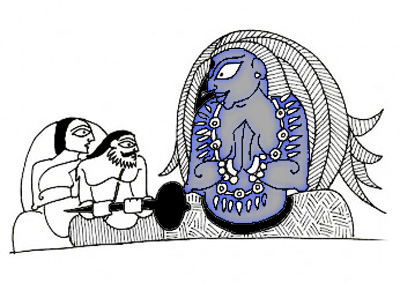 Everyone knows that the five Pandava brothers in the epic Mahabharata shared a wife called Draupadi. What most people do not know is that each of the brothers had other wives too.

In fact, the first brother to get married was not Arjuna or the eldest, Yudhishtira, but the mighty Bhima. After the Kauravas attempted to kill the Pandavas by setting alight their palace (made of lac) on fire, the Pandavas hid in the forest, disguised as the sons of a Brahmin widow. During this time, Bhima killed many Rakshasas such as Baka and Hidimba. Hidimba’s sister, impressed by his strength, chose him as husband and they had a son called Ghatotkacha.

Even before this, according to folktales in Rajasthan, and Orissa, Bhima had married a Naga woman. When the Kauravas tried to poison him and drown him in a river, he was saved by Ahuka, a Naga, and taken to the realm of the serpents, where he was given a wife. From that union was born a child called Bilalsen, who played a role in the war later on. In variants of this legend, Bilalsen, also known as Barbareek, was the son of Ghatotkacha, and hence was grandson of Bhima, not son.

The brothers agreed that Draupadi would stay with one brother for a year before moving to the next one, a shrewd move to prevent jealousy and to identity paternity of Draupadi’s children. In the four years between, each brother spent time with another wife.

When Draupadi agreed to be the common wife, her condition was that she would share her household with no other woman. In other words, disregarding popular practice of the times, the Pandavas could not bring their other wives to Indra-prastha. Arjuna, however, succeeded in bringing one wife in. She was Krishna’s sister, Subhadra. And with a little advise from Krishna, she was able to trick her way into the household.

Though Draupadi’s favourite, Arjuna had the most number of wives amongst all brothers. The story goes that Arjuna once entered Draupadi’s chamber while she was with Yudhishtira. To atone for this trespassing, he went on a ‘pilgrimage’. During this time he married many women.

In the classical Sanskrit retelling, Arjuna married the Naga Ulupi, the princess Chitrangada of Manipur and finally Krishna’s sister Subhadra during this pilgrimage. But in Tamil retellings of the Mahabharata, he married totally seven women. One of them was a warrior woman called Ali who refused to marry him but Arjuna was so besotted that he sought Krishna’s help. Krishna turned him into a snake and he slipped into Ali’s bed at night and frightened her to become his wife. Some say he forced her to be his wife as he managed to spend the night in bed with her in the form of a snake. This clandestinely erotic folktale alludes to Pisacha-vivah, or the marriage by way of ghosts, that is condemned in the Puranas.

Thus the world of the Mahabharata very comfortably refers to polyandry (many husbands for one woman) as well as polygyny (many wives for one man). What is interesting to note is that most storytellers are embarrassed only by the former than the latter; hence there are tales to ‘explain’ Draupadi’s many husbands but none to explain each Pandava’s other wives.