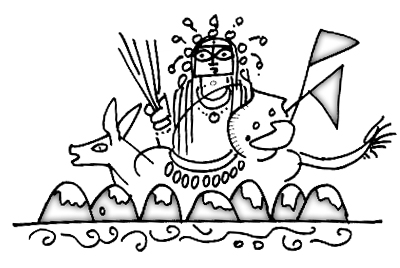 In Bengal, when people fell ill, women of the family prayed to the twins, Jvara-Jvari, a brother and sister who caused fevers. Not much is known about these fever-causing deities or the ritual.

But according to one story in the Puranas, when Daksha conducted a yagna, he invited all the gods except Shiva. This angered many sages who complained to Shiva. But Shiva was indifferent to Daksha’s ritual and so did not attach any significance to being kept out. When the sages insisted, a drop of sweat fell from his forehead. From this sweat was born Jvara (maybe along with Jvari, but that is not stated). Jvara went to the sacrificial hall and spread disease. Bodies became warm, muscles ached, skin started to itch, rashes appeared in unmentionable spots, pockmarks popped up — all in people who sat around the sacred fire. The priests had to stop chanting as they began coughing and sneezing incessantly. Voices turned hoarse, unsuitable for the hymns. “This is the price you pay for keeping Shiva out,” said the sages. So Daksha prayed to Shiva, begged for forgiveness, and Shiva, who is easy to annoy and easy to please, cured all with his grace becoming known as Vaidyanath, the lord of healers.

Across India, there are shrines associated with seven mothers or seven virgins, known as Sapta-matrika, usually simply seven vermilion smeared rocks next to ponds and river banks, near tamarind and neem trees. In Maharashtra they are known as Sati Asara, which is perhaps a corruption of “Sapta Apsara”. They are said to cause pregnant women to miscarry and young babies to develop rash. No one is sure who these goddesses are. Their origin is shrouded in mystery yet they are found in villages across the Indian subcontinent. Some stories link them to the wives of the Seven Sages who make up the Great Bear constellations. One day, they went before the sacred fire, or took a dip in a pond, without wearing any symbols indicating they were married. As a result the heat of the fire, or the wetness of the water, made them pregnant. They were accused of infidelity and thrown out of the house and now they wander the earth, angry and determined to destroy the lives of women who do not acknowledge them as chaste goddesses. They tried to kill Skanda, son of Shiva, but he addressed them as mothers, even suckled on their breasts, and gave them the right to bring the curse of fever upon anyone who did not acknowledge them. They have also been identified with the Krittika or Pleiades constellation.

More popularly, the seven mothers who cause fever are worshipped as one goddess, known variously as Jari-Mari Mata, Jari meaning Jvari or fever, and Mari referring to Maru or dry barren desert heat. Very particularly when she causes pox, she is called Sitala, the cool one, cooled by curds and gifts of bridal attire and cooling ingredients such as neem, chillies, tamarind and lemon. In Sitala Mahatmya, she is described as riding a donkey and carrying a broom and a winnow basket containing pulses (which look like pox pustules) and a pot of healing water. Her companions are Jvara as well as Ghentukarna, who bring itches and skin diseases, and Raktavati who causes blood oozing fevers. In the south, the role of the goddess who brings fever if ignored and takes away fever when acknowledged is taken up by the much feared and revered Mariamman. These temples are popular even today across India.

Not many people today see disease as the wrath of a god or goddess, who demands appeasement, or as the work of a demon who has to be destroyed. But still these stories persist. It reveals our faith in how disease has traditionally been seen: not the presence of something unnatural, but as the imbalance of nature’s forces. In every story mentioned in this article, disease has its roots in pain and suffering: Daksha’s rejection of Shiva, sages doubting and rejecting their wives, women ill-treated for being unmarried or barren. Disease of the flesh was then seen as an outcome of social disease, our inability to be kinder, more welcoming and more compassionate of the world around us. These deities frightened us because we refused to acknowledge some fundamental truths about life and living.