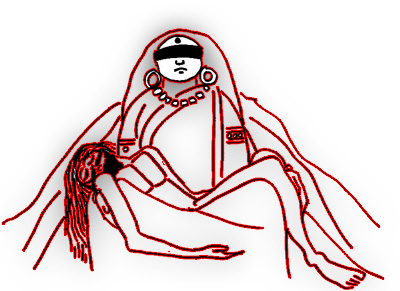 Then she wept, this old, frail, mother of a hundred sons. The great battle had been fought. Dharma had been established. Around her were the corpses of her hundred sons: some with broken necks, some with smashed skulls, some with open chests, and one with a broken thigh. The wailing of her widowed daughters-in-law filled her ears. They mourned for her sons and her grandsons, all of whom were killed by the Pandava army. Tears rushed out of her eyes, making her blindfold so wet that she feared that she would be able to see those dead faces through the cloth. Unable to bear the thought, she squeezed shut her eyes. The hundred pots from which these hundred were born occupied her courtyard in the palace. But these were bodies of grown men, princes, warriors, each one with a broad chest and long arms. They occupied an entire field. Their bodies still gleamed with their sweat, their armors, their jewels, their weapons. How magnificent they would have looked as they marched out of the city blowing a hundred conch-shells?

But they were villains. They had to be killed for dharma to be established. Rather than wishing them victory had she not wished victory to dharma? Did she not doubt their righteousness? Did she not feel they were not quite the children of destiny? That privilege rested with her five nephews, the sons of Pandu. Yes, they had gambled away their wife and kingdom, but they had been punished for it – thirteen years of humiliating exile. They were sinless when they marched into Kurukshetra. But not her sons – they had not washed away the sin of publicly disrobing a helpless woman. They had argued that the thirteen years of exile was not yet over and so they were well within their rights not to return the Pandava lands, but when Krishna had brilliantly argued otherwise, they had simply said, like petulant children refusing to share their toy, “Not a needlepoint of territory shall we part with.” That is when she knew that victory may not be theirs. Dharma was not with them.

Do mothers of villains have the right to weep? Everyone mourns for Arjun’s son Abhimanyu who was killed by his uncles, for Bhima’s son, Ghatotkacha, who served as a human shield for the Pandavas, for the five sons of Draupadi who were so mercilessly slaughtered at night in that dastardly attack by Ashwatthama. They were heroes. They were sons of heroes. Her sons – must the mourning for them be more muted. They lost. They were without doubt villains. But they were her sons.

When children die violently, in the generations to come, every mother mourning for her son will say, “My son is like the son of the Pandavas, innocent and righteous. Why did they die? No one will say, my son was like the son of Gandhari for Gandhari’s sons deserved to die. ” We want our children to be heroes, martyrs, not villains or terrorists. Hero or villain, martyr or terrorist, they are children. And a mother will weep for all of them.

Says Gandhari, why did my children refuse to share their kingdom with their cousins? Why did Karna who accompanied my firstborn, Duryodhana, everywhere not teach them the value of charity? We had so much, surely they could have accommodated five more. Their refusal had no reason except greed. Sheer meanness. Animals are neither greedy nor mean, only humans are. Animals are neither charitable nor kind, only humans are. My children chose to be humans – the wrong type of humans. But they were my children nevertheless and I weep for them.

Says Gandhari, maybe my children became greedy because of me. Their father could never see them; I, their mother, refused to see them. Basking in the glory of being a noble wife, I blindfolded myself from their childhood. I never saw their birthmarks. I never saw their beauty. All I felt was their breath and their sweat. Hundred tiny hands clung to my robes when I walked down the palace corridors. Now a hundred lifeless hands yearn to touch me.

Vyasa, storyteller, do you realize that the Pandavas are not of your blood? The Kauravas have the blood of Dhritarashtra, your first son by Ambika. Your second son, Pandu, born of Ambalika, did not father any sons. And laws will not allow your third son, born of a servant woman, to wear the crown. The villains of the epic are your grandchildren. Do you feel noble, an objective keeper of dharma, as you condemn them and described the gory details of their murder? Or are you so great an ascetic that you refuse to acknowledge your fatherhood? Do you prefer addressing the Kauravas are villains rather than grandchildren? Detached, you do not feel my pain. You feel nobody’s pain.

Every day, henceforth, for thirty six years, Bhima will remind me and my husband how he killed our hundred sons. When we sit down to eat, just as when we are about to put the food in our mouth, he will crack his knuckles so that we hear the sound that came when he broke their bones or ripped open their chest. Draupadi will try to stop him, but he will justify his actions, “They must never forget their children’s villainy. They were quiet when you screamed for help in the gambling hall. Their silence led to the death of your sons and my Ghatotkacha. Why forgive them? Let me have the pleasure of reminding them how I killed each and everyone of their hundred sons. How they begged me to stop and how I drank their blood.”

If I had eyes, says Gandhari, I would look at Draupadi and demand to know is this the end she wanted when she screamed curses at my sons? Yes, they disrobed you and you have washed your hair in their blood. It was right they were killed. Now, look at me, I am your victim – the victim of your justified outrage: a weeping mother, old, alone, a blindfolded woman with a blind husband, destitute, criminal parents who never looked at their children, a wretched couple who were blind to the faults of their children. We are paying the price of poor parenting. We deserve this, yes. Does it make you happy to see us so?

There is a little story that Vyasa has not included in the great epic perhaps because it is too cruel in its honesty to put down in writing. Bards say, that Gandhari refused to leave the battleground strewn with corpses of her children even when the sun set. “Go home,” she told her husband and her servants and her daughters-in-law, “Let me be here alone with my children. Their presence comforts me.” So they left her alone. Old and frail, she waved her stick to keep the wolves and vultures from getting to the rotting flesh of her sons. Krishna came and tried to persuade her. “They are gone,” he said, “Why do you cling to their bodies.” And she replied, “You will never know a mother’s pain.” And he said, “A pain remains until another pain comes along.” And she retorted, “This pain is permanent. It is a mother’s pain. It will not pass.” Krishna left. The moon rose. Hungry wolves waited for the mother to tire. She waved her stick with determination – none would get to her sons. They were under her protection. Suddenly, Gandhari felt a pang of hunger. A hunger she had never felt before. A great hunger that it caused her to bend and bind her stomach. It was as if she had not eaten for a thousand days. She could not think or feel anything. All she wanted suddenly was food. And when the thought of food entered her mind, the smell of a mango entered her nostril. It was the sweetest of smells and it came from above her. She tried to get to it but it was out of reach. So she found a stone and climbed on it to get to it. Still the mango was out of reach. She put another stone above the first one, but the mango was still out of reach. Then other stone and another, a whole pile, before she finally got hold of the mango. She plucked it and sucked on it: it was the most sweetest richest succulent fruit she had ever eaten. She ate it quickly, even the skin, licked her fingers and felt the hunger pass away. With the hunger gone, the pain returned – the horror of her children’s death. What was she doing eating a mango when they were dead? She felt the stones on which she was sitting – they felt softer and wet, almost like flesh! She recoiled. These were not stones on which she sat; these were the bodies of her children. She sat on them and ate mangoes. How could she? Then she remembered Krishna’s words, “A pain remains until another pain comes along.” This was his way of teaching that her pain, though very deep and very valid, was like all pains impermanent. This was a cruel lesson of a ruthless god. Gandhari howled at the truth of her insight. Then she screamed a curse, “May you Krishna witness the death of your children and your children’s children. And may you die alone in the forest, hunted down like a beast.”

Krishna came and hugged her. She wept. And she felt Draupadi weeping next to her. Both were being hugged by Krishna, the mother of villains and the mother of heroes, both being comforted by he who they say is God. He said nothing. He allowed Gandhari to vent out her venom and he accepted the curse quietly – no retaliatory curse. Yes, his children would die as Gandhari had deemed fit and so would he. Let his clan suffer so that the spiral of vendetta does not continue. It has to end sometime. And if this demands the sacrifice of his clan, then let it be so.

Look Draupadi, your hair has been dyed with the blood of Gandhari’s children. But in getting that blood, so much rage was generated that it cost you the lives of your five sons. Was it worth it? Could you have forgiven? Or was vengeance the only recourse? Is vengeance ever the answer? He who strikes another always believes he is right in doing so – they are heroes, they are martyrs. But ask the one struck down – they will call the hero a villain, they will call the martyr, a terrorist. Gandhari weeps for her children – her heroes, your villains. You weep for your children – your heroes, her villains. When will this stop? Will humans discover the power to share and forgive, strike the root cause of violence?

Gandhari remembers Sanjay narrating the song that Krishna sang before the war – the Bhagavad Gita. It was not an elaborate excuse to go to war. It was an understanding of wherefrom comes war. Dharma, she realized, is not that which heroes and martyrs believe is right. It was clearly something else.

Vyasa raises both his hands and shouts, “Follow dharma and there will be peace in the world. True peace, not peace born by dominating the other.” Is anyone listening?