One life across many epics 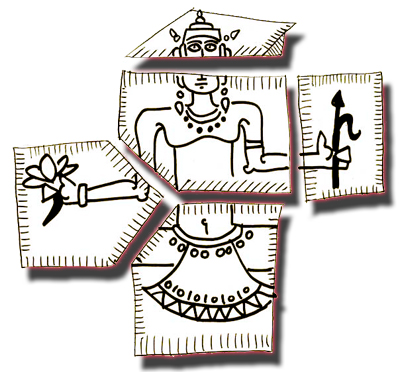 In the Ramayana is the story of a bear called Jambavan who served Ram with devotion, helping him along with the army of monkeys, to attack Lanka and defeat the demon-king Ravana. It is said that he is a form of Brahma who wanted to walk the earth along with Vishnu when the latter took the form of Ram. But during that time, he had a thought, “How I wish to fight with Ram! But I cannot as I am his great devotee and admirer.” Ram divined Jambavan’s thoughts and said, “In my next life, when I descend as Krishna, you will get the opportunity to fight me.” And so it came to pass that when Krishna was searching for the missing Syamantaka gem, he found it with a bear cub who turned out to be Jambavan’s son. When Krishna tried to claim it, Jambavan challenged him to a fight. And so they wrestled and as they wrestled, Jambavan realized he was fighting the man who was once Ram. God had fulfilled his promise.

Another celestial deity who accompanied Vishnu on earth was Adi Sesha, the serpent on whose coils Vishnu sleeps. When Vishnu was Ram, Adi Sesha was Laxman and when Vishnu was Krishna, Adi Sesha was Balarama. Once Laxman complained to Ram, “I am tired of agreeing with you because you are my elder brother.” So Ram said, “In our next life, you will be the elder brother and I will be the younger brother. You will still agree with me because you will realize you agree with me not because I am elder or older but because I always uphold dharma.”

Stories linking the epics of India, the Ramayana, the Bhagavat and the Mahabharata, are very common in mythology. Another story states that when Ravan kidnapped Sita, Ram was inconsolable in his grief. All the trees and the animals and the men and women of the forest tried to hug him. But he rejected their embrace. “Only Sita can touch me with such affection,” he said. Then he saw the disappointed faces of everyone around who was reaching out to comfort him and said, “In my next life, when I am Krishna, all of you shall be gopis and we shall dance together in Madhuvan.”

Perhaps the most interesting link is the story connecting Vishnu’s relationship with the sun-god Surya and the rain-god Indra. In the Ramayana, Vishnu is Ram and he supports Sugriva, the son of Surya, in his fight against Vali, the son of Indra. To balance the relationship, in the Mahabharata, Vishnu as Krishna supports Indra’s son, Arjuna, in his fight against Surya’s son, Karna. So what appears as unfairness in one life becomes fair when one considers the previous life.

Thus the events of the Mahabharata and the Bhagavata cannot be explained without understanding events in the Ramayana. One is the consequence while the other is the cause. Why was this weaving of epics done, one wonders. This weaving turns every epic and every episode in the epic into pieces of a vast jigsaw puzzle. To understand the entire puzzle you have to interlock all the stories and the characters and events. Nothing stands in isolation. Everything is dependent on something else. Thus to know something about Indian mythology, you are forced to study all. And so it is about life. To understand today’s India you have to undestand yesterday’s India. We are the products of the past. Today’s Krishna was yesterday’s Ram and today’s Kansa was yesterday’s Ravan.