Of Weight and Value 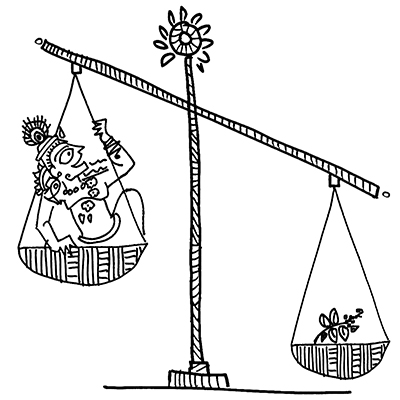 Of Weight And Value: The human mind has power to create value and also strip value.

One of the most peculiar things about the Harappan civilization is its obsession with weights and measures. They had binary measuring systems and decimal measuring systems. They also had pans for measurement. The people of Indus were particular about measurement. The weights and volumes were standardized and uniform and did not deviate much, spanning a period of 500 years. This indicates a strong trading culture and an obsession with fairness and balancing things to avoid conflict. But weight and value are not the same thing. The difference becomes an important role in later literature.

You can weigh food but it is hunger that determines value. The more we want something, the more valuable it gets. The less we want something, the less valuable it gets. In the Buddhist, Jain and Hindu stories, King Shibi saves a dove from an eagle. The eagle then demands that the king provide him with food because the dove was its natural food. The king offers his flesh equal in weight to that of the dove. To his surprise, he finds no matter how much flesh he cuts from his body and places on the pan, the dove’s weight turns out to be more. He is forced to cut out most of his flesh. Even when he is reduced to his bare bones, he still is not able to balance the pans.

The story ends with everybody celebrating the great sacrifice of the king. But what is often overlooked is the attention drawn to the weight of the eagle’s hunger that is greater than the weight of the flesh offered. The eagle does not value the flesh being given, as it is not enough for all his meals. Did the king not promise to satisfy all his hunger, not just the hunger of a single meal?

In the Bhagwat Purana we are told the story of how sage Narada asks Krishna’s wives to give him Krishna. The queens refuse. Then Narada asks for something equal in value to Krishna. Krishna is then put on one pan of the balance and on the other pan the queens put their valuables. Satyabhama puts all her gold but that gold does not balance Krishna’s weight. Rukmini puts a sprig of tulsi leaves, stating that the sprig was an indicator of her love for him. The tulsi sprig is heavier than Krishna. The weight of gold does not match the value established by the symbolic sprig of love. This reveals that the craving for love is far greater than the object of love. Rukmini’s love is greater than Krishna himself. No amount of wealth can match the object of love; in other words, you can never buy love, though many try. For love satisfies our relentless desire to be seen, appreciated and indulged.

There is never going to be an objective value that satisfies our hunger for food, or our yearning for love. In materialistic philosophies such as communism and capitalism, the naked man who owns no property is a poor man. But in Buddhism, Jainism and Hinduism, the naked ‘digambar’ is greater than everyone else, as he does not value property and seeks to own nothing.

This idea is lost in the modern world, where value is placed on things, not on contentment. Doctrine of contentment is viewed cynically. We are told in ‘woke’ circles that feudal societies want the rich to be ambitious and the poor to be content, that value is twisted such that the poor are satisfied with less and the rich continue to indulge their greed, calling it ‘the big vision’.

We cannot make the world a better place by indulging desire and providing value alone. Instead, we have to simultaneously work towards controlling, or outgrowing, hunger. The human mind has the power to create value – turn gold or jade or paper into currency. The human mind also has the power to overcome the yearning for value. As long as we indulge our insatiable desire to extract value from the market, we will remain hungry and dissatisfied. Our mind that can turn a rock into a god can also turn away from the need to turn rock into a god.

The Upanishadic phrase ‘Aham-Brahmasmi’ refers to the human ability to grant value, and strip value. What matters when we are young should not matter when we are old. Report cards and measuring scales that matter a lot when we are students, should not matter when we are retiring. If we grow up generating wealth, we should grow old distributing wealth. If we are the hungry hawks in our youth, we have to be generous Shibi as we grow older, and wiser. Satyabham’s gold matters at one stage in life, but then eventually we reach a point where Rukmini’s tulsi makes all the difference.