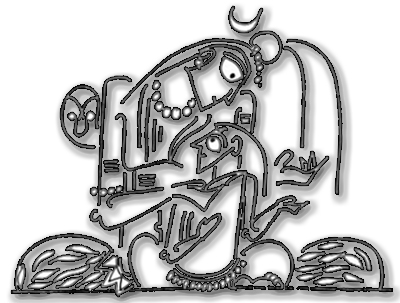 With the appearance of Ashok Sundari on the “Devon ke dev Mahadev” teleserial on LifeOK channel, many are wondering since when did Shiva father daughters? Everyone has heard of his famous sons: Ganesha and Kartikeya. But daughters? Ashok Sundari? Where did she come from?

The whole idea of Shiva Puran is to describe the gradual socialization of Shiva, from hermit to householder. And this means becoming a father and taking responsibility for fatherhood. As a hermit, Shiva is detached and disengaged with the world. But the Goddess is determined to make him participate. In that, she is helped by Vishnu and all the other gods. In Tamil temple lore, Vishnu is her brother and Brahma her father. Together they want this ascetic to establish a home. Only then will his great wisdom and his powers benefit the world at large.

And so children are required. Thus sons are born. Notice how the two popular sons take care of humanity’s most basic needs. Ganesha is associated with food that helps us cope with our fear of starvation. Kartikeya is associated with warfare that is necessary to defend ourselves from predators. Thus through his two sons, Shiva provides and protects.

But this ‘male preference’ has not been unnoticed by the devotees and the sages. And so across folk traditions there are references to his daughters.

The story of Ashok Sundari comes from the vrat-kathas of Gujarat and neighboring areas. She was created from a tree by Parvati to give her freedom from loneliness. She was called Ashoka as she got rid of Parvati’s ‘shok’ or sorrow. And Sundari because she was beautiful. Nothing much is known of her except that she was present at the time Ganesha was beheaded and she hid behind a sack of salt in fear, angering her mother, who was later pacified by her father. She is associated with salt, that ingredient without which life is unsavory.

In Shiva temples of Tamil Nadu, one occasionally comes across Jyoti, the goddess of light, who emerges from Shiva’s halo and is the physical manifestation of his grace. She is commonly associated with Kartikeya.

In Bengali folk tales, Mansa, the goddess who cures snakebites, sister of Vasuki, king of snakes, was born when Shiva’s semen touched a statue carved by Kadru, mother of snakes. Thus she was Shiva’s daughter, but not Parvati’s child, much like Kartikeya, who was born of Shiva’s semen but not in Parvati’s womb. Parvati, known in the folktale as Chandi, does not like Mansa and is even jealous of her, suspecting she may be Shiva’s secret wife. It is Mansa who saves Shiva when he drinks poison during the churning of the ocean and identifies herself as Shiva’s daughter. But Chandi is so blinded by jealousy that she blinds Mansa in one eye. Tired of household quarrels, Shiva abandons Mansa but gives her a companion called Neta. Later, when Mansa gets married, Chandi tells her to go into the bridal chamber wearing snakes as ornaments, frightening her husband, Jaratkaru, who runs away. Abandoned by father and husband, the unhappy Mansa becomes a bitter angry goddess who has to be appeased if one wants to escape death by snakebite.

The idea of devotees ‘creating’ gods and goddess is not unknown to Hinduism. Few realize that Santoshi-maa did not exist in the Hindu landscape before the famous film in the 1970s. Is Ashok Sundari the next of our 330 million gods?