Between the Rangoli lines 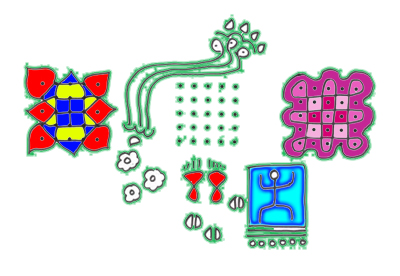 Every morning, in my neighborhood, I find a woman painting pretty patterns using rice flour paste just outside the door of her house. She is from Andhra Pradesh and she calls it Muggu. This practice is seen in millions of households across India, mostly in the South where it is also called Kolam. The patterns extend beyond the doorway to the walls of the house too. It is called Alpana in Orissa and Bengal, Aripan in Bihar, Rangoli in Maharashtra. Once, this was a daily practice. In many parts of rural India it is still so. But in most parts of India, this practice is restricted to festival time, Diwali being the most popular one. Other times are Kojagiri, the full moon before Diwali, and Krishna Janmashtami, the birth of Krishna. These patterns are also seen during weddings. This practice of decorating the threshold is even seen in Parsi households.

The patterns are done only by women. And the material used was once rice flour but now synthetic powders, even paint, are being increasingly used. And for the busy household there are readymade sticker bright Rangolis.

Does this have any logical purpose? Yes, say the rationalists, who say the rice flour is meant to feed ants so they do not enter the house. Does it have any aesthetic purpose? Yes, it enables the homemakers make the house pretty. But that still does not explain why it has to be done every day, by women, at the doorway. That the practice becomes elaborate during festivals and rites of passage, indicates that this ritual is rooted in emotion, myth and magic.

In all probability, these are talismans, bringing in good luck into the household. This was a ritual where the matriarch of the household was the grand priestess. This is how she harnessed cosmic energy and brought it into the household. This is how she anchored divine grace to the house. This was a ritual that she did on her own, without the support of any men or priests. But to do this, there were rules. She had to be a married woman with children. Widows were not allowed to do this and virgins could only support their mothers. Only male priests were allowed to make a rangoli but only as part of a ritual; the rangoli was used to mark out the sacred space where the rituals were performed. This was different from the woman’s rangoli that transformed the house into a sacred space.

Typically a Rangoli begins with a grid of dots being made. The more the dots, the more elaborate the patterns. Given the same grid, different women would see different patterns in it, and draw accordingly. So if one walked down the village street, one would find different households with different patterns.

Different households were run by different women and each woman had her own identity and her own sense of aesthetics which she expressed each day in her Rangoli. While the grid of dots united them all, as did the ritual of making the Rangoli, the specific pattern reminded all of the differences. Every woman did her best but no one compared or tried to turn it into a competition. The point was not to be better than others but to be the best as one could be, for one’s own house. Through these beautiful but different patterns, generations of Indians were taught to be tolerant, to enjoy other people’s patterns and enjoy one’s own, without being judgmental.

Once in a while, the patterns were fixed as during festival times. Then the women had to set individual creativity aside and align to the demands of culture or tradition. Those were the days when the women were part of a larger whole. The village rules became household rules.

The Rangoli was never permanent. It was wiped off each morning, reminding all that things change. Yesterday’s bad mood can be become tomorrow’s good mood. Bad patterns can give way to good patterns. The household changes and so do its patterns. People learn and grow and with that patterns become more confident and more joyful.