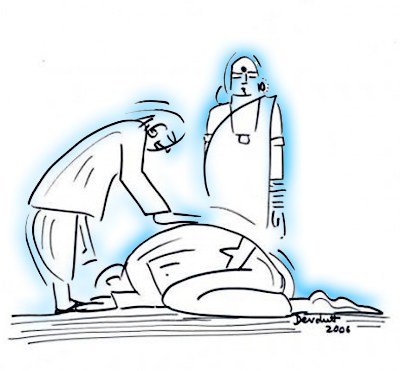 A lot has been written by children of FOB parents about their coming of age in the west while being brown and sometimes Hindu. Unfortunately, little is any practical use for it. Much of this genre of writing is about the consequences of omissions, mistakes, short-sightedness and such on the part of the FOB parent. While it is great to know what not to do for and to our children born in the west, what we really need is help to get it right.For me, that help came in the way of a website that belongs to Dr. Devdutt Pattanaik who among other things is Chief Belief Officer for the Future Group. Browsing through the articles on his website, I found the thought process and style of writing that would resonate with any young person who is curious about Hinduism irrespective of where they are born or raised. For a parent, there is a lot to learn too – understanding the underpinnings of Hindu mythology and more importantly how to introduce children to it.

Dr. Pattanaik was kind enough to answer some questions are relevant to parents like myself.

2. What are some of the things a parent can do to get their child curious about their religion and culture without actually forcing them into learn about it ?
By making the rituals fun. Rituals are about doing things. Rituals are choreographed to connect with us symbolically. Making rangoli can be fun. Cooking prasad can be fun. Doing puja — bathing the image, dressing it up, feeding it, singing songs to it — can be fun. The child will notice that the fun is associated with a deep reverence. Then he will question. Often this the point where parents turn rituals into ‘holy cows’ and lose the opportunity to help their children gain an understanding of their cultural world.

Parents, most often because of their own lack of knowledge, turn the sacred into scary. The child will sense whether the parent truly respects the rituals and finds them empowering or if he doing it merely to reinforce his threatened identity. Often no one knows the reason why a ritual is performed and that is ok. Parents have to admit that they don’t know the reason and they are doing what their parents did and following tradition. Its ok not to know. And it is not necessary to understand everything in the world. Sometimes understanding comes over time. I notice many people have this urgency to know the meaning of rituals immediately. The search for meaning is either frustrating or leads to some rather bizarre conclusions.

3.When it comes to Hindu mythology, there are either over-simplified books (geared towards kids) and there are the scholarly tomes. Neither is a good fit for a curious young person who needs something in between they can read independently. What kind of books would you recommend for them ?
My books!  I became a writer because I saw this gap. Often the answers are not what the parents expect. The problem is that authors are burdened by wanting to make Hinduism look nice. The measuring scale is that of other religions. As a result writing becomes apologetic and defensive. People are trying but often I find writers have a poor understanding of the subject and so are unable to appreciate the complexities and so end up with awkward prose.

Try explaining the idea of Krishna surrounded by hundreds of milkmaids doing Raas Lila to a child. Are those girls, Krishna’s friends? So is it ok for a boy to have many girlfriends? Are those girls his wives? So is it polygamy? Rather than answer such blunt uncomfortable questions, some writers escape into metaphysics — using words like Paramatma and Jivatma which, unless you are a believer, sounds like gobbledygook.  At one level they are true, but like all symbols, there is no one answer. There are layers of answers. Many answers one finds are usually not what parents expect or find appropriate, because these stories are catering not just to children but adults.

To simplify them without being simplistic (and sometimes stupid) requires a lot of effort. The story is trying to show the idea of love that is unfettered by law and custom; thus the milkmaids are in no way related to Krishna. Now this idea can be quite scary to a parent. One has to go in stages. Simplistic answer initially then more complex ones. There is no one standard answer. There are many answers, each one suiting one’s age, one’s temperament, one’s emotional and intellectual maturity. This is Hindu pluralism.

4. Do you think children actually benefit from hearing or reading a watered-down versions of Ramayan and Mahabharat where the complexity of the characters and their motivations is all but lost ?
As people mature, stories evolve. The story told to a three year old is different from that which is told to a thirteen year old. We must keep telling children there is more. Provoke them to be curious. Include them in conversations about the characters. Say the mother and father discuss how Karna was killed. The child can overhear the various arguments. There is no right answer so one must allow the arguments to stand strongly without tilting one way or another. The child by overhearing this, again and again, will be able to appreciate the complexity of life — as Hinduism seeks to portray.

5. What would enable a child make the connections between religion, mythology and day to day life in the modern world ?
I think by making religion and mythology part of day to day life. So lets say we are discussing the war in Afghanistan. This can be associated easily with the Ramayana. Just as Ravan had no right to kidnap another man’s wife, the terrorists had no right to destroy the World Trade Centre. Of course, as the child grows up, the arguments can get more sophisticated. Why do we assume that the Americans are Ram? Maybe the terrorists see themselves as Ram, maybe the attack was the burning of Lanka. This will lead to discussions and debates. In these discussions and debates, pros and cons, the Argumentative Indian is born — one who is able to see things from multiple points of view before taking a decision.

6. How can learning about Hindu mythology the right way enable a young person to develop a deeper appreciation for the universality of the main concerns in all religions?
Yes and no. All religions have common features. But they also have uncommon features. Many people overlook the latter and this leads to conflict. For example, Hindus do not have the notion of Original Sin or Prophet. But like all religions, Hinduism is deeply concerned about what is appropriate social conduct (dharma) and happiness.

7. Do you have any recommendations for daily reading that may help a young person to navigate with greater confidence through their life – specially when the world outside is very dissimilar to the world inside their homes ?
Step 1 — Read the Amar Chitra Katha. Step 2 — Discuss the stories and don’t let the comic be the end. Discussion is the key. Stories are to be told, not read. Step 3 — don’t reach a conclusion, don’t justify, don’t apologize, don’t defend …..just try and understand why the story was told by our ancestors.

8. Finally, if  a parent’s goal is to enable their Hindu child to be an open-minded, well-adjusted global citizen who is deeply aware of their own religion but is able and willing to embrace learning from others as well, what must such a parent not do ?
Have confidence in Hinduism. This means that one does not have to put down other religions just to feel true to one’s own religion. Personally, I find the ‘cult of outrage’ that is spreading like an epidemic a problem. Everyone gets outraged when they feel their religion is being mocked or threatened. Instead of outrage, we need more understanding, love, inclusion and forgiveness. We must remind ourselves that while Ram kills Ravan, for a crime, he also acknowledges Ravan as a great scholar and teacher. Thus a holistic view is taken — parts that are condemned are condemned but not the whole.