Modern people want to feel liberal, so they construct a past that’s conservative 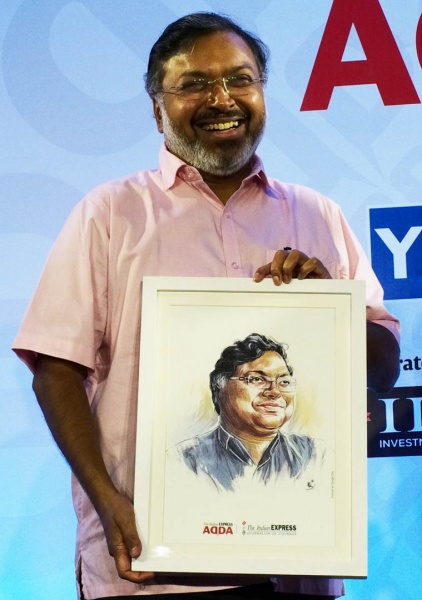 The latest edition of the Express Adda in New Delhi hosted author and mythologist Devdutt Pattanaik. In a discussion moderated by The Indian Express Literary Editor Pratik Kanjilal, Pattanaik talked about what’s making women speak out, the many Ramayanas and why religion is not an adversary of queer love.

On the #MeToo movement
In Hindu mythology, there is the fundamental idea of Matsya Nyaaya, the law of the fish. The crude English translation is jungle law – where the predator runs after the prey. There is nothing immoral about it because the predator is doing it for food, for sustenance, for survival. When the human starts to devour other human beings in order to indulge his sense of self, something has gone wrong. He has lost his humanity. And this is what has happened. Suddenly people are calling it out and saying that “we will not be prey to people who are devouring people”. And it is a psychological devouring, where I disrespect you, I disrespect your space, I disrespect your body. In fact, I disrespect you so much that I have turned you into an object. That’s the movement in philosophical terms. This is what the cry is about. You cannot violate me. You are devouring me, and this is unacceptable. I am another human being, I have boundaries and rules.

On action, reaction and the cycle of things
It’s a cyclical thing. The Jains have the concept of avasarpini-utasarpini, going up and down, good times and bad times, and therefore, you find a wave of ideas coming, as one idea leads to another. Like World War II forced people to acknowledge women in the workplace; they had to work in factories in many parts of the world. When the war was over, women were asked to go back home, and they were like, “no, we are not going back home”. And the world changed. Once that wave comes, and when you start talking about equality, people start talking about sexuality. So, one thing leads to another. Every action has a reaction. So, when insecure men behave in extremely pathetic ways, you do have secure women standing up and raising points. This will have consequences on relationships between men and women, relationships in power spaces, and what will be considered appropriate and inappropriate.

On Section 377, religion and queer love
It was December 11, which also is my birthday, in 2013, when I heard that Section 377 had been upheld and homosexuality has been recriminalised. I was devastated. I wept so much. It was the most heart-wrenching moment because I felt betrayed by the Indian state.
I like to let my work talk about it, but I went out of my way to write books about queer sexuality in the Indic traditions – Jainism, Buddhism and Hinduism. Later, I wrote a book titled I Am Divine So Are You (2017), which spoke of how Buddhism, Jainism and Hinduism are allies of queer sexuality, and not adversaries. And it was sponsored by the Church of Sweden. Religion is always somehow weirdly presented as an adversary of sexuality. There are whole bodies of knowledge that are being shoved aside by people and I am driven by the desire to get Saraswati out of the closet. Saraswati belongs everywhere, she has to flow everywhere. And I work really hard to make knowledge accessible.

On reaching out to a young audience
How do I contextualise mythology and contemporise it for a young person going to college who only has time for Instagram.

That’s my target market, because if I don’t talk to that generation, who do I talk to? And how do you make it cool without trivialising it. They are smart people, it’s just that the language is different. And you have to figure out a way of touching them, so that’s my challenge. So when I wrote about sexuality and my idea of feminism, it was based on my mythological knowledge. For me, everything comes from mythology. Mythology is the map of the human mind. So anything that exists in the human mind, I’ll find something in mythology.

On tradition vs modernity
Modern people invent tradition. Because modern people want to feel “liberal” and “modern”, they will construct a past that is conservative. And you see that in writings all the time. So Sita has to be this creature who has no voice of her own. But when you actually read the Valmiki Ramayana, you’ll be like, ‘this lady seems to have a voice’. In fact, there’s a dialogue where Ram says, ‘Whenever I ask her to do anything, she says ‘no’.’

Janakputri, Janaki, Maithili and Vaidehi – these are words to show a silent strength functioning alongside. It is not evoked when you see some of those television shows because they want crying, suffering women because that’s what gets you the TRPs. You want to see women as victims.

On Ramayana and the crisis of kingship
Ramayana is written with Ram as the protagonist, but it’s not really the story of Ram, it’s the story of a king and his journey. And good kings don’t have to be good husbands, as we do know. And that’s the mistake we make. We want to see Ram as a human. Ramayana and Mahabharata both deal with the crisis of kingship.

On our textual obsession and the many Ramayanas
There are many Ramayanas which are in the oral traditions in Andhra Pradesh, Maharashtra and Odisha. Ramayana is complex, it’s a tradition. This textual obsession comes because of a Protestant mindset. The Protestants were the ones who said that the text is important and therefore, the printed Bible became important. This mindset was brought to India by the British. So, they also said the same thing, “let’s look at the original document”. They started teaching Buddha to the Buddhists.

On his journey
I am trained in medicine and worked in the pharmaceutical industry where in my free time I would read mythology. Before mythology made money, I had a day job. I am a structuralist and suddenly realised that what we call modern management and what is presented as a rational way of thinking is not rational at all, it is completely mythic. And we realised that what we call management by objective, which is the mainstay in IIM-Ahmedabad and several universities, is based on the Book of Exodus. Someone asked me to write something on it. I started writing and luckily, one of my friends who heard it, put it in the corporate dossier. I started publishing it and the articles became very popular.

On the dark hold of caste
If your heart is not opened, no law in the world is going to change the world. And this whole approach that through laws we’re going to change the world is an absurd idea. Laws domesticate the animal. It doesn’t turn the animal into human. Laws, and better laws, won’t create a better world. You have to be psychologically transformed. The caste system is a psychological problem. You have denied humanity to people. Jab kisiko tum paani nahin dete ho (when you deny people water), that is the end of humanity. That being said, it is a complex system which evolved over 3,000 years. Everywhere in the world, there is hierarchy. What makes jati dark and very strong is the notion of purity. This is really the dark side of Indian thought – ashuddh and shuddh. What is pure and what is impure? For instance, vegetarian food is today considered pure, non-vegetarian is considered impure, although the gods and goddesses were offered alcohol and meat all the time. Menstrual blood is impure, semen is pure. So, there is the politics of bodily fluids.

The jatis were designed around different vocations but certain vocations become impure, now that’s a problem. So the person who cleans your sewer, without whom the whole society won’t be able to function, has to be given the most dignity but he’s given the least dignity. On his new book
Shyam’s story is exciting because it’s a journey from the feminine world into a masculine world (Shyam: An Illustrated Retelling of the Bhagavata; Penguin). So the early part of his life is in the Bhagvata, where it is the mothers, the lovers, and the gopikas. It’s a journey from the world of women to the world of men, which is the Mahabharata, the Kauravas, the Pandavas and the Yadavas. It is a journey from butter and milk to blood. From love to property and dispute. It’s a very large life. It’s a lifetime. So, you have a god who is an infant, then a toddler. He is also a prankster, a lover, then he becomes a refugee, a husband, a father, a friend and an elder. He’s the old man who realises his children don’t listen to him – a god whose children don’t listen to him – who dies a lonely death, like Ram, alone in the forest. His entire life is incredible and I couldn’t find any book which told his story from birth to death.