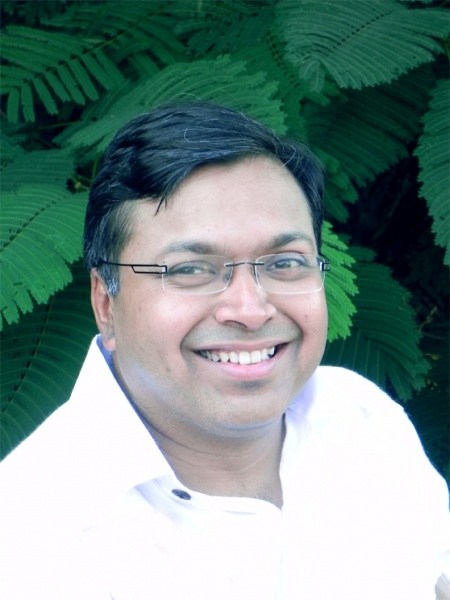 tgbc: You are a prolific writer, drawing upon the myths and legends of India. How do you decide what might appeal to children?

Devdutt: I feel children love stories simply told. So I tell them stories in a very simple way. Children tend to be fascinated by animals and art and monsters and so I focus on those a lot.

tgbc: At a 2000 conference organized by the National Book Trust, Radhika Menon asserted that there is nothing new in Indian literature, that it simply retells the classics over and over again.

a.What is the value of continuing to retell the classic stories? Who is the audience for these?…..
Devdutt : The assumption here is we ‘know everything’ that the ‘old’ stories have to tell…that is human arrogance at work…..I try hard not to be arrogant…and the ‘old’ stories reveal so much to me…..for the child ‘old’ stories are ‘new’…..it is rather presumptuous of a parent/publisher to think what is old for the parent/publisher will be old for their child, no? …. I guess people who are obsessed with the young only are embarrassed by the old.

b.In the years since you have been writing, have you seen any significant shifts? ….
Devdutt: I don’t see the point of ‘shifts’ …thats for a literary critic/historian or an academic……I feel looking for shifts is like seeking a new direction in the ferris wheel we call life. Its a great delusion that our lives are somehow different from that of our ancestors, that our heartbreak and hope are different, because we travel in cars and have cell phones, and we speak English. Sounds rather pompous to seek something ‘new’ without really knowing the ‘old’.

tgbc: How important is it for there to be options to see one’s own culture in literature? In other words, does it matter if an Indian student is reading books by English or American authors? Or vice versa?…..
Devdutt: Parents have the option of denying their children their heritage. Its a valid choice. Its fine if children are not interested in their culture. The regrets come later when parents and children discover they have no roots, like children who were never taught the mother tongue of their parents. Life moves on. Languages, cultures, stories die.

tgbc: What liberties do you think can be taken in such a genre?….
Devdutt: I don’t understand the question….Liberty?….Is there an authority out there stopping anyone?

tgbc: What formats in this genre, according to you, work better at engaging children?……
Devdutt: Children are not a homogenous entity. Every book has its reader.

tgbc: How do considerations of class (social, financial) and audience impact the content and form of children’s books in India? Has it impacted what you have written for children?…….
Devdutt: The poor cannot afford books. The rich can. That does not mean the rich actually read the book bought for them, or that the poor will read the book given to them free. Curiosity and interest in books have nothing to do with class. Rest is all about access and availability. To write keeping ‘class’ in mind is rather horrifyingly un-ethical, I feel. Are you suggesting authors should write differently for rich children and poor children? I find the thought deplorable.

tgbc: Do illustrators get the credit they deserve? How can we promote their work, vision and art fairly?
Devdutt: I don’t illustrate for credit. I don’t understand the need for it. You illustrate because it makes you happy. If a publisher likes your work, and finds it financially viable, he will publish it and pay for it. If the children love the illustrations, there will be greater market demand for it. That’s all there is to it. Why would anyone want more?

tgbc: What new content do you think needs to be developed to engage children with our rich cultural heritage?
Devdutt: There are vast number of stories that are yet waiting to be retold. But for many children, and their parents, India and its culture is uncool. We are no competition for Barbies and Disney and Pixar or various Toon characters on TV.

tgbc: What have you planned next in your writing?
Devdutt: That’s a secret.

tgbc: What are you reading currently?
Devdutt: Mani Rao’s Bhagavad Gita in poetry