Food is truth: What the Hindu gods are given to eat and why 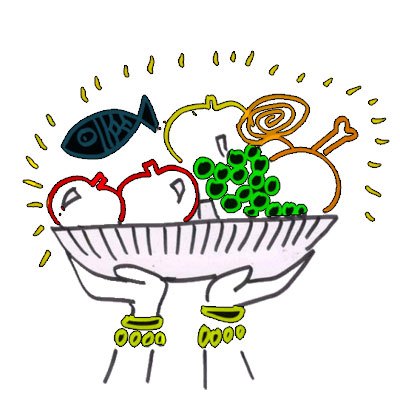 Why is anna, food, accorded so much importance in our culture?
In Yoga-shastra, our body is called annakosha, that is, flesh formed from anna. Our flesh then becomes food for other animals.

All living beings need anna for their annakosha. Plants eat the elements, especially the five major ones, the pancha mahabhut, including sunlight and water. Plants, in turn, are consumed by animals, which are then eaten by other animals.

The Upanishads give a lot of importance to food. Without food, the world cannot exist. We can discuss atma, meaning, talk of high intellectual and spiritual matters, but at the most practical level, “anna hi satya hai” – food is truth.

It is emphasised in the texts to remind us about the meaning of existence. Anna is called Brahmin, the way bhasha is called Brahmin. God resides in food; the one who eats is god, what you are eating is also god. The concept that “god is life and life is food’ is repeated constantly in mantras and other texts so that we don’t forget the importance of food.

The bhog offered to the gods is mostly milk and fruit. Are these their favourite foods or is there some other reason behind it?
You can take this literally or metaphorically. The earth is known as Vasundhara, that which holds up vasu, or plants. So if the earth is a cow, plants are its milk. In the Vedas, milk is given a lot of importance. Ghee, a milk product, is offered during yagnas to Agni, said to be the hunger of the gods.

Panchamruta contains five milk products – milk, both raw and boiled, ghee, butter and yoghurt. Go-ras, cow urine, honey and jaggery are all mixed in and offered to the gods. In the Puranas, it is said that Vishnu lies on Kshir Sagar, an ocean of milk.

So, nature, prakriti, is visualised as an ocean of milk. Whatever you get from nature is like milk – that’s the analogy. Which is why gods are always offered milk.

Fruit may be raw or ripe. All fruits have different tastes, and are offered to the gods depending on the type of fruit. Devis are given sour and spicy fruits. Lakshmi is offered amlas, the Indian gooseberry, lemon and chillies. Vishnu is given sweet fruits. Shiva is given dry fruits perhaps because they’re found in cooler climes, or because rishis carried them when they journeyed.

What are the favourite foods of Shiva and Vishnu?
One way of looking at it is that Shiva is a vairagi, a tapasvi who wishes to stay away from domestic life, while Vishnu, in the form of Rama or Krishna, lives a householder’s life. So Shiva is offered raw unprocessed milk and Vishnu, processed milk products like butter and ghee.

Shiva is content with whatever is available. But because Vishnu is a householder, his offerings require effort; he needs manufactured products. To extract the butter from the milk, you have to put in a lot of work, or you will not see results. A lot of value is accorded to shram, labour. So, typically, Vishnu is offered cooked food.

During the Annakuta festival around Diwali, Krishna is offered a mountain of food, the chhappan bhog, or fifty-six items – because food is extremely important for a householder. The food offered matches the lifestyle of the god.

Do only gods like bhog; do goddesses not like it?
For devis, traditionally, there would be blood sacrifices – goats, buffaloes, birds. These days it is not popular because of animal rights. A devi is Raktavilasini, one who loves rakt, blood.

We can take it literally, but there is a metaphorical aspect to it. Bhudevi, the earth goddess, is considered to be a cow whose milk sustains everyone. But how will she sustain herself? In the form of Gauri, she gives milk, and in the form of Kali, she drinks blood – the cycle of life, as it were. This is to emphasise the idea that whenever you eat, you’ve killed something, sacrificed someone, offered bali.

Plant food comes from farms which were created after decimating forests, destroying mountains and rivers, killing countless creatures in the process. The Devi always reminds you that to build your civilisation, sanskriti, you destroy prakriti, nature. And so she demands blood, even narabali, human sacrifice.

In the Bhagavata Purana, Bhudevi tells Vishnu that people are troubling her and she wants to drink their blood. In fact, the secret reason behind the wars in the Ramayana and the Mahabharata is that Bhudevi is thirsty. There has been too much adharma, immorality, and man has exploited her terribly, and now she wants blood in return. So, in the form of Rama and Krishna, Vishnu makes the wars happen. These are a kind of narabali.

There is a story in the Mahabharata in which Arjuna and Bhima are quarrelling about who showed greater prowess during the war. They are told that there is a head atop a mountain who can give them the answer since he observed the entire war from up there. Some say the head’s name was Barbarika, others say it is Arvan. The head said, “I don’t know any Kaurava, Pandava, or great warrior. I only saw Bhudevi, in the form of Kali, drinking the blood of all the warriors as Vishnu’s Sudarshan chakra decimated them.”

Is there any specific story regarding bhog in the Ramayana or the Mahabharata?
In Ayodhya, there’s a place known as Sita’s kitchen. Sita was a very good cook. And Draupadi was famous for her generosity. Nobody went hungry from her kitchen. During their stay in the forest, after being exiled from the palace, the Pandavas don’t have anything. Draupadi feels bad that she won’t be able to feed whoever comes to her door.

To tease her, Duryodhana sends Durvasa and some other rishis to her. They ask her for food. She requests them to go and bathe in the river, while she prepares a meal for them. Once they depart, she goes inside and starts weeping in despair.

It is then that Krishna arrives. He says there must be something that she can offer the rishis. Dismayed, Draupadi shows him the empty vessels, saying that she’d fed her husbands and then eaten whatever little remained. Krishna picks up one leftover grain of rice and eats it. He is satiated and because of that, so are the rishis.

They, in turn, feel they will end up disrespecting Draupadi if they don’t eat anything she offers, so they make a hasty exit. This is how Krishna protects Draupadi’s dignity.

However, Krishna tells Draupadi to pray to Surya, the sun god, for a solution to her problem. Draupadi does so and Surya gives her a thali, plate. There’s a phrase “Draupadi ki thali”, which is similar to the concept of “mataji ka bhandar”, implying that there will always be food in the kitchen. Each day, Draupadi’s thali stayed full until she ate. She would feed hundreds of people and be the last to eat. But once she had eaten, there would be no more food till the next day.

In these stories, there are no male cooks. How is that possible?
There are such references in the Mahabharata. Nala is a powerful, handsome and rich king, married to beautiful Damayanti, and their life goes well. Later, due to unfortunate circumstances, they become so poor that Nala has to become a servant to another king, and cook for him.

This story is more famous in Kerala. According to the Malayalam Mahabharata, the world’s greatest cook is Nala. Even now, when you find a good male cook, he’s compared to Nala.

I’ve heard that people offer betel leaf, paan, to the gods. Why?
Offering paan and supari, betel nut, is an Indian tradition. At the end of a meal, you eat paan–supari, which indicates all is well with your life, and that you are prosperous and content. It is a sign of a happy grihastha jeevan, household life. This is offered only to married gods, never to Shiva.

In some images, Lakshmi offers paan to Vishnu. It’s a sign of ayyashi, merrymaking, and of luxury, success and happiness. And we want all these in our lives.

What is shriphal?
Shri is Lakshmi, phal is fruit. It’s a fruit that you get round the year and one which is easily available. These are fruit which generate on their own, and don’t require too much effort, like coconuts or bananas. These are always kept in the thali for puja. Not only are these nutritious, but they are also a symbol of endless wealth and affluence.

Sometimes rice is also called shriphal. Under a kalash, pot, for a puja, you spread rice, and a coconut is placed on the mouth of the kalash. These are signs of Lakshmi. They are found in abundance, and there will be prosperity wherever they are.