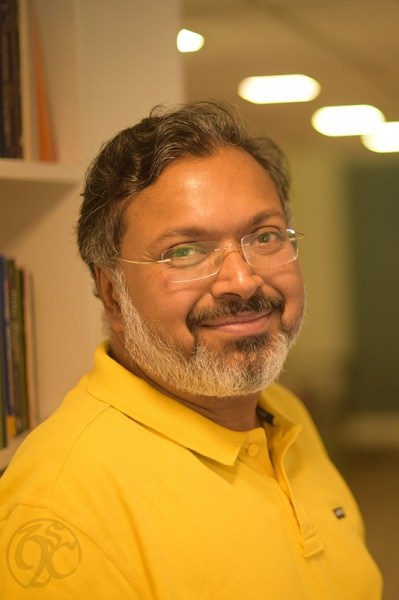 Devdutt Pattanaik is undoubtedly one of the most authoritative names when it comes to interpreting Indian mythology. Apart from deliberating upon and discussing in detail the vast Hindu mythology, he has also simplified the complex books and epics connected to Hinduism, thereby bringing thousands of curious readers closer to an ancient and rich culture.

In an interview to thestatesman.com, Pattanaik explains the meaning of mythology, superstitious practices, Section 377, Sabarimala verdict and Ram Temple. He also reveals what to learn from ‘offence’.

Many equate ‘mythology’ to myth, as the dictionary definition goes. What do you think the word means? And why should we discuss Hindu religion in the context of mythology?

In routine use, myth is equated with fiction. However, academically, myth refers to a cultural truth expressed through story. In the 19th century, monotheistic religion was seen as truth, and polytheistic religions as false, hence myth. But today we consider monotheism as well as polytheism to be myth. By extension, even atheism is a myth, for that too is a cultural truth, of some people. Myth is what binds people together hence integral part of being human. Without it we cannot have tribes or nation-states or corporations. Mythology has two means. First, it is the body of stories, symbols and rituals that communicates a cultural truth. Second, it is the study of that cultural truth. All religions and ideologies, not just Hinduism, are discussed in the context of mythology, at least in academic and scholastic circles. Marxism is as much mythology as Abrahamism as Capitalism as Buddhism as Hinduism. Our prejudices locates one over the other.

Is there a difference between mythology and religion?

Religion essentially referred to monotheistic and essentially Abrahamic religions. It was pitched against polytheistic faiths that were called myths and atheistic faiths that were called ideologies. Today religion refers to people who believe that there are supernatural forces that shape our lives. But remember that justice and equality are also not natural phenomena, they are cultural concepts, cultural truths, hence myths, that shape our lives and society. Like all myths, we assume they are truth and should be universal.

The word mythology brings to the mind Greek, Hindu, Nordic, Egyptian, etc., but not Islamic or Christian. Are there no mythological elements in Quran and the Bible?

Well it does to all people who study mythology. We are still stuck in 19th century colonial understanding of these subjects. It is interesting you do not mention Capitalism and Communism or socialism when discussing mythology. That too reveals a refusal to acknowledge atheistic material ideologies as myth, and insisting they are fact, when they are in fact cultural fiction.

Offence, these days, is found in abundance. There are people who take offence at the drop of a hat. How do you manage to steer clear of the ‘extremely sensitive’ kind?

We have valorised and glamorised victimhood. And so to be valorous and glamorous you have to be a victim, and so get hurt. And so we want to be offended all the time. It’s the vocabulary of modern politics. People are offended by my work. And for me, that is ok. Its ok to feel offended, even when no one wants to offend you. It indicates an opportunity to grow up.

With Jaya and Sita you gave a scientific dimension to the numerous miracles that Ramayana and Mahabharata cite. Did you at any point feel concerned that such an attempt might not go down well with the staunch believers?

No, I did not. Maybe you saw ‘science’ in my writings. Science and logic are not the same thing. Indians tend to confuse logic with science. Science is about measurement and evidence. Science is logical but all logic is not scientific. My writings seek the logic of cultural truths. As I do not believe ancient people were stupid (as some modern ‘rationalists’ do). You seem to assume Hindus are like Christians and Muslims who feel scientific/rational things are at odds with matters of faith. Lets not use Western templates of religion to explain Hinduism. That is something Leftists and Rightists do all the time which is why both fail to understand India.

Women in ancient India always enjoyed a high position. The developments of today prove that the status of women has diminished tremendously. Do you think this marks the downfall of Indian civilisation? What do you think is the need of the hour to make the society more sensitive towards women?

That women enjoyed high position in ancient India is your assumption. In Vinaya Pitaka, the Buddhist manual for monks, they are seen as evil temptations who take monks away from dhamma. A woman’s desire was a dangerous thing in Jain and Hindu scriptures, to be managed with care. The past is more complex than we imagine. This simplistic assumption that past was good and the present is bad mirrors Abrahamic myth, Fall from Eden (bad past) and a yearning to Return to the Promised Land (good future), via a saviour, is a favourite narrative amongst Left and Right Wing politicians and activists.

Should we see Shiva, Vishnu, Krishna, Ram as gods or should we see them as humans who were elevated to the status of gods?

Depends on how you define gods and humans. Based on your previous question, I sense you have a Western understanding of what gods should be — supernatural beings. In Hindu understanding, gods are states of consciousness. They embody various aspects of wisdom. Its interesting that your list of gods did not include female figures or figures like Ganesha and Hanuman, who are not quite ‘human’ in form.

Other people’s faith is often superstitious. Justice, for example, does not exist in nature. But many believe in it. Is that fact or superstition? Some people believe that gems and prayers will cure ailments. Others believe revolution will cure society. For me, it is the same thing. Faiths can be healing and harmful. We must be cautious of faiths that cause harm. These faiths can appear as gods, demons, or as doctrines like equality that seek to ‘develop’ tribal cultures towards modernity.

Who is a Hindu?

Anyone who seeks answers or solace through Vedas and Puranas.

“This religion is superior to everyone else’s”. “There is only one god and no other god.” These are what Abrahamic religions preach and practise. What is your view of religion in this context?

Everyone believes that. Capitalists believe Capitalism is the greatest doctrine. So do Communists. As do rationalists. It is the nature of myth to discredit other myths.

You have written a book on Hanuman — My Hanuman. That, as you said, was your interpretation of the Lord. An artist in south India created a Hanuman poster which became popular as ‘angry Hanuman’. Many felt that the interpretation was wrong. What is your view on that?

Some politicians claimed that Internet was there at the time of Mahabharata. Isn’t this laughable?

Some people believe that once upon a time there was a world without inequality. Would you find that laughable? Politicians know how to get press coverage. Don’t underestimate their ability to manipulate you.

The fight for rights of entry of women of a particular age in the Sabarimala Temple was won after a hard fight. But as we see today, some women’s groups are challenging the Supreme Court verdict. How do we interpret religion in this light? Should there be political or judicial interference with it? And if Hindu religion prevents women from certain religious rites, ceremonies or places, is it not drawing a parallel with Abrahamic faiths?

The verdict was based on the value of equality and in doing so rejected the value of diversity. The more we try to homogenise society, in the name of justice, the more we destroy heterogeneity. That is the current trend. Destroying cultures because they don’t fit our mould of ideal society. It has a backlash in the form of Right Wing radicalism, that rejects homogeneity and one truth.

You have been criticised for My Gita. Some quarters have alleged that your interpretation is factually incorrect, questions your understanding of Sanskrit. What would you say to them?

I respect their opinion. But it is My Gita. Not theirs.

It has been after a long battle that Section 377 was struck down. Hindu religion has always embraced homosexuality as can be seen in various ancient books and the epics. What do you think went wrong over time?

You use the word ‘battle’ repeatedly. Violence is embedded in civilised speech today. Isn’t it? Section 377 was not struck down, it was read down. Hinduism did not embrace homosexuality — it acknowledged that it exists in nature and the wise are capable of including it. Hinduism never prescribes. It simply describes. In all times, homosexuality exists. In all times, the wise include the different, and the unwise don’t. Hinduism provides the path to be wise, but does not force you to follow it, in this life time. That is why it is called sanatan, timeless wisdom.

What are your views on Ram temple.