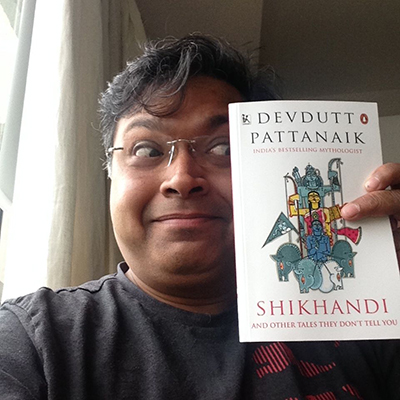 This is a book just waiting for a reaction. Neither outrageous nor dramatic, Devdutt Pattanaik’s Shikhandi: And Other Tales They Never Told just dares take a different route. As Pattanaik himself has written, the stories told in it are “like the hijra’s clap”. He explains: “just as a hijra, ignored by the mainstream, often rejected by her own family, reduced to a joke in popular entertainment, claps in the crowded streets demanding to be seen, the various queer stories embedded in Hindu mythology are waiting to be heard.”

The writer has gleaned stories from various sources such as the Ramayana, Mahabharata, Puranas, Jain and Buddhist texts as well as folklore with the idea of bringing out narratives that have rarely been told publicly. There are some unheard stories of Shikhandi who becomes a man to satisfy his wife, Arjuna who was temporarily castrated for showing restraint – yes, the very same warrior Arjuna of Mahabharata; of a cross dressing Bhima and finally, Rama who included all which meant even the ‘trittiyaprakriti’ (third gender or third sexuality) in his kingdom.

The unenlightened, informs Pattanaik, value the flesh, hence gender over the soul. The enlightened see the flesh in purely functional terms; they venerate both the devadasi, who offered her body to everyone, and the sanyasi, who offered his body to none. Here, Pattanaik speaks of sexuality, the Indian society and the book.

Queerness seems much reviled by the ‘orthodox’ followers of religion…

Speaking of Hinduism, I don’t know who qualifies as ‘orthodox’ follower. To be ‘orthodox’, there has to be a set of core rules. I am yet to find such core rules in Hinduism. The closest I find is affection or bhakti and wisdom or gyan. So technically, the ‘orthodox’ follower should be the most lovable, inclusive person around. But they are not, are they?

These ‘orthodox’ followers of religion – constructed and popularised in part by the media – are really far from the core: they are the radicals, who want to turn Hinduism on its head, make it an oversensitive and intolerant religion full of leaders who get power by being dominating and narrow-minded.

As you have mentioned, people chose to retell stories of mythology by omitting queer references. Was it difficult to find such stories?

Many of these stories are quite familiar to people. I have just retold them such that one pays attention to the underlying comfort with queer elements. You don’t find such queer elements in other major religions, certainly not in Christianity, Islam or Judaism. A God who is comfortable cross-dressing and indulges in it to express his deep love for his devotees – that is only in Hinduism.

And I am still trying to figure what is ‘fact’ in the realm of mythology. There are only stories embedded with subjective truth.

Some stories like Hanuman being the son of Shiva are tales which are literally not told. You have dipped into various sources including the mythologies from the north and south.

There are many, many Puranas. Each Purana has different stories. They are like parallel rivers running which may occasionally intersect with each other. So there are stories that seek to link Ramayana, which is primarily a Vaishanva document, with Shaivism. One of the ways to do that is via Hanuman because he is more monastic and hence closer to the ideal of Shiva. In some tales, Hanuman is Shiva’s avatar. In others, he is the son born when Shiva encounters Mohini. Vaishnavas reject these stories, while Shaivas celebrate them to a degree.

It is really tough to classify these stories as northern or southern, eastern or western. Puranas are vast collections, with different stories becoming popular in different historical periods and geographies. Plus, there are the many oral versions. Very few scholars have dipped into all of them.

Western academicians tend to see this diversity as divisive. Indian scholars see the underlying unity. And the uneducated politician is either surprised or shocked when the details are presented to him. We want simplicity, certainty and convenience in life, neat boxes and fixed rules – Hinduism refuses to indulge this childish need. And the gods chuckle at human exasperation.

Have you been worried about the reactions to your book?

We indulge intolerance too much. I am perfectly fine if someone wants to oppose my book and ban it because it bothers his or her notion of how Indian narrative history should be. Banning the book does not destroy the idea. Vedic wisdom has never relied on books for its survival, anyway. The stories gave me great joy and wisdom and I feel everyone should have access to this joy and wisdom.

How important is it for the youth to know mythology? And how should they approach it?

Lessons come from parables, not mythology. Hitopadesha and Panchatantra are parables. This is a common confusion. Not surprising since no one actually studies the theory underlying mythology and sacredness, certainly not in India. We don’t even have a department of mythology – mercifully, now there is a course in Mumbai University, Sanskrit Department.

Mythology is about frameworks that shape our thinking. These frameworks are created by stories, symbols and rituals. Biblical mythologies, for example, create the framework of one God, one life, Heaven and Hell. Rational atheism creates the framework where science has all the answers and there is no such thing as life after death or God. Nationalistic mythologies create frameworks for patriotism, an idea that emerged barely 300 years ago. Hindu mythology creates the framework of rebirth and karma. You cannot escape myth, even if you try. It is the subjective truth bubble we live in.