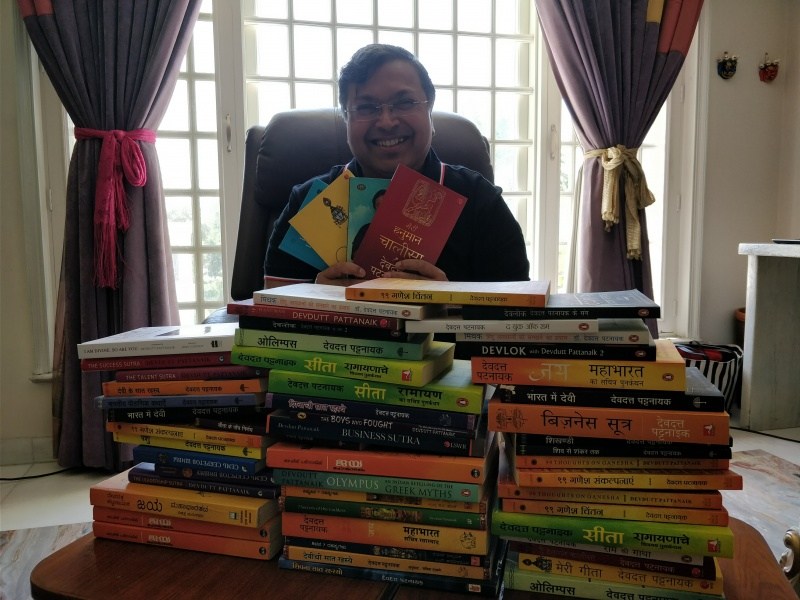 Published on 21st April, 2018, on www.sundayguardianlive.com

In this interview with Latha Srinivasan, author Devdutt Pattanaik talks about the central role mythologies play in shaping societies, and how liberal values can be derived from tradition.

Devdutt Pattanaik is more than an author who writes on mythology–he is someone who has skilfully shown us how mythology has an impact on modern-day society, governance and management. But he is also a stellar storyteller who has shown us how myths and folktales are timeless and connect with our values and belief systems.

Q. Over 40 books and counting. What keeps you motivated as a writer?

A. That this is just a drop in the ocean called mythology that few have explored. I have currently just covered Hindu mythology. And Greek mythology. There is Buddhist, Jain, Abrahmic and world mythology that awaits coverage. Also, writing for different audiences excites me: if Jaya is for adults, then I needed to write Boys who Fought for children. If Business Sutra is for management students, then Shikhandi And Other Queer Tales They Don’t Tell You is for the LGBT community.

Q. How important is Indian mythology? And how much relevance does it have today?

A. All mythologies are relevant as they are timeless and help us appreciate the human condition. Lazy minds often confuse mythology with history. Mythology reveals how people make sense of their world and transmit their worldview to their children using stories, symbols and rituals. It is all about faith and belief and assumptions, which applies to all communities, past and present.

Q. There seems to be a conscious drive from your end to educate Indians on mythology.

A. The world, actually. But let us begin with Indians as we are most receptive to the power of mythology and do not confuse, like the West, mythology for history. The West refuses to admit that its worldview is shaped by Greek and Christian myth. The Chinese refuse to admit that their worldview is shaped by Taoist and Confucian myth. We are comfortable admitting that the Vedas and Puranas shape our worldview. People need to understand they live in epistemological paradigms (that’s academic jargon for worldview) and we reveal this through stories we tell and rituals we follow and symbols we create.

Q. You have stated that the right wing pretends the LGBTQ community doesn’t exist, though Hindu mythology incorporates them. Why do you think homophobia continues to exist in the 21st century?

A. Homophobia or violent exclusion of queer people is a tribal behaviour. Tribes love homogeneity. The different is either rejected or accepted as a shaman who connects the tribe with the other world. So in many tribal cultures, the shaman was queer. Our world which drifted towards globalisation is now swinging in the opposite direction of tribalism. We are finding valour in rejecting contamination. Discourses that celebrated diversity are being replaced by discourses that celebrate purity. Hence the rejection of LGBTQ community in many right-wing groups. We must not forget that the earliest rejection of queer people (Pandaka in Pali), denying them ordination, is found in Buddhist rules for monks (Vinaya Pitaka) composed nearly 2,000 years ago. Our desire for purity and our assumption that heterosexuality is natural (it is not as any study of animal and plant kingdom will reveal) results in a moral rejection of queer behaviour.

Q. You have beautifully connected myth and management. What are the top five business sutras according to you?

A. 1) Where there is hunger there is the market.

2) All products and services seek to give humans satisfaction and significance.

4) It is the powerless, not the powerful, who crave for power.

5) Critical thinking without critical empathy is a dangerous thing.

Q. Do you think every organisation should have a Chief Belief Officer?

A. I don’t think every organisation should have a Chief Belief Officer. Where did you get that information from? My role at Future Group had no KPI or KRA. We created this designation to create a buzz in the corporate world so that people question their worldview and appreciate that frameworks that work in Europe and America and China need not work in India because Indians look at work and life differently. In fact, there is no one India–there are multiple Indias, each with its own worldview. Our inability to respect these various worldviews is creating a great crisis, not just economic and political but also psychological.

Q. How important are women in mythology? How much do we celebrate them?

A. Women are 50% of humanity. Naturally, they are integral to mythology. But most written myths we have are composed by men for men. We must remind ourselves of that and seek out oral narratives of women, their own rituals and symbols that reveal a different side of humanity. We don’t need to “celebrate” women. We need to simply acknowledge them and their role. To “celebrate” them is to fetishise them.

Q. Given that so many diverse belief systems exist, is there anything that unifies them?

A. All belief systems reveal human ambition and anxiety, a fear of the other, yet a yearning to be respected by the other. Even the most rational of human beings who imagines he does not live in myth seeks certainty, rhythm and order. Yet, nature need not follow human rhythm and order. In fact, human culture is all about destroying natural order and imposing a human order on it.

Q. Can the secular and the religious co-exist in India peacefully?

A. Secularism is just mythology without God or gods. It is a mythology that seeks to harmonise different belief systems or a mythology that seeks to create a “rational” belief system independent of religious belief systems, through consensus. Like all myths, it assumes it is logical and fair. If monotheism respects only one god, modern secularism respects no god. Ancient Indian secularism meant respecting all gods and so the ancient kings of India always respected people of every faith and contributed to the well-being of Buddhists and Jains and Brahmins, and contributed to all local deities. This is secularism through plurality. Incidentally, modern secularism was created by Protestant Christians who “protested” against the Catholic Church’s control of the state.

Q. Trolls have become increasingly vocal on social media. How do you deal with them?

A. I mute them on Twitter and Facebook. It reveals the rage of people who feel unsuccessful, helpless and invalid. Politicians cleverly exploit them.

Q. What would you say to your critics?

A. Nothing. Everyone is entitled to their views. All views are based on limited knowledge ultimately.