Olympus: An Indian Retelling of the Greek Myths 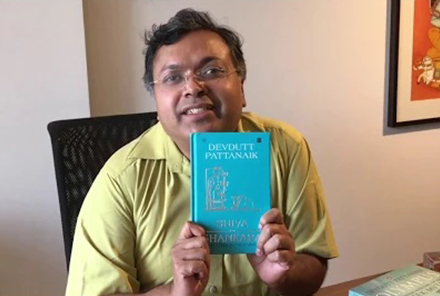 Olympus is the home of the Greek gods, much like Amravati of the Hindu devas.

The feats of the Greek hero Heracles, known to Romans as Hercules, reminded many of Krishna, as did his name, ‘Hari-kula-esha’ or lord of the Hari clan.

The Greek epic of a husband sailing across the sea with a thousand ships to bring his wife, Helen, back from Troy seems strikingly similar to the story of Ram rescuing Sita from Lanka.

Is there a connection between Greek and Hindu mythology then? Does it have something to do with a common Indo-European root? Or maybe an exchange of ideas in the centuries that followed the arrival of Alexander the Great, when Greek emissaries travelled to the kingdoms of Mathura and Magadha?

In this book, mythologist Devdutt Pattanaik turns his attention to ancient Greek tales and explores a new world of stories. Long have Europeans and Americans retold Indic mythologies. It is time for Indians to reverse the gaze.

“ Greek Mythology - When you extend the linear thought you realise the line is just a subset of a circle
Indian Mythology - And it is the circle who has to discover that the people only experience it as a line.
These are the two great mythologies of the world. ”

“ Always been a admirer of ancient Greek be it scholars or their gods..was searching for a book by Indian writer on Greeks..this book quenched my thirst . Thank you Mr Devdutt !! ”