Man Who Was A Woman: And Other Queer Tales from Hindu Lore 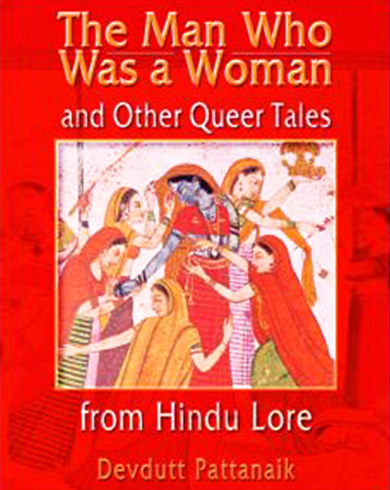 The Hindu worldview considers every behavior and identity a possibility in this endless boundless cyclical universe. Hindu society, however, with its foundations in patriarchy and heterosexuality, deems non-conventional gender identities and sexual behaviors inappropriate for social stability. They are tolerated only in fringes, especially if they express themselves through patriarchal and heterosexual vocabulary.

This conflict between Nature and culture, and the resulting repression of choices that threaten the dominant discourse, is manifest in the queer plots and queer characters of Hindu lore. Queer tales, though subversive from one point of view, are conformist from another because they endorse traditional gender roles and sexual symbolism. In narratives where men become women and women become men, feminine imagery continues to represent material reality while male biology provides the wherewithal for spiritual prowess. Thus, throbbing beyond sexual politics, time-honored metaphysical metaphors and allegories retain their mythic power.

Hindu lore also drives home the point that social law changes with time to meet the demands of a particular age. What is dharma in the age of Rama need not be dharma in the age of Krishna. The world changes with time and with it human behavior and social law. Modern Indian law is often at odds with the Hindu belief, ritual, art and narratives, making no room for alternate sexual behaviors and gender identities, despite their existence in traditional constructs, probably because it borrows heavily from British colonial law that was largely formulated within the Judeo-Christian scheme of things. The presumption that what is 'unnatural' in the Biblical paradigm must be 'unnatural' within the Hindu paradigm disregards the fact that Hindu lore projects everything as part of Nature and of divinity, governed by the law of karma. Some things may be socially inappropriate. But nothing is unnatural. In fact, everything is a manifestation of the divine.