You still eat with your hands 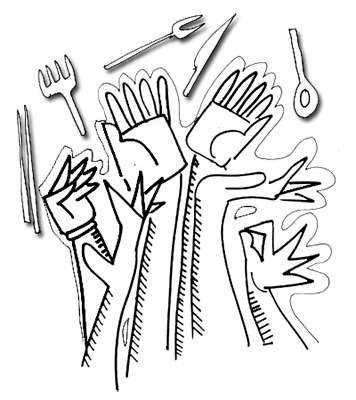 “You STILL eat with your hands.” This is a comment (allegedly) made by Oprah Winfrey in her show on India, suggesting as if eating with hands is something primitive and undesirable. Such cultural insensitivity from a TV hostess renowned for her empathy! Why this disgust about eating with hands?

Long before cutlery became fashionable in Europe, chopsticks were used in China. The oldest ones, made of bronze, have been dated to 1000 BC. In the Orient, it is considered uncivilized to serve a guest food that has to be cut or torn with a knife or speared by a fork.

In Europe, during the Middle Ages, food was eaten on hardened stale bread called trenchers. Knives were used not because they were necessary but because it was impressive. Men impressed ladies by cutting slices of meat, spearing it and offering it to them. In the 16th century Catherine de Medici took the first fork (or the two-pronged ‘split spoon’ as it was called) from Italy to France as part of her dowry. Everybody laughed but eventually everyone mimicked her, as eating with it became a sign of snobbery and aristocracy.

It is interesting that the rise of use of cutlery can be mapped to rise of European imperialism, American colonization and African slavery. Eating by hand came to be associated with natives, laborers and servants.

But think about it, at formal dinners the Indian Army and the Indian Government expects all its officers and diplomats to use cutlery. That is proper.  The option of eating with the hand does not exist. A colonial hangover? So why chastise Oprah?

One can understand that in cold countries the hands would be covered with gloves and so eating using an instrument would have made immense sense. This need led to the innovation of the fork in Europe and the chopstick in China. But in warm countries like South Asia and Middle East, eating by hand always made immense sense.

One can argue that hands are dirty and even unhygienic. But that argument does not hold if there is water and soap and towels available to wash and wipe hands. In many parts of North India, while roti is eaten by hand, people prefer using the spoon while eating rice. This must have something to with having grains sticking on the fingers, which is much more while eating rice and much less while eating bread.

In Vedic texts, food is a goddess and fingers are the midget sages known as Valakhilyas. The sages carry the goddess to our mouths so that we sustain ourselves. In Jyotisha, the five fingers are associated with the five elements: earth (little finger), water (ring finger), air (middle finger), ether (index finger) and fire (thumb). Thus when we eat by hand, the five elements get symbolically connected with the food. But such symbolism and speculations do not matter as one gets more modern and civilized, I guess.