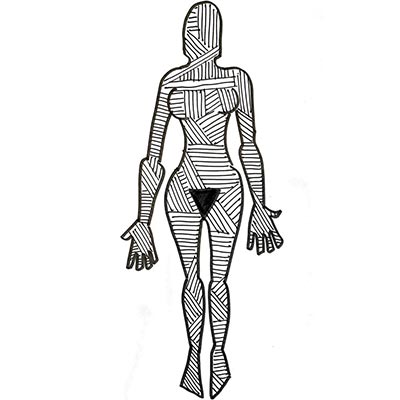 The temple at Kamakhya, Assam, was built in the 17th century by the kings of Cooch Bihar. But the deity within is an ancient one, a Tantrik goddess predating Vedic culture some say, or even older, a goddess of the local Khasi and Garo tribes. But long before it was identified as a particular Goddess, it was simply a natural rock formation, a cleft in a sheet of stone, resembling – at least to human eyes – a yoni, or the vulva, the entrance to the female genitalia, on the shallow bed of a mountain’s stream.

Every year, following the first rains, it is said that red fluid gushes out from the cleft: underground soil according to rationalists, vermillion powder sprinkled by local priests say cynics, menstrual blood of the earth, hence the Goddess, say the believers. For three days, therefore, as part of Ambubachi festival, the temple doors are shut, to let the Goddess rest and regain her fertility.

When I entered the shrine at Kamakhya, years ago, I felt as if I was entering the womb of the earth. The steps go down to a subterranean chamber where a spring flows and there you see three crowns, representing three forms of the Goddess: Lakshmi, Saraswati and Kamakhya, with the third one being the centre of all attention, covered with red cloth and flowers. Beneath the crown, I was told, is the cleft.

Legend has it that when Shiva’s consort Sati killed herself following a dispute with her father, Shiva was inconsolable in his grief. He clung to her corpse and wandered the earth until Vishnu cut the body into many pieces, forcing Shiva to let go. The places on earth where the various body parts fell became Shakti peethas, or the seats of the Goddess. The number of these shrines varies depending on the scripture one refers to or the tradition one is familiar with. But one thing is clear: the womb fell at Kamakhya.

Today, any discussion of genitalia, especially female genitalia, in public evokes shame, embarrassment, or disgust, a result of our social conditioning that frowns on all things associated with reproductive anatomy. Yet, in Hindu tradition, the divine is often represented using reproductive organs. Some Western scholars may find this titillating and some Hindu fundamentalists may find this insulting, but until recent times, India had a very healthy approach towards sexuality and fertility. In fact, Hinduism emerged from the Vedic substratum as a countermove to the asexuality and sterility evoked by monastic traditions such as Buddhism and Jainism. This tension between the world of the hermit and the householder was communicated using various sexual and non-sexual imagery. The former was classified as Tantrik, the latter Vedantik. Nonsexual imagery communicated the same idea as sexual ones. Instead of womb and phallus, they used plants, animals, geometry, artefacts and human iconography, each one a metaphor.

Belief that the earth is the Goddess and like all fertile women she too has periods is a common theme in agricultural communities. In Odisha, there is the famous Rojo festival, during which women are asked to rest, and not step on the earth, as she is also resting. This is a time for playing games all day on the bed, or enjoying the swing, while celebrating womanhood. In this festival, women are not seen as ‘dirty’. Their body, capable of bearing new life, indicated by the monthly flow of blood, is celebrated.

Fear of menstruation, and the female body, the shunning of fertility and sexuality, can be traced to the monastic orders. Buddhism tells us how Buddha outsmarted the daughters of Mara to find freedom from suffering. In Hinduism, Mara becomes Kama, and his daughters become his army of damsels known as apsaras, who distract sages from meditation. Shiva even sets aflame Kama with his third eye.

In South India, Kamakhya is called Kamakshi and she is visualised with the symbols of Kama: sugarcane, flowers, and parrot. In Assam, she is visualised very differently as a six-headed, twelve-armed goddess seated on a lotus that rises from the navel of Shiva who rests on the back of a lion. This image reminds one of the more popular Vaishnava image of Brahma seated on the lotus rising from the navel of a Vishnu sleeping on the coils of a serpent. While in Vaishnava traditions, Brahma is visualised as frightened after his birth, Kamakhya of the Shakta traditions is visualised as all powerful, even placing her foot on Shiva’s chest.

Kamakhya is sometimes identified as Kamala (she who sits on the lotus) or as Sodasi (she who is sixteen years old) and is sometimes seen as a part of the Mahavidya collective. Images of the 10 Mahavidyas are found in the temple complex of Kamakhya, but these are clearly later Tantrik traditions. Here, is one of the few Chinnamastika temples, where the Goddess is seen as decapitating herself and drinking her own blood while seated on a copulating couple. This image of violence and sex is a direct challenge to the non-violence and asexuality that is glamorised by monastic orders.

Kamakhya is sometimes identified as Bhu-devi, the earth-goddess who is the wife of Vishnu. This is seen as an attempt of Vishnu-worshippers to claim the Goddess who is popularly linked to Shiva. The story goes that when Vishnu rescued Bhu-devi in the form of Varaha, she gave birth to a demon-child called Naraka, who was killed by Krishna. Krishna-bhakti with its vegetarian customs was introduced to Assam by the famous saint Shankaradeva. But in his school of bhakti, unlike the Chaitanya Vaishnavism in Bengal, there is no mention of Radha, perhaps to keep out the influence of the Goddess and her celebration of fertility and sexuality. Thus, we see a tension between sexuality and asexuality, householder and hermit, Tantra and Vedanta, centuries ago, resonating the tension in contemporary times. So it has been. So it will always be.

This article is also listed under Indian Mythology, Pilgrim Nation