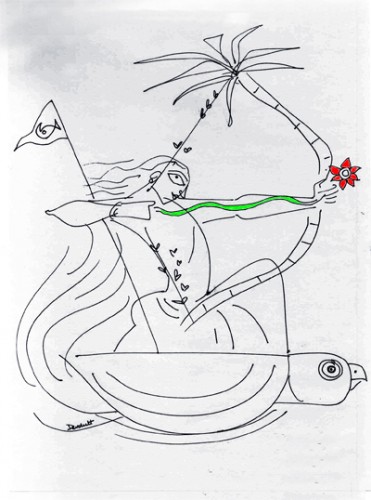 This was the agenda: to get Shiva married. It was important for unless this happened the world would be destroyed. How does one get an ascetic like Shiva to change his mind?

This question is no different from asking – How do we get a consumer to buy our product or how do we get our employee to stick to our company? Every customer – external or internal – is actually Shiva, with the power to destroy us through indifference. How do we get them to open their eyes? Not the third eye of detachment, but the two eyes of interest.

The most common approach is the Kama approach. Kama is the love-god who shoots arrows that will spawn desire in the heart of hermits. Kama seduces Rishis like Vishwamitra with Apsaras like Menaka This approach means stirring the most primal instincts of man – hunger, greed, lust.

Chang, the new marketing head of a global pharma company, saw the popularity of the Kama approach amongst most of the new hopefuls he was interviewing for the position of brand manager. When asked how to increase market share, the reply was invariably, `By lowering the price.’ When asked how to motivate the sales force, the most common response was, `By giving them better incentives.’ In other words, most of those being interviewed were applying their levers to the wallet. They did not, or could not, think beyond transaction.

The Kama approach works when one visualizes the customer as a Rishi who aspires to be a Deva, constantly craving for the next best deal. Shoot one arrow, get one Apsara to do her dance, offer instant gratification, lower prices, hike incentives and boom – you have success. Instant consumer conversion! Instant employee satisfaction!

But for how long? Sooner or later there will be another Aspara in the market – a competitor offering a lower price or a higher pay packet. The Rishi who was seduced by one can easily be seduced by another. Lust can never create loyalty.

In the Kamakshi approach, we visualize the target not as Deva, a common god, but as Maha-deva, God, spelt in capital. This God, refused to fall for Kama’s cheap tactics; he opened his third eye and reduced Kama to ashes. But he did marry. Not a nymph, but Kamakshi, she who contains Kama in her glance.

Kamakshi is the name given to Parvati, princess of the mountains, in South India. In the East, the name given to her is Kamakhya. She holds all the symbols of Kama – the parrot, the sugarcane, the lotus flower – but  while there are no temples dedicated to the love-god, Kamakshi is worshipped as the Goddess.

Kamakshi’s approach was radically different from Kama’s. She appealed not to the base instinct of Shiva but to his higher instincts: his head and his heart. Conventional thinking says the world thrives when there is discontentment, that desire fuels market growth. But Kamakshi thought differently.

Kamakshi knew that Shiva was beyond lust. No dance would arouse him. Was there anything else beside self-gratification that would make him open his eyes? The more she thought about Shiva, the more she realized that beneath the indifference there lurked infinite compassion.  She decided to tap into it.

She wanted Shiva not to reject human imperfection but to be tolerant of it. She demonstrated her intention by subjecting herself to great penance, standing on one foot and meditating, fasting, not sleeping, immersing herself for days in cold river water, and exposing herself to the elements. Eventually, sensing her integrity, shaken by her determination, Shiva came to her and agreed to do whatever she asked of him. `Be my husband,’ she said. Shiva could not say no. Kamakshi wanted him to marry not for her pleasure, nor for his either, but to save the world from destruction.Kamakshi thus got Shiva to open his eyes not in lust, but in love.

While Kama thinks of Shiva as a prey to be struck down by an arrow, Kamakshi approaches Shiva with awe and reverence. While Kama believes in instant gratification, Kamakshi things of lifelong loyalty. In the Kama approach, the focus is on lust (price / incentive) rather than the bride (product / organization) or the groom (consumer / employee). In the Kamakshi approach, focus is firmly on the bride and the groom. What does the bride actually offer? Why? What does the groom seek? Why? Can there be a true wedlock, or will it be just a casual affair? This means, less discussions on trimming the cost and more discussions on consumer insights and employee feedback. This means effort, proactive activities not reactive promotions. This means actually looking at the soul of Shiva, not just his senses.

The brand manager that Chang finally selected did follow the Kamakshi approach. When asked how he would increase market share, he said, `By making sure that our product meets the unmet need of the consumer, or by making the consumer aware of a hitherto unknown need that the product can satisfy. Our products should be able to bridge a gap in their psyche.’ And when asked how he would motivate his sales force, he said, `By appealing to their desire to be brilliant. To stoke in them the desire to conquer an impossible market.’ This manager would surely work to open the eyes of Shiva.

Cynics will argue – it all comes down to money. The only reason they say that is because money is tangible and measurable, easy to understand and be turned into a graph. Passion is not. Loyalty is not. How does one capture the soul of a market on a spreadsheet? It can only be sensed. It will always remain abstract. And so, we fall into the Kama-trap, reduce Maha-Deva into Deva, and trust the wallet, rather than have faith in the head and heart, like Kamakshi.

Yes, everyone wants a good deal. But deep down, more than a good deal, we really  want to feel good about ourselves. We don’t want to be seduced by discounts and incentives. We want our purchases and our employment to bring forth our glory.