Wives of the Gods 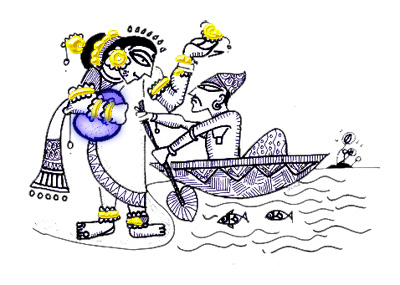 This is a popular Goan folk song where the female singer says, “Ghe ghe ghe, saiba,” (Take, take, take, lord) and the male singer keeps saying, “Maka naka go,” (I don’t want it). And it is a rather sensuous song — something that was exploited by Raj Kapur in Bobby when it transformed into a rather mischievous number which says “Pyar mein sauda nahin,” (There can be no bargain in love). Dusk, the systematic removal of jewels by a beautiful woman, a man saying no! Yes, it can be romantic and sensual and bawdy. But as Wendell Rodricks, the renowned designer based in Goa, pointed out to me, when we met at the Siyahi textile conference, Mantles of Myth, in Jaipur recently, the song has a secret that is cleverly implied. It retains a folk memory that could never be spoken of in public for fear of persecution by Portuguese authorities who frowned upon local Hindu traditions.

The dumb boatman is not realizing that the woman before him is a Devadasi — who else would dare walk alone at night to go to a wedding and wear so much gold? Who is her beloved getting married at night? Is it Shiva? Is the wedding an allusion to Maha-shivratri, the night on which Shiva gets married? Who does she address as ‘Lord,’ — the boatman or her divine beloved getting married to someone else across the river? Could she be referring to a sacred image of Shiva she is secretly carrying under her clothes and taking across the river to rescue it from Portuguese Inquisitors, or perhaps the Bahamani Sultans? If caught, she could be beaten and killed and the sacred image desecrated? Could this be a poetic memory of how the Shiva-linga of the Sapthakoteshwar Temple ended up from Divar Island to Narvem? We will never be sure. It is the suggestions that make the song so delightful.

It is known that the Konkan coast, including Goa, like many other parts of India, had a long history of the Devadasi tradition. Women were attached to temples to serve as dancers and singers and brides of the deity. And being married to the deity, they could never become widows. And since God is present in every man, they could serve any man. Thus, they were public women, courtesans, entertainers, pleasure providers. They had access to great wealth. Folklore from Goa tells tales of Devadasi gold hidden under ground, protected by serpents. At one time, they were considered to be auspicious, an integral part of wedding ceremonies. To see her face in the morning was said to bring good luck. She was invited to tie the wedding thread around the bride during marriage ceremonies, because they carried with them the grace of the divine, being bound to no one but God.

All this changed with the arrival of traders and missionaries from England and Portugal and France who came in search of spices and souls.  Devadasis were condemned as loose woman, as whores, and they faced vicious attacks, driven out of villages and temples and deprived of their livelihood. Some were killed, some found husbands, some found livelihood as cooks and servants, and some had no choice but to turn to prostitution, stripped of all dignity that was provided within the temple precinct.

Ancient scriptures like Kamasutra refer to Ganikas or public women, sometimes called Nagar-Vadhu or brides of the community. These women were said to be so beautiful that they could not be given to a single man and hence were made available to the public, to avoid issues. In exchange, they were given houses and gardens and wealth and honor. They were said to have provided men pleasure by becoming experts in 64 arts which included music and dance and cooking and witty conversation. Buddhist texts dated to 300 BC refer to wealthy courtesans like Amrapali and Upagupta.

These public women became Devadasis from around 500 AD as India became more theistic and temple focused following the rise of the Bhakti movement. They lived in and around the temple and became part of religious ceremonies. Grand temple complexes like the one at Tanjore, Tamil Nadu, and at Puri, Orissa, were renowned as much as for the deity as the temple dancers.

When Muslim warlords overran the Gangetic plains, from around 1100 AD, much of ancient Indian classical arts survived only because of Devadasis protected within temple citadels in the East, West and South. There are 19th century photos of these women showing them as graceful, fashionable ladies laden with gold. In the North, as in Lucknow, the Ganikas and Devadasis became Tawaifs, bastions of India’s sensory culture, but unlike Devadasis, they did not have the sanction of religion.

The notion of Devadasi, however, must never be over romanticized. It was also a cultural system that allowed for the exploitation and abuse of women. Victorian prudery and secular Indian morality will always frown upon it, but it remains part of our heritage. Just as all study of Bollywood films will be incomplete without its Item numbers, no study of Indian history and culture will be complete without paying due attention to the contribution of the silent and forgotten Devadasi.