Without Either there is Neither 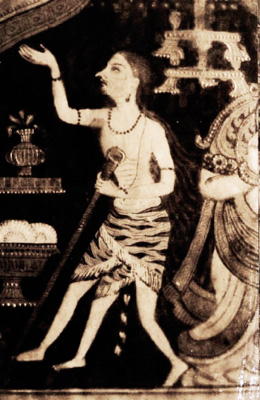 In South Indian temple walls one often finds a character called Bhringi looking adoringly at Shiva dancing. What distinguishes Bhringi from the rest of the followers of Shiva is that he looks emaciated, just a skeleton in fact. And he has three legs, not two.

The story goes that Bhringi was a devotee of Shiva. One day, he came to Mount Kailas, the abode of Shiva, and expressed his desire to go around Shiva. As he was going around, Shiva’s consort, Shakti, said, “You cannot just go around him. You have to go around me too. We are two halves of the same truth.”

Amused by this, Shiva made Shakti one half of his body – the famous Ardhanareshwar form of Shiva. This was God whose one half is the Goddess. But Bhringi was adamant. He would go around Shiva alone. So he took the form of a rat, some say a bee, and tried to gnaw his way between the two.

Bhringi realized his folly. Shiva and Shakti make up the whole. They are not independent entities. One cannot exist without the other. Without either there is neither.  He apologized.

So the world never forgets this lesson. Bhringi was denied flesh and blood forever. To enable him to stand upright he was given a third leg, so that his legs served as a tripod.

The idea of mutual inter-dependence is a consistent theme in Hindu mythology. There is no one; one is a sum-total of two. The same principle applies in the business world. It is a lesson that Ranbir was taught by his father who ran the magazine business for 30 years before retiring.

Unfortunately, the reality in most business houses is that the two complementary arms often become competitive. Each arm wants to prove it is more critical than the other. As a result there are silos and inter-departmental warfare. The harmony represented by Ardha-nareshwara was being lost. Arguments were about whether Shiva mattered or Shakti. More critically, who is Shiva and who is Shakti.

The Rishis represented the two halves of the universe, male and female form to indicate mutual inter-dependence. But society engineered gender politics. Same is true for business houses. Anyone who has a bird’s eye view of the business knows the criticality of each and every arm. But those down below have an obsession of valuing one arm over the other, like Bhringi, creating imbalance to the peril of the organization.