Wisdom of Seeds, Before Sanskrit 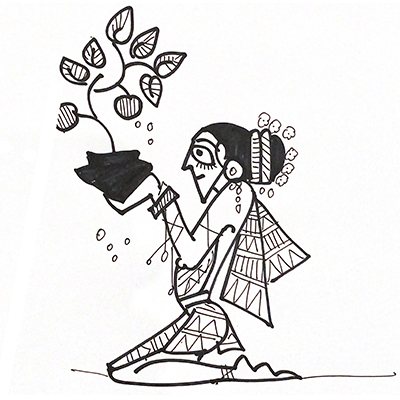 In Indian mythology, two metaphors are used to explain the origin of things and the cause of things. These are womb (yoni, in Sanskrit), and seed (bija). Related to bija is the concept of fruit, or phala. From the yoni comes the phala that contains the bija, which when placed in the yoni once again creates new phala.

These are metaphors: known ideas used to explain unknown concepts. The yoni metaphor comes from herding communities, which secured food from the animal kingdom. The bija and phala metaphors come from foraging communities, which secured food from the plant kingdom. Though widely used in “Sanskirt” literature, these ideas are pre-Sanskrit, even pre-language. Long before we used sound to communicate, we used gestures (mudra) and symbols (pataka, pratika) to communicate ideas. These pre-verbal forms of communication are still found in dance. We must remember the story of how Shiva educates Vedic priests about the secret of atma using dance, captured in the famous Nataraja statue.

The Hindu concept of karma is explained using the concept of bija and phala. From bija comes phala, from phala comes bija. What came first, the fruit or the seed? Those born of yoni, we are told, are creatures that experience death. Thus yoni or womb ushers us into the realm of mortality. When we die, in many tribal cultures, the dead were buried inside pots. The pot represented the womb, the origin. In Sanskrit, the pot is called garbha, the womb. In Hindu temples, the innermost sacred shrine where the deity is enshrined is called garbha-griha, the womb house. Here the image is “conceived” through rituals known as prana-pratishtha, the placement of the breath.

The womb is called a field or kshetra in which the seed is placed. Earth is the primal worb or yoni. Thus the animal metaphor is merged with the plant metaphor. Bija now refers not just to seed but also semen. Phala refers to the body, deha, in which resides the seed. The seed is the source of life and breath that manifests only when the seed germinates in the soil-yoni. This idea is presented through rituals involving germinating seeds and pots, common in Hindu wedding, childbirth and funeral rites.

None of these ideas depend on Sanskrit for their origin. They are ideas found in tribal communities, hunter-gatherer communities, around the world, who do not speak Sanskrit. So these pre-Sanskrit ideas are communicated much later via Sanskrit. Sanskrit is just a vessel. Just like Sanskrit-speaking Brahmins were transmitters of these ideas, not the source. We can say the language Sanskrit and the Sanskrit-speaking Brahmins are the yoni through which the fruit of prehistoric ideas and the seed of pre-historic meanings reach us.

In academic circles, some argue the tribes formulated these ideas before organised religion and language. But which tribe? Santhal, Bhil, Gond, Munda, Khasi, Garo? Even tribal communities use language, words, grammar, metaphor. We must imagine the world before spoken language–the world of gestures and symbols, art, and rituals, painted on cave walls, buried in pits, scratched on pots. This is where some of the great wisdom of India came from. Language simply helped organise it and transmit it better to a larger audience. Organised knowledge is called shastra.