Why Some Gods Dance and Some Don’t 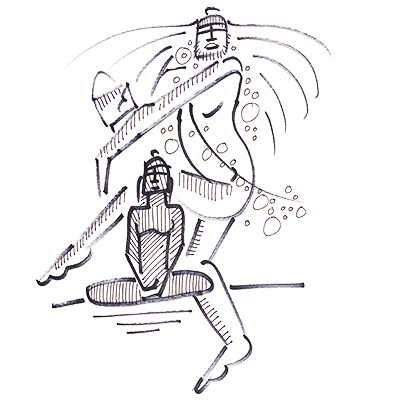 One of the things we take for granted in Hinduism is dancing. Hindu gods dance. Shiva dances his Tandava as Nataraja surrounded by ganas and yoginis. Vishnu dances in the form of Krishna as Natwara on the hood of a serpent, or in the Ras Leela surrounded by women. Ganesha dances. The goddess Kali competes with Shiva in dance. In the crematorium, Chamunda is seen dancing with ghosts and vampires.

Not only do the gods dance, dance is an offering made to the gods. In Puranic literature, Indra enjoys the dance of the apsaras in heaven. We often hear of dance competitions between apsaras. In temples, the devdasis and the temple women were encouraged to dance before the gods. Even today in Bangkok, where much of Indian traditions were transmitted about 1,000 years ago, through sea merchants, we find temples where you pay money to get dancers to perform for the deity. In Chidambaram temple, girls even today make an offering of their graduation dance to the deity.

Across the world, tribal communities are known to celebrate dance in social as well as religious contexts. There is communal dancing in circles in a choreographed format. It is meant to create a collective bond amongst the people, ensure alignment with tribal values, and inclusion of all people. Dance is integral to festivals and rites of passage. People dance during weddings. People dance in processions of gods. Dance is even seen as a mystical rite to commune with the divine as in the controlled repetitive hypnotic dance of whirling dervishes.

However, dancing practices are frowned upon by many religious organisations. These see religion as a solemn entity associated with silence and piety. Dance is seen as lacking the dignity and sombreness that must be part of religious practices.

In Christian traditions, dancing was associated with idolatry. King David is reprimanded for dancing in front of the Ark of the Covenant, in the Old Testament. There are suggestions in the New Testament that Christ approved of dancing but these are seen as metaphors. One doesn’t imagine Jesus Christ as a dancer, the way we imagine Krishna or Shiva or Ganesha as dancers. Dance was seen as an activity of slaves and barbarians, lacking the dignity demanded in the presence of the divine.

In Islam, dance is haram. One does find dancing practices in the Arab tribal communities, but only amongst men in male spaces and women in female spaces. But these are continuations of preIslamic tribal bonding rituals. The idea of women dancing to express themselves, or to entertain, is seen as sensual, carnal, sinful and linked to licentious harems of kings.

In monastic traditions, dance is seen as an extremely sensual activity that celebrates the body. Buddhism and Jainism shun the body and sensuality. The religions see the body as temptations. They shun dance. Buddha and the Tirthankaras are visualised seated or standing in stiff vertical positions. There is no movement, much less any sign of dance or rhythm. Stories celebrate the idea of dancing women giving up their dancing ways and becoming nuns, and finding peace in stillness and solitude.

Dancing was an integral part of Hindu temples, but the idea of dance is missing in Buddhist Chaityas. Though the Vedas refer to dancing gods, dancing does not seem to be a central theme.Dancing as central to worship emerged much later, as Hinduism emerged by mixing tribal and local traditions with the otherwise solemn rites of the Vedas, which did inspire some aspects of dance such as mudra (hand gestures). Dance was seen as a tool through which complex ideas could be communicated. In fact, in the Puranas, Brahmins were told that they have forgotten the meaning of the Vedas. So, Shiva communicates this through dance. This makes dance a divine medium through which ideas can be communicated. It is not just entertainment, but a kind of language.

Dance as language, therefore, is key to Hinduism and part of the Hindu temple dance traditions. It is different from the dances of courtesans who entertain the gods. This appreciation of dance is missing in global culture. We often talk about why Buddhism eventually died out in India. One of the reasons could be that solemn, still monk did not connect with the common folk. People here enjoy dancing and singing. They enjoyed their gods dancing and singing with them, like Krishna, Murugan and Shiva. Even today the dancing and singing during Ganesh Utsav and Navaratri, seems strange to Western tourists who have never seen such wild dancing in mosques or churches. At best, allowances are made for music like Gospel Music, Gregorian Chants and Sufi Music. But dance remains something the orthodox clergy of monotheistic faiths continue to fear. The Friday night party continues to be seen as pagan and Satanic.

Dance is not central to pilgrimage at Hajj or Vatican City. Even Sikh dancing is restricted to secular events, and is not part of religious ceremony. But dance is very much a part of festivals as in Rath Yatra of Puri where Jagannath emerges from his temple dancing and swaying as he moves towards his chariots. Pilgrims in Maharashtra who go towards Pandharpur temple each year dance for Vitthal, who is imagined as their cowherd friend. Even images of gods placed on swings and palanquins keep moving rhythmically to the delight of the crowds. You don’t expect people, or God, or prophets, to dance in Christian, Muslim, Sikh, Buddhist or Jain festivals. But everyone will always dance in Hindu festivals.