Why Scholars Don’t Agree About the Origins of the Shivlinga 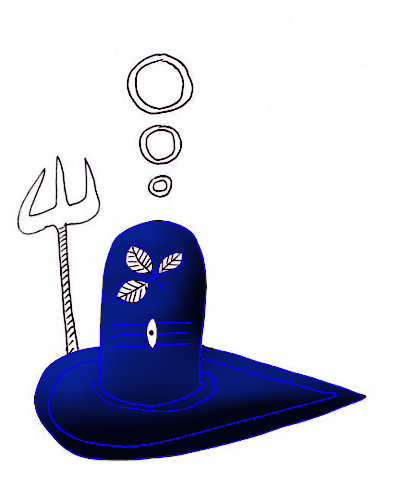 Orientalist academicians love describing the Shiva-ling as a ‘phallic symbol’ because it irritates the Hindu who prefer to see the object of their devotion as something spiritual, not sexual. For the Orientalist, i.e. Western and Westernised scholar, such descriptions are, at one level, a way of thumbing the nose at the religious establishment that views sex as sin. At another level, such descriptions are to reinforce Hinduism pagan polytheistic nature.

In colonial times, Hindu reformers were embarrassed by this Orientalist description of the Hindu god. But they were caught in a conundrum between the abstract explanations of Shiv-ling found in the Agamas that co-existed with the very erotic stories of Shiva found in the Puranas. Basically, one could cherry-pick whatever one wanted to explain what the Shiv-ling actually is. Currently, for politicians and their massive troll armies, it is proof that Hinduism was the ‘timeless faith of Indians’ before the Mughals arrived. No one can argue with the horde. But for those who care for sensible information, we must understand that the Shiv-ling has multiple origins and explanations.

Take for example, South India, three thousand years ago. This was the Iron Age, before the rise of Buddhism, Jainism or Puranic Hinduism. In the upper Gangetic plains, the Vedic hymns were being compiled and classified, attached to rituals. Meanwhile, in the Deccan and far south, tribal communities were forging iron, and burying their dead in pots, and raising stone monuments in their memory. We call this dolmen. Thousands of dolmens are found across Karnataka, Kerala, Tamil Nadu, and Andhra Pradesh, even today. These raised stones, also known as menhir, were meant to commemorate the dead. They were probably fore-runners of the elaborately carved hero-stones we find across India in medieval times, raised in honour of warriors killed while fighting raiders and thieves. It has been argued that the oldest Shiv-ling were actually polished pillars raised to mark the spot where ancient Tamil kings were killed or cremated or buried. Thus their power was anchored for the benefit of the clan and the wider community. Hence, the close association of Shiva with ghosts (bhuta-gana).

By raising the menhir, the guardian king was connected with a formless god, the mighty, Shiva, who leads the ghosts. He is liked with a fierce goddess, known as Kotravai, in Tamil Sangam poetry, who wanders in battlefields at night and feasts on the dead. Her son, the virile youth is Murugan, is the crown prince, the next king. These ideas are alluded to the oldest Tamil Sangam poetry which are about two thousand years old, a time when the South was getting exposed to Buddhist, Jain, and Hindu ideas from the North.

In Tamil Nadu, there are ‘pallipadai’ shrines built to honour kings. These can be easily mistaken for a Shiva temple, but they are in fact royal burial or cremation sites marked by a Shiv-ling. The old menhir and rocks have given way to more polished structures, perhaps under influence of new Brahmin immigrants who were enterprising and adapting old Vedic ways to local needs. A thousand years ago, as per some historians, Shiv-ling was raised at Udaiyalur village in Thanjavur, Tamil Nadu to mark the spot where Raja-Raja-chola was cremated or buried. He was a patron of Shiva. He invited Shaiva priests from the North to establish grand temples in the South, including the famous Brihadeshwara temple. In his campaigns, he brought images of Bhairava from Odisha and Bengal. But even locally, Shiva was a great deity.

Around the 8th Century, the 63 Nayanars sang praises of Shiva, and eventually overpowered the popularity of Jain monks. Like Jain teachers, Shiva was a naked ascetic. But unlike Jain teachers who advised giving up the material world, Shiva embodied restrained virile energy, a contained power that enabled worthy royal disciple to conquer the material world. This made Shiva, and his priests, very popular amongst kings of medieval India. Not just Indian kings, even kings in faraway Vietnam, Cambodia, and Indonesia, until Brahmins forbade sea-travel. Even today, most South Indians and increasingly leaders of Dravidian movement, prefer being buried, their final resting place marked by stones. They reject the Vedic ritual of cremation that encourages the spirit of the dead to go away to a faraway land of ancestors, the Pitr-loka, beyond the mythical River Vaitarni.

Shiv-ling of Royalty and Rebels

In Karnataka, the Shiv-ling took a very different form two centuries after Raja Chola. A new movement took place that rejected the casteist ways of Brahmins and spoke of Shiva as the embodiment of the soul. Shiv-ling became the form of the formless soul, to be adored and worshipped and carried around the neck in a silver amulet. This is what we see in the ViraShaiva and Lingayat community who also bury their dead. It was a movement spearheaded by Basava, whose name means bull, reminding us of Shiva’s Nandi. It competed with Jains for royal patronage and eventually became a powerful political force that shapes the fortunes of 21st Century politicians seeking power in Karantaka.

In Odisha, the temples of Shiva, dated to 7th Century, found in Bhubaneshwar, are perhaps the oldest in India. They were not built by kings, but by local communities. What is striking is that within the shrine is the aniconic linga, the form of the formless. But on the walls of the temple show images of Shiva that tell his story. Most popular image is of Shiva with his family seated on a mountain that Ravana, the rakshasa-king, is trying in vain to carry southwards to Lanka. South is the direction of Yama, god of death. The image evokes kingship, royal arrogance, and death. Is this accidental or strategic? Here we find Shiva as ithyphallic, displaying an erect phallus. He is linked to Lakulisha, a man who popularized worship of a fierce form of Shiva that was much sought by kings. Shiva is shown tamed by the Goddess who offers him food. It reminds us of Buddha meeting his wife after his enlightenment. But while Buddha is a householder who chooses to become a hermit, Shiva we are told is a hermit who becomes a householder. But even though he unites with the Goddess, he does not want to shed his semen. This retained yet aroused semen was seen as possessing magical powers in Tantrik texts.

No one talks about these various aspects of the Shiv-ling. Since 19th Century, everything is linked back to the doctrine of Vedanta, that is controlled by a monastic Hindu order. Scholars prefer to see Shiv-ling in asexual spiritual terms only, as the embodiment of the disembodied atma. No one talks of Shiv-ling as a potent symbol of restrained masculine energy and virile power, connecting the living with the dead, sought by kings to claim territory. This is the power that Hindutva seeks to harvest, as it plays its electoral magic, enchanting voters, distracting them successfully from all secular concerns like employment and economy.