Why Origins of the Caste System Polarise Both Left and Right 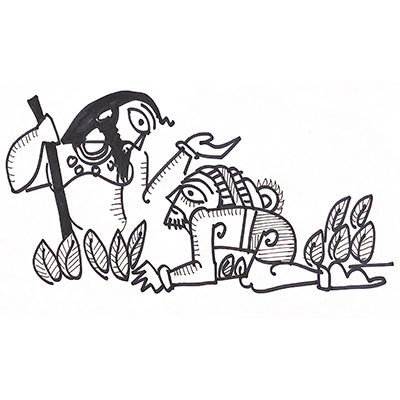 By Devdutt
12th September, 2022
The Times of India

A peculiar feature of the internet is finding a vast number of upper caste, mostly Brahmin, men who argue that there was no caste system prevalent in Vedic India. They further state that all talk of the caste system emerges after the British period, or perhaps because of Muslim rule.

In other words, before the politically popular “Islamic invasion” of India, there was equality and justice in every village of India, where everyone was treated with respect and dignity. There was no ‘untouchability’.

However, there is ample historical evidence to show that Indian society, not just Hindu, was structured around the notion of caste or jati for centuries. But this did not start with the arrival of Aryans as commonly assumed.

This fiction continues to be perpetrated by popular writers like Yuval Harari. Historians now have realised that Harappan cities were long gone by the time the Aryans arrived.

Aryans were bands of migrant men, who came to settle in a new land, and so fought local people for resources, including cows and women. But they had no notion of caste.

Most Vedic lore contains memories of both Aryan men and local women, as it was composed by their children. Today, when we speak Hindi, we use three forms of the second person (aap, tum, tu) , as against two forms found in most other societies (tu and vous, in French). But this is not traceable to Sanskrit. This means it has a local origin, probably from native mothers, not immigrant fathers. This makes the story of caste very complex.

This indicates that it is a much later interpolation, probably added by later Brahmins to give Vedic sanction to the fourfold system that privileged Brahmins over those who controlled land (kshatriyas), those who controlled markets (vaishya) and those who provided service (shudra). The question is, why would this be introduced? When did it all happen?

The last verse of the Rigveda speaks of collaboration. This means there is no concept of invader or invaded, conqueror or conquered. The picture is muddled, open to many interpretations

Vedic texts from 800 BCE describe ‘impure’ Chandalas , probably indicating an ancient origin of the practice of ‘untouchability’. But marriage prohibition was promoted only after 300 BCE, when Dharma-shastra were composed; this prohibition is missing in Mahabharata. This suggests caste, as we know it today, emerged in post-Vedic times. But when?

As per genetic evidence, we know that endogamy — which means marrying within family and community, a common tribal practice — became the norm in India only 2,000 years ago. Before that, there was little or no endogamy. It becomes the norm later. What happened 2000 years ago to bring about this shift?

It has to do with agriculture and land-owning patterns. Earlier Brahmins controlled marriage to prevent others from getting access to Vedic lore. Later, marriage ensured land remained the property of certain clans.

But things are not so simple, or homogenous, across the rest of the South. In Karnataka, agricultural activity was intensely controlled more in the South than in the North. The North was more mercantile, and this is where we find egalitarian movements rejecting caste, such as Lingayat and Veerashaiva, emerging in the 11th Century.

In the Kakatiya kingdom of Telangana, in 12th century inscriptions, we find some kings and feudal lords confidently identifying themselves as shudras, even though they hold lands and are involved in mercantile activities. No shame or impurity is attached to the word, as it is today.

In medieval times, we find the emergence of Rajput groups, who provided military services and obtained land rights in return, consolidating themselves in North India, in the early Mughal period, while Maratha groups emerging similarly in the Deccan in the later Mughal period. In Assam, the Paik system of Ahom kings created a unique social structure different from conventional Brahmanism.

Castes deemed to belong to the shudra layer were never homogenous. Not all were servile. Some were rich and powerful. Not all were deemed ‘untouchables’. Only communities involved in what was considered impure occupations were segregated as they dealt with disposal of dead bodies, took care of crematoriums, and dealt with leather and bone, garbage and sewage.

Some rationalise that when epidemics reached India, notions of hygiene gave rise to certain communities being marginalised. They were kept outside the village and not allowed to enter the village, just like wild disease producing gods and goddesses. This may have contributed to the emergence of the practice of ‘untouchability’. However, they ignore the fact that the ‘untouchables’ had no choice in the matter. There was no hope of social mobility, until mass education was introduced by the British.

That shame is attached even in modern families to toilet cleaning, despite scientific evidence, indicates the differentiation and discrimination of communities involved in sanitation work was ritual, not scientific.

Caste, as practised today, spread across India very slowly, emerging 2,000 years ago, intensifying in the last 1,000 years. It did not happen in a single thrust 3,500 years ago, as it is popularly imagined by Western scholars. It was also not the result of British colonisation and Islamic invasion, which is popularised by right-wing groups.

The truth is messy and inconvenient. Caste had many ritual, economic, political, geographical and historical factors. It was never static or homogeneous. Caste structures in Himachal, Rajasthan and Kerala are very different from caste structures in Assam, Bengal or Odisha. Such complexity does not sit well with the left or the right ideologies who prefer simplistic narratives to fuel political agendas.