Why is Wednesday called Wednesday? 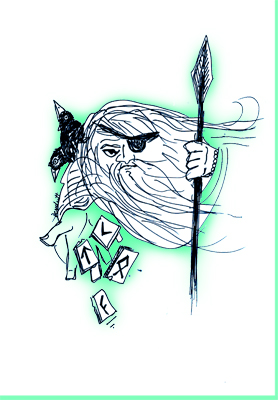 From Saturn comes Saturday. From the sun comes Sunday. From the moon comes Monday. But what is the origin of Tuesday? Wednesday? Thursday? Friday? The answer takes us to the mythology — known variously as Teutonic, Norse, Viking and Germanic — that dominated North Europe for centuries before the arrival of Christianity. The Germanic tribes who subscribed to this mythology were the barbarians who constantly threatened the northern frontiers of the Roman Empire. The Vikings of Scandinavia who also subscribed to it plundered the monasteries and settlements on the coast of England and France in the 9th and 10th centuries.

The principal god of this mythology was the one-eyed Woden, god of wisdom and divination, whose crows told him everything that happens in the world and who with his rune stones could always see the past and the future. His day, Woden’s day, is now called Wednesday. The day before Woden’s day, Tuesday, belonged to Tiw, the brave god of war, who placed his arm in the mouth of a giant wolf so that he could be chained by the dwarves and thus restrained from destroying the world. The day after Woden’s day belonged to Thor, the great hero, lord of thunder, Woden’s son by Friia, the love-goddess who gave her name to Friday. Tiw was associated with the planet Mars, Woden with Mercury, Thor with Jupiter and Friia with Venus. India had no contact with the Germanic or Viking tribes. Yet, in the Hindu calendar of India Tuesday is called Mangal-vaar or the ‘Day of Mars’, Wednesday is called Budha-vaar or the ‘Day of Mercury’, Thursday is called Brihaspati-vaar or the ‘Day of Jupiter’ and Friday is called Shukra-vaar or the ‘Day of Venus’. The practice of naming days after planets has been traced to the Ramayana, a Sanskrit epic, dated between 200 BC and 200 AD.

This leads us to the question: How is it that the planets associated with the days of the week in the European calendar are the same as the planets associated with the days of the week in the Indian calendar? The answer according to many scholars lies in Mesopotamia, the cradle of civilization, that stands between India and Europe. Babylon, the greatest of Mesopotamian cities, was the centre of many occult sciences including astrology and divination. Babylonian scholars looked at the skies and mapped the constellations. They gave great importance to seven celestial bodies in particular: the sun, the moon, and the planets Mars, Mercury, Jupiter, Venus and Saturn. The movements of these astrological bodies across the lunar and solar mansions of the sky helped Babylonian stargazers figure out the destiny of man. A day was reserved for each of these 7 astrological deities in sequence creating a ritual cycle of 7 days which became known as the week. This 7-day week based on astrological deities was adopted by India and Egypt. From Egypt it spread to Rome.

In the early 4th century, the Roman Emperor Constantine regulated the use of the week due to a problem of the myriad uses of various days for religious observance, and established Sunday as the day for religious observance and rest for all groups, not just those Christians and others who were already observing Sunday. While the Jews believed Saturday as the last day of the week and hence the day of rest, the Christians made Sunday, the first day of the week, the day of prayer. This is because in Rome, the greatest challenge to Christianity came from the solar cult of Mithra and the best way to cope with this challenge was to absorb symbols and rituals associated with sun-worship into Christianity. This included declaring 25th December the birthday of Jesus Christ, although the time of his birth was more likely to be around spring. As a result of this strategic initiative, the day of the sun, Sunday, became the day of the Lord. Muslims, to differentiate themselves from Jews and Christians, made Friday or the sixth day of the week the day of gathering.

The curious thing about the Latin/Germanic nomenclature, clearly using the planets, is that the ancient order of the planets, rising from the Earth to the Fixed Stars, can be read off by starting with Monday and jumping every other day for two weeks: Monday (Moon), Wednesday (Mercury), Friday (Venus), Sunday (Sun), Tuesday (Mars), Thursday (Jupiter), and Saturday (Saturn). One is left with the impression that the names were assigned in a kind of code, so that the Sun would come first in the week, but then the true order of the planets could be read off nevertheless. Saturn comes both at the end of the week and at the end of planets. The day that many people consider to the 1st day of the week, Monday, is the first planet and does begin the sequence of planets. We must remember that unlike the year that is a natural phenomenon (the period during which the earth goes round the sun) the week is an artificial unit of time with no corresponding natural phenomenon. In parts of Africa, a week is 3-day long and the new week is marked as market-day. The ancient Mayans had a 5-day week. The Romans had a 8-day week. Babylonian astrology and Jewish faith gave rise to the 7-day week. According to some Christian scholars, the 7-day week is not manmade. It is divinely ordained. As proof they refer to the ‘circaseptan’ biological rhythm. It is known that plants and animals go through physiological changes depending on whether it is day or night (diurinal changes) or depending on the season.

Researchers have discovered that there are changes in certain species of algae which are 7-day long suggesting that the 7-day week is based on not human intelligence but on divine intelligence. In an attempt to make the week a natural phenomenon, some people believe that a week is half a fortnight which in turn is half a lunar month. But a lunar month is over 29 days and not 28 days, hence an attempt to make a week a quarter of the lunar month seems rather contrived. Weeks can be thought of as forming an independent artificial continuous calendar running in parallel with various calendars based on natural phenomena. To break free from the religious legacy of the 7-day week, French revolutionaries tried to create the 10-day week. Their year was made of thirty-six 10-day weeks followed by a week of 5 or 6 days. The Soviets wanted to abolish religion and hence they abolished the 7 days week. Everybody worked for 5 days and rested for 2 days but the days of rest was never specified. It was not global. Thus every day 80% of the workforce was operational increasing the country’s productivity. Both exercises failed. The 7-day week typically involved 6 days of labour and one day of rest.

In traditional societies, the Sabbath was not for rest and relaxation but for prayer. A day to remember God. The 5-day weekday followed by a 2-day weekend originated following the Industrial Revolution and the passing of labour laws. The question is why was Saturday and Sunday, rather than Sunday and Monday, chosen as holidays. One theory holds that the owners of many industries were Jews while the workers were Christians. The former wanted Saturday as holiday while the latter wanted Sunday. Finally, both days became holidays and we got the 5-day working week. Following European colonization and the subsequent rise of global corporate business, the 5-day weekday with a 2-day weekend has become universal in keeping time, even in cultures that did not practice it before. Each time we use this unit of time, we must remind ourselves of the power of manmade constructs, hence myths.