Why Is There No Judgement Day in Hinduism? 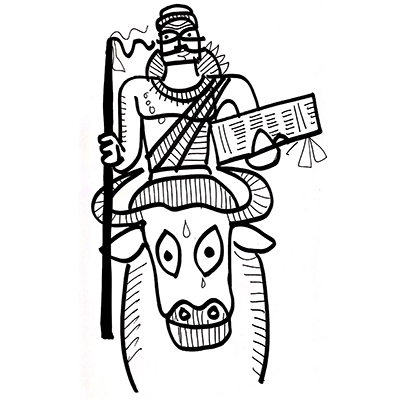 Who is a Hindu? Why is there no Judgement Day in Hinduism?

Hindus believe in rebirth and so greater value is given to debt to the world and liberation from the world, and less to what is right and wrong.

Qayamat is an important concept in Islam. On this day, after death, humans will be judged. The good who followed Allah’s laws (halal) will go to heaven (Jannat) and the rest who broke Allah’s law (haram) will go to hell (Jahannum). This idea is painted by Michelangelo on the walls of the Sistine Chapel in Rome. Jesus, as son of God, oversees the rise of the good to Heaven and the fall of the bad to Hell. Such images are not found in Hindu mythology or on Hindu temples. The celestial realms and the dark realms of hell are all seen as limbs of the Hindu deity – Vishwapurusha who embodies the whole world. The many heavens are in the upper half of his body and the many hells are in the lower half of his body. Whether in Heaven or in Hell, as per Hindu mythology or theology, we are inside the body of God. Yes, in Garuda Puran, and popular art, there are images of demon-like creatures boiling, roasting, impaling, quartering, torturing the dead in hell (Naraka) but this is Yamaloka, the realm of the god of dead, and this not equated with Judgement Day. In fact, in Hinduism, there is no Judgement Day.

In a rebirth culture, the kind of deeds we do in this life, determine our fortunes in the next life. So those who are fortunate in this life were beneficiaries of good deeds performed in their past life (punya karma). And those who do bad deeds in this life (paap karma) are said to suffer in their next life. The karma machine takes care of morality; there is no need for judges and judgement day. But Manu while writing Manusmriti realised that was no deterrent enough and so introduced the idea of many hells for crimes committed in this life, in addition to the karmic system. And so, the hells of Yama became a recurring theme in Hindu scriptures, reaching detailed form in the Garuda Purana. Yama, then becomes judge, and his scribe, Chitragupta, the accountant of paap and punya. But Yama’s judgement can be bypassed in two ways: by giving gifts to Brahmins (Manu was clearly favouring his own community) and by surrendering to the grace of Vishnu or Shiva (the writers were clearly marketing the bhakti philosophy).

The Christian/Islamic worldview holds everyone is equal before God and so everyone has to follow the same set of rules (Commandments/Gospels/Quran/Hadith/Sharia). But the Hindu world was based on karma and so diverse, and grouped into categories (varna) and so rules were different for different communities. Everyone was judged by different yardsticks: the Shudra was expected to follow Shudra code of conduct and a Kshatriya a kshatriya code of conduct. So, there was no standard or uniform rule book.

Additionally, Indian worldview did not segregate action as good/bad (halal/haram) but as debt-creating (paap) or debt-clearing (punya). Debts bind us to the wheel of rebirths. If we clear our obligations to society, to family, to nature and to culture, we are free (moksha). So, the binary is not Heaven or Hell but the Entrapment or Liberation. The Indian worldview is thus very different from the Christian/Islamic worldview.

The modern Indian nation-state with its Constitution is based on the Christina/Islamic model of one rule for all citizens enforced through judges. A traditional Hindu model would have focussed less on legal equality and more on economic diversity – how the rich and the privileged and the elite have more debts to repay society. Yama, after all, is god of accountants.