Why Is Secret Love So Important In Gita Govinda? 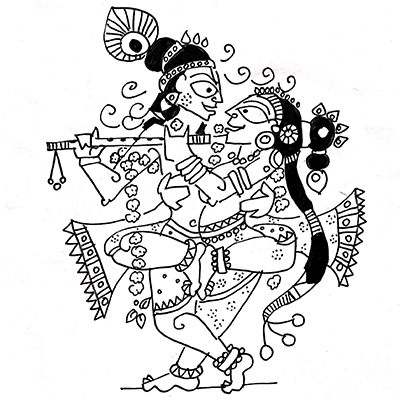 Krishna on television appears in bright light, with fair complexion and light eyes. No one is outraged or offended, even though Krishna means someone with a dark complexion, a fact reiterated by other names of Krishna such as Ghanashyam, which means one who is as dark as rain clouds. And that in Gita Govinda, Krishna meets Radha at night, never at daytime. Authentic Krishna is dark, and his nocturnal relationship with Radha has Tantrik roots. But modern Hinduism distances itself from Tantra as much as it prefers white marble Krishna statues.

The Tantric Age of India was at its peak between 700 AD and 1200 AD. Between Harshavardhan’s reign in Kannauj and the arrival of Islam in North India, we find many texts that describe philosophy using sexual terminologies. This was the age when temple building became popular. Temples celebrate the body (tanu) and all senses: the most sacred room is called garbha-griha or womb-house, making the temple structure a representation of the body of a woman. No one is clear if these are metaphors or actual practices. This is where we have to locate the story of Radha and Krishna.

Krishna is known to India from the epic Mahabharata. The Mahabharata was put in writing over 2,000 years ago. There is no Radha there. Radha appears less than 1,000 years ago, first in Tamil and Prakrit literature. She then blossoms in the Sanskrit work, Geet Govind, by Jaydev of Odisha.

Today, the relationship between Radha and Krishna is reduced to a schoolboy crush for a schoolgirl, as in a Korean soap opera. This is not the way Jaydev imagines the Radha and Krishna relationship. Poets like Vidyapati and Chandidas, who lived in the eastern part of India, and were familiar with tantric ideas have a similar stance as Jaydev.

These poets distinguished natural love and sex from marriage. Marriage is a man-made concept. The tantrics were interested in what lies beyond the rules of society or sanskriti. They were interested in nature or prakriti. How do you express pure unadulterated love and desire outside the realm of marriage and customs of society?

The story of Shiva and Shakti has marriage as the foundation. The story of Ram and Sita has marriage as its foundation. But, the story of Krishna and Radha does not have a marriage foundation. The tantric elements defy the social norms. Radha is portrayed as married to another man. She is older than Krishna and in some retellings she is related to him as his aunt. Different stories describe her as Yashoda’s sister-in-law. These stories are not very popular anymore as modern media whitewashes traditional narratives’.

Even before the Victorian era, in the Bhakti movement, tantric practices were shunned. The Bhakti movement reached its height in the Mughal era, when Krishna was viewed more from a spiritual point of view. The soul was given more importance than the body. It was the age when nirguni bhakti became widespread: the form was abandoned and God was seen in abstract as in Islamic traditions. You could sing about God, but not show him.

The temple is visual. Painting is visual. Statues are visual. Music is not visual. Music was public. Art was private. Dancers expressed the longing and loneliness of Radha inside temple walls only. Was it physical yearning or psychological yearning or spiritual yearning? The rituals valued alankara (adornment) and shringara (romance) and madhurya (delight) but shunned the overtly sexual ideas we find in Vajrayana Buddhism, for example. Bhakti focused on the spirit through sensuality rather than sexuality. It focused on the nirguni emotions and sensations, rather than the sanguni body postures and expressions. In Pahari miniature, we see trees in full bloom — the flowers calling out the bee. An old idea emerging from Sangam poetry. Using nature to explain what the body wants. But only the smart will guess the coded language.

In Krishna stories, we are discussing love and desire, without the rules of society — hence, it is in the forest outside the village at night, always, unlike TV shows where it is always daytime. And we are trying to see how that pure love and desire creates attachment? Does it make us territorial, does it make us want to dominate and control the object of desire? Or do we set it free? Krishna does not control Radha, Radha doesn’t control Krishna. Krishna walks his own path and moves towards Mathura. Radha remains in her world. Her world is in darkness, in the forest outside the village. She is an indicator of nature. Nature that will never be controlled by men or their institutions.