Why Is Being a Chandala Not Aspirational? 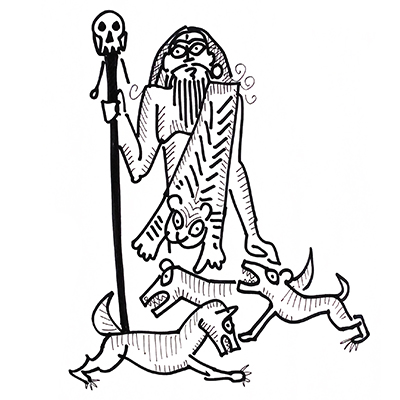 Chandala, in traditional Indian literature, refers to a person who works in the crematorium, disposing of dead bodies. He collects corpses from the village, and keeps the village clean. Despite this service, he is seen as a lowly creature in the scriptures. He is asked to stay outside the village; he is considered dirty; and everyone feels contact with him leads to pollution. He is associated with dogs and pigs, and ghosts. Even his shadow is considered impure. It is through the character known as Chandala that the idea of ‘untouchability’ enters Hindu thought. We rarely talk about him.

There is no reference to Chandala in the Rig Veda. His name appears in the later Yajurveda. He is associated with death, dirt and pollution. In the Upanishads, bad deeds result in rebirth as a dog, pig or a Chandala. In the Dharma-shastra, a Chandala is born from the union of a brahmin woman and shudra man. He is told to dress appropriately, with leather, so people know he is a Chandala and stay away from him.

Contact with a Chandala, like contact with menstruating women and corpses, demands cleansing rituals. In the Ramayana, Sita tells Ravana she is like the fire-altar who must not be touched by a Chandala like him. In the Mahabharata, the most terrible thing to happen to an honest king named Harischandra is to be bought as a slave by a Chandala. In the Jataka, there are stories of princesses turning around and cancelling excursion plans when they encounter a Chandala on the way. Thus conceptually, the idea of the Chandala, who is polluting, is nearly 3,000 years old, even though the caste system as we know it now, consolidated itself much later – from 2,000 years ago – as per genetic evidence and the writings of Chinese Buddhist monks.

In Tantra, all things considered pure in the Vedas are reversed. Wisdom exists in the crematorium. And so the Chandala is the highest of gurus. Shiva is called Bhuteshwara, lord of ghosts, and is linked with the Chandala. Buddhist Siddhas are shown in art amidst funeral pyres with ghosts and dogs, seated on corpses, holding bones and skulls in their hand, as they obtain and impart spiritual and occult knowledge. In legends of Adi Shankara, the Vedanta scholar tells a Chandala to move away from his path, and the Chandala asks him, ‘Are you asking me, or my atma?’ making Shankara realise how his notions of purity take him away from spiritual wisdom.

That does not mean the followers of Shankara do not practice untouchability. They simply equate the Chandala with Shiva, and leave the story at that. The story has no impact on social transformation. Intellectually, everyone may be equal; but in the social order, the Chandala remains the lowest in the caste hierarchy – even ordered in some places to eat leftovers, or the meat of carcasses.

In pre-Vedic times, bodies were buried under the house, in the courtyard, and a tree planted over it. This may be the origin of the tulsi plant in the courtyard of Hindu houses, marking the site where people were buried in a seated position. This link between the women’s courtyard and the burial site is pure speculation, based on current practices of gurus being buried in the courtyard under the tulsi. But these ancient practices suggest that at one time, death was not seen as inauspicious. Burial sites were used to indicate land ownership. Even today, in south India, those who own land prefer being buried in fields. But the practice changed as death was seen as inauspicious, and those who were involved in disposing of the dead, were seen as polluting.

Another function of the Chandala was that of an executioner. He was called upon to behead criminals. Although in the Vedic scriptures, the god of death, Yama, was considered the god of justice (one who does not discriminate between rich and poor), and was given dignity, in the Garuda Purana, his messengers, the Yama-dutas, are seen as frightening beings with grizzly hair, dark complexion, red eyes and fangs for teeth. One wonders if they were visualising Chandalas when describing Yama’s workers. All descriptions of crematoriums and workers of crematoriums are designed to evoke horror, and disgust. In later times, as sewage systems evolved, the one who cleaned the village of dead bodies, became the cleaner of garbage too. And he, too, was shunned as impure and polluting, forced to live on leftovers in the outskirts of the village.

This is the tragedy of Indian society. The one who cleans your house and your village is considered dirty and inferior, given low wages and even denied respect. We want our children to be doctors and engineers, even corrupt politicians and smug activists, but not cleaners. As long as we see those who clean our homes and our spaces as polluting, there is no chance of dignity of labour, or an annihilation of caste.