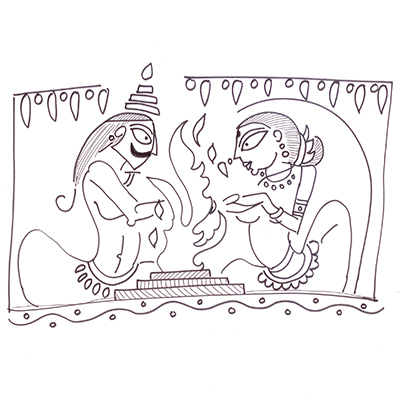 Zeus, king of the gods, in Greek mythology had children by many women, both mortal and immortal, nymphs and goddesses and titans. But he had only one wife. The Roman Empire celebrated monogamy and legitimate children, but the reason for this was not moral, it was legal. It made property transmission easier. The virginity and fidelity of the wife guaranteed the heir was one’s own. Prohibition of widow remarriage ensured property did not go to another man. Cousin marriages ensured property stayed within the family.

Such compulsions were not there in families where there was no land or title to inherit. So the pastoral patriarchs of the Bible such as Abraham and Jacob had many wives, and many children by the many wives. When the Roman Empire became Christian in 3rd Century CE, monogamy became the norm of the Catholic Church; polygamy referred to in the Old Testament was seen as barbaric, despotic, seen in the East, amongst Arabs, Chinese and Indians. European kings could have only one wife.

Polygamy (multiple legal wives) but not polygyny (multiple female sexual partners) was frowned upon in most European cultures. The kings could have mistresses, but they could not have more than one wife. This is one of the reasons that, in Europe, you find stories like that of Henry VIII of England. When the church did not permit it, he decided to move away from the church and create his own Church of England. He divorced or killed off his wives to marry again. Stories of marriage thus reveal a lot about politics. In India, we learn this from mythology.

In the Puranas, Vishnu, the preserver of the world, descends on earth, in various forms. As Parashurama, he is not associated with a wife. As Ram, he is associated with one wife. As Krishna, he is associated with many wives. Thus we see Vishnu manifested in different ways in different situations. In ancient Tamil epics, women were classified as nuns (without a man), as wives (with one husband to whom they swore fidelity) and courtesans (with many lovers). Today, globally, monogamy is seen as ‘civilised’ but it’s a global value based more on Greco-Roman ideals and notions of property transmission, which is being challenged by new ideas of singledom, polyamory, open relationships and gay marriage.

In Krishna lore, we are told he had many lovers before marriage and many wives after marriage. In contemporary literature, this aspect of Krishna lore is ignored. Spiritual teachers insist that his love is spiritual not physical. Few talk about his marriages. These marriages appear in the second half of his life, when he is not cowherd but a warrior. The background of these stories is not rural, but urban. It all starts after Krishna’s city of Mathura is burnt by Jarasandha and Krishna has to migrate westwards and take refuge in the city of Mathura. He then marries different princesses from different places including Vidarbha, Avanti, Kekeya, Madra, regions to the North and east of Gujarat, where Dwarka is located, a distance from the Gangetic regions, whose upper regions were controlled by Kurus (Haryana) and lower regions were controlled by Jarasandha (Bihar) and Banasura (Assam). Besides these Krishna has 16,100 wives. These were women who had been captured by Jarasandha, the king of Magadh. After Jarasandha is killed, these women have nowhere to go. Krishna accepts them as his junior wives.

In Mahabharata, Pandavas hide in the forest after Kauravas burn their palace. They reemerge only after their marriage to Draupadi, daughter of Drupada, and demand half of their father’s property. Thus marriage gives the Pandavas political power. By keeping a common wife, the brothers stay united. We are conditioned under colonial influence to see these relationships in moral terms (is it right/wrong?); but they need to be seen in political and economic terms, how they play a key role in shifting power between men.

In ancient Kerala’s sea-ports, a woman never left her parent’s house and she was free to have children by many men. Inheritance, especially in coastal regions, passed via nephews. Sea-traders came from foreign lands and were allowed to cohabit with the daughters temporarily, thus creating both family and commercial bonds. This is why we hear in Kerala the concept of Mappila (son-in-law). He could be Jewish (Yuda) or Christian (Nasarani) or Muslim (Yavana). But such practices were deemed barbaric once monogamy was seen as morally superior.