Why Goddess Kali Has Many Faces? 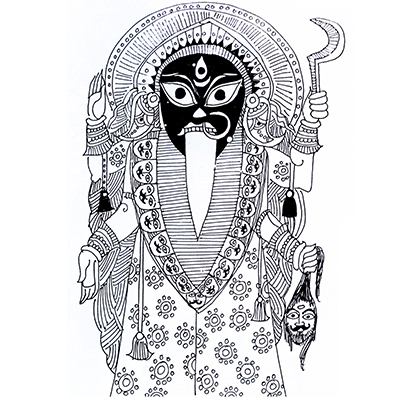 The images of Puranic gods only started appearing on cave and temple walls after the 5th Century AD. We find such images in Odisha, Karnataka, Maharashtra and Tamil Nadu, and among these are images of fierce goddesses. The most popular of these shows a goddess riding lions and battling buffaloes. We identify them today as that of Durga.

At the same time, there are images of goddesses who sit on a pile of corpses, eating flesh, their body gaunt and shrivelled, bedecked with bones and skulls and entrails, carrying weapons, and picking their teeth for bits of meat. We call these images Chamunda.

So, who are these goddesses? Sanskrit literature of this period speaks of the ‘Great Goddess’, who is awake when Vishnu is asleep, and who protects the world from harmful malevolent forces. She is called ‘Yogamaya’ in Vishnu literature. She is identified with Shakti, who is Shiva’s wife. She battles the Asura-king Mahisha, who was too proud to seek protection from women.

There is a demon called Rakta-bija or Andhaka. Every drop of his blood can create his double as soon as it touches the ground. Wild goddesses are summoned by Shakti and Shiva to drink these drops before they touch the ground. Chamunda is one of them. Kali is another.

Kali is differentiated from Chamunda and over time overshadows the latter. Unlike Chamunda, who is linked to ghosts, whose body is emaciated, and typically shown picking her fang-like teeth, Kali is shown with tongue sticking out, and her body is dark and beautiful.

Her beauty is hidden by clothes and jewellery made from the severed arms and legs and heads of those who she had killed. Kali is shown dancing on the body of her husband Shiva and linked to crematoriums.

In Tantric Buddhist literature, we find similar fierce deities — the yoginis and the dakinis. We are told how they dance around Heruka and how they are subjugated and tamed by Mahakala. These goddesses are wild, displaying uncontrollable sexuality and violence. They represent uncultivated raw potent energy. They are linked with the cremation ground, with the wild dark forests, with all things untamed and uncultivated.

While Vedic literature shuns these goddesses, links them with sorcery, Tantrik literature calls them mothers (Matrika) and knowledge carriers (Mahavidya), and pathways to true liberation. They exist individually or collectively. Some references to them are found in Vedic literature.

In the Jaimini Brahmana, we hear of a long-tongued ferocious female who licks the offerings of the gods and is caught and controlled by a handsome god who enchants and seduces her, a gender reversal of the story usually associated with apasara and tapasvi.

In the Mahabharata, we hear of seven sages who accuse their wives of infidelity. One is able to prove it. She is Arundhati. The rest are not and so driven away. They become the Pleiades constellation, the Krittika, called the wild midwives of Skanda, the god of war.

In Puranic literature, Kali is equated with Gauri. The two are the wild and domestic aspects of the same goddess who complements Shiva. When Shiva is the hermit, the goddess dances on him like the wild Kali, and is linked with death and decay. When Shiva becomes householder, the goddess sits with him as the demure Gauri, goddess of household. Kali is naked with hair unbound. Gauri is clothed and with hair tied.

Housewives celebrate the domestication of the goddess in festivals such as Teej, Gangaur and Mangala Gauri, celebrated across India. The forest becomes the field when the hermit becomes a householder. These metaphors became popular to counter the monastic traditions of Buddhism and Jainism.

In Vedantic circles, Kali’s association with blood, meat, alcohol, sex and violence places her outside the purity zone, in the periphery. She is linked to the equally wild and fierce Bhairava, who holds the severed head of Brahma in his hand.

She is also linked to Hanuman who derives his power through celibacy and control. Thus we see various forces being balanced and complemented by counter forces. The pure reject the impure, but the impure is also seen as powerful and potent. What the Vedic culture rejects, the Tantrik culture celebrates. The two are the two streams of Hinduism.

If one set of visual images is designed to make you feel safe, the other set of images is meant to make you feel unsafe. The goddess is at once endearing and offensive. Delightful and annoying. Milk-giving cow and blood-drinking tiger. Kissing you affectionately and then sticking out her tongue to mock you. Only together can you experience totality.