Why Goan Hinduism Is Unique in India? 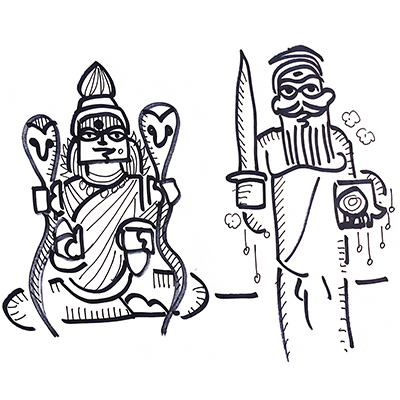 Goa is a sliver of land between the Western ghats and the sea, divided by rivers opening up to estuaries, much like Kerala, visited by sea traders for the past 4,000 years. Goan Hinduism is unique in India.

This explains why Goan villages have a unique communal structure. The harvest was shared with all — those who worked on the fields, as well as those who provided services such as potters, metal smiths, carpenters to the village, as well as to ‘servants of the village god’.

This last category included women, singers and dancers who never married, who cultivated the arts for the pleasure of the gods and passed on their wealth to their daughters. These were god’s women, unbound to any man. Many of India’s greatest musicians today are descendants of these priestesses — it is an open secret. But no one talks about them because under Christian influence, with Brahmin support, these women were stripped of their dignity, and branded as harlots.

The village gods served by temple priestesses were of two types: Grama-deva (village gods) and kula-deva (clan gods). Today the two words are used interchangeably as memories of their origin have been wiped out.

The grama-deva was bound to the land. And are often linked to the founder, the first to claim the land. This is indicated by names of deities (adipurush or first man, ekviro or the first hero) and artworks showing men on horses, men fighting tigers and women (sati) who died to protect the community. The grama-deva belonged to rooted communities of Goa, such as local tribes, fisherfolk and salt pan workers, who did subsistence farming of millets.

Many grama-deva had sacred groves that was out of bounds for villagers, and could not be used for farming or grazing. Goddesses were linked to anthills, snakes, elephants and lotus flowers, such as Sateri. Fierce gods, hypermasculine spirits of dead male ancestors, the Betal, guarded the village. These gods did not feel the need to cover their bodies in the hot humid weather. Shame was an idea introduced later.

With them came Shiva, Vishnu and Durga, and their stories. The locals spoke Konkani, a language with Sanskrit words (like Marathi) but without Dravidian grammar (as in Marathi and Kannada). This made them unique.

Brahmins began following Buddhists and Jains monks from Gangetic plains to Deccan plateau around 2,000 years ago, invited by kings, such as Kadambas of Goa, who sought their expertise in law, finance, architecture, astrology, medicine. In exchange they were given lands.

However, as per the 12th century, through the Skanda Purana’s Sahayadrikhanda, Brahmins came with Parashurama in search of new lands after he had killed all corrupt Kshatriyas of north India. Parashurama’s blood-soaked axe caused the sea to recoil and reveal the coastal lands where Brahmins could settle. In other words, as per mythology, Brahmins discovered Goa, but as per history, Brahmins migrated to Goa from other lands.

The most important Brahmin power came from the claim they knew Sanskrit, the secret language to call upon the gods. This granted them privileged position in the king’s court and access to the village deity as well as their servants. They got tax free private lands through permanent land grants carved in stone and copper plates. They introduced the concept of ‘purity’ and displaced earlier ‘servants’.

Boundaries were created: Pure spaces where the Brahmin could enter but not the singers and dancers who once entertained the gods with art. The first harvest, once given to priestesses of the gods, was now given to the Brahmin.

The old gods were gradually seen as local forms of Puranic deities. The aniconic Shiva linga was given a metal mask (mukha) and a face with a moustache. Fierce Durga became calm and gentle, Shanta-Durga. The old independent goddesses were identified as Gauri and Mahalakshmi, consorts of Shiva and Vishnu. The Betal was seen as a gana of Shiva.

Smarta Brahmins from Sringeri and Chitrapur worshipped Shiva and Gauri. Vaishnava Madhwa Brahmins from Udupi worshipped Krishna. Goa is the only place in India where effigies of Naraka are burnt during Diwali just as north India burns the images of Ravana during Dussehra. Goa also has the unique Devaki Krishna temple that seems like an image of Mother Mary holding the baby Jesus.

Arrival of the Portuguese

For the Portuguese, Goa was a land of polytheistic heathens ruled by heretic Moors. They pushed away the Moors and tried to convince the locals to convert. The first translation of the Bible in an Indian language was the one in Konkani. It was called Krista-Purana, or the chronicle of Christ, indicating the power of Konkani and Brahmins and the written word.

Catholic missionaries were shocked at the sight of independent women who danced and sang for village gods, and had many brahmin lovers. Dancing and singing for pleasure was seen as evil by the Church. The priests naturally condemned the priestesses as harlots, vile temptresses. In laws and documentation, passed by Christians, land, property rights and power was given only to men, especially men who converted to Christianity. As a result, more and more Hindu men, who never disrespected the priestesses until then, agreed with their new Catholic masters, equating the women to prostitutes.

They became ‘Bammon’, converting to Christianity but without giving up caste privilege. Social reformers saw the priestesses as oppressed women without agency; to empower them they encouraged them to marry and give all power and wealth to their legitimate husbands.

The concept of caste

Portuguese invented the word ‘caste’ to explain India’s social structure known locally as jati and kula. They saw this as a practice common among European clans, i.e. casta, to keep bloodline pure. The Europeans believed in documentation. They documented caste, which allowed many people to document themselves as Brahmins, as founders of local gods and temples, as well as original migrants from purer lands such as banks of the Saraswati. It is impossible to prove or disprove this. Documentation fixed folklore and made it ‘fact’.

Earlier Brahmins had joint families, with staff and servants, and children born within and outside marriage, and no one bothered with legitimacy matters in such detail. Temples, too, which were village property became private property thanks to Portuguese laws that demanded documentation and registration.

In the five centuries that Portuguese ruled Goa, the Inquisition rules of the Church, meant to destroy Hindu pagan practices, ironically gave rise to the concept of Brahmin Catholics who controlled farming lands and Saraswat Mahajans who controlled temples. The unlettered priestesses saw all power being taken away by men who once adored them.

Like all Hindu temples, Goan temples have their garbha griha with the porch in front. Earlier only Mahajans (dominant caste) were allowed to enter garbha griha, and the mandapa was for the other castes (Bahujan). Characteristic domes, rising above terracotta roofs, evoke a Christian feel as the architects who worked on Churches were also employed to build temples.

We see earlier Muslim influence too: The Bahamani minaret influence on the ‘lamp tower’ (dipa-sthambha) and in the nagarkhana gateways where ‘low caste’ drummers are kept hidden in the chamber above the gate, similar to ones found in Tuljapur Bhavani temple in Maharashtra.

Old pre-Portuguese Hindu temples are rare such as the Kadamba temples of Tamdi Surla. Before that were cave temples, which may have been Buddhist, now containing Shiva linga dateable to 500 AD, but identified as Pandav-leni, caves of Pandava. Even earlier there were petroglyphs, carved on the rock on the ground, facing the sky, next to rivers, and maybe 10,000 years old.

But in the countryside of Goa is where we find the oldest gods of Goa — images of grama-deva and kula-deva who existed in freedom in nature, entertained by priestesses, before they were trapped by walls, clothes, notions of caste purity, patriarchy and documentation of property rights.