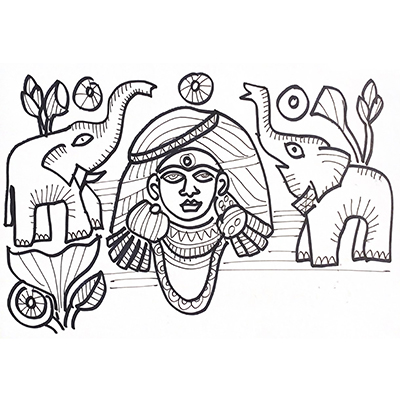 By Devdutt
25th September, 2022
The Times of India

Whenever we talk about Hinduism of India, most of the attention is taken over by talk of North India, with Rajput lands to its west and Gangetic plains to its east. Attention then shifts to South India, followed by talk of the Aryan-Dravidian divide. Hardly any attention is given to the contributions of the eastern part of India: the Gangetic delta, the Brahmaputra River valley, and the Mahanadi river basin. One wonders why.

The Aryans came to India from the Northwest, around 3,500 years ago. For them east (purva) was the sacred direction where the gods resided. So the sacred fire for gods was always placed on the East. However, during this immigration, another immigration took place on the eastern side of the subcontinent. We rarely talk about it.

This eastern migration is known as the Austro-Asiatic migration. People migrated from Southeast Asia into India via Burma and Bangladesh. They came in through Assam and Bengal towards Bihar and Odisha, near the tribal belt of Jharkhand and Chhattisgarh. It is from these migrations that the Munda language emerges.

Several Munda words have been found in the Rig Veda. For example, ‘ma’ is a Munda word, meaning ‘moon’, giving rise to words like Poorni-ma (full moon), A-ma-vaas (new moon) and masa (month). Where did this Munda language come from? Probably children of Aryan men who came from the Northwest married children of Munda men who came from the Southeast .

While rice is indigenous to India, we know that new varieties of rice and new rice cultivation techniques spread to India from Southeast Asia. Rice then became a staple diet and part of rituals. Early Vedic rituals in the Rig Veda only refer to barley. In Yajur Veda, rice is included in ceremonies.

Union of Vedic and non Vedic

Vedic culture spread eastward gradually from Yamuna to Ganga to Gomti to Gandhaki. Many Vedic kingdoms emerged: Kuru, Panchala, Kosala came into being. These valued yagna rituals as indicated by the story of Dashrath of Ayodhya performing the ritual for getting sons.

Beyond Gandaki was the region of Videha, Mithila and Magadha. This was realm of Janaka, who was linked to ploughing and Upanishads. Here thrived hermit traditions. The region we now know as Bihar was where Buddhism and Jainism first thrived. This is the place where hermits are buried and mounds raised in their honour. In the Ramayana, on the way to Mithila, Vishwamitra tells Ram about the descent of Ganga and informs him about the idea of rebirth. East, thus, contributes to a different set of religious beliefs, such as rebirth, renunciation and hermit practices.

Mahabharata speaks of a sage called Dirghtama. He is invited by a king called Bali to go to his wife Sudeshna and give her children. Thus are born the king of Anga (Bihar), Vanga (Bengal), Pundra (Bangladesh), Odra (North Odisha) and Kalinga (South Odisha).

This is a clear indicator of the union of Vedic and non-Vedic people. This indicates migration from Gangetic plains along the eastern coast led by Rishi Dirghatama and just as the western migration from Gangetic plains along Narmada river was led by Rishi Bhrigu, who established Bhrigukacha (Bharuch). These eastern lands were famous for elephants, which played a key role in establishing the Magadha empire, both historical (Mauryan) and mythological (Jarasandha, Naraka).

Bihar and Bengal were for a long time a Buddhist stronghold. The Pala kings patronised Buddhism and gave gifts to the famous Nalanda, Vikramshila and other Buddhist universities frequented by Chinese scholars. Since they established many monasteries (vihara), the area of Magadha became popular as Bihar.

Palas were replaced by Senas who were Hindus. This was the region linked to Bhadrabahu of Jain faith. This was the land of Kanha, daughter of the astrologer Varahamihira, first Bengali poet probably, whose tongue was cut by rivals, probably her father or husband or father-in-law, because she could predict the future more accurately than them.

But long before the Buddhist and Hindu influences, Bengal was home to a flourishing civilisation, traces of which are revealed by the terracotta images of Chandraketugarh dated to 2nd Century BC (Sunga period). This is what Greek writers called Gangadirai, famous for elephants. While rice is indigenous to India, we know that new varieties of rice and new rice cultivation techniques spread to India from Southeast Asia.

Further east, the region of Assam and the Brahmaputra Valley, is linked to lands controlled by Narakasura and Bana, asuras who fight Krishna. Krishna’s enemy Jarasandha is ruler of Magadha. Krishna, who hails from the Mathura region in western Gangetic plains, thus has enemies in Magadha and Kamrup which are further east.

His wife, Rukmini, in some legends, is not from Vidarbha, but from the Mishmi community of Arunachal Pradesh. All this shows the spread of Hindu ideas beyond the Brahmaputra Valley. The Lohit River is linked to Parashurama who is said to have washed his bloodsoaked axe there.

Beyond Brahmaputra are the hills full of isolated tribal communities. Until recent connections with mainland, they only spoke tonal Tibeto-Burmese languages. People assume that the word Naga of Nagaland refers to the serpent beings or Naga of Puranic lore. But this word Naga comes from Na-ka referring to the hill tribes with pierced ears, who wore earrings, in the Burmese language.

In Odisha, flows the River Vaitarni. In Purana, Vaitarni means the land separating the land of the living from the land of the dead. Why was this name given to a river in the East? A similarly named river is found in Maharashtra. Did these rivers mark the southern boundaries of Aryavarta at one time? In the Baudhyadhana Dharmashastra, people are forbidden from travelling to the eastern regions of Kalinga, except for pilgrimage. This indicates that some pilgrim sites existed. Were these Buddhist sites, or were these Hindu sites, or tribal sites? We do not know.

But clearly there is a suspicion of the eastern region of Kalinga. We have all heard of Ashoka’s famous invasion of Kalinga, but we know very little about the people he invaded. What religion did they practise? Were they traders or farmers? Did Ashoka seek access to the lucrative sea-trade to Southeast Asia?

Shortly thereafter, a king called Kharavela ruled Kalinga. He seems to have been an admirer of Jain monks. In his inscriptions in the Udayagiri caves, he uses the word “Bharatvarsha” for the first time. But this region is restricted to Gangetic areas. He also refers to the confederacy of Dramira (Tamil?) kings for the first time.

It is in Odisha that we find some of the vast Buddhist monuments like Ratnagiri, which are now being forgotten, overshadowed by Hindu temples of the coast. Some scholars say that in the 10th century Padmavsambhava took Tantrik Buddhism to Tibet was from Odisha, and not from Gandhara (Northwest) as is commonly assumed. With that Buddhist influence in Odisha waned and Hindu influence rose.

In the eastern side of India, we also find peculiar Magadhan language patterns that are not found in the rest of the country. For example, in the grammar of the language, the masculine and feminine are not gendered. This is why we find Odia and Bengali people referring to themselves in gender neutral terms. This is unlike Hindi where language is highly gendered. These differences do not happen accidentally or randomly. In fact, they state a difference in culture, another Indian tributary, beyond the Aryan and Dravdian ones. The eastern side of India thus, needs at least as much attention as the north and south of India