Why Does Shiva Behead Brahma? 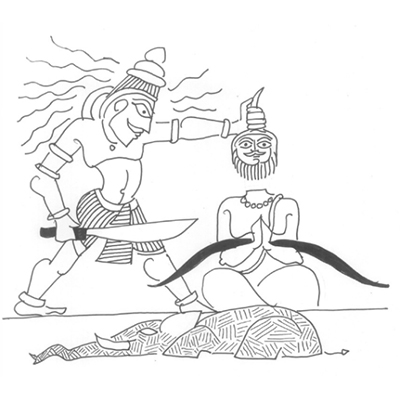 Social Justice warriors will often tell the story from the Uttara Ramayana of how Ram beheaded the ‘low’ caste Shambuka for breaking caste rules and performing austerities like a dvija or a twice-born, ‘upper’ caste Savarna. But they will not tell you that the same Uttara Ramayana reminds us that Ravana, killed by Ram, was also a Brahmin, a Vedic scholar, son of Rishi Vishrava, grandson of Rishi Pulatsya, great grandson of Brahma.

So why does Ram – the alleged patron of Hindutva politics – behead a Brahmin? And why does Krishna encourage the killing of the Brahmin tutor, Drona? And why does Shiva behead Brahma, the creator, as well as Brahma’s son, the Prajapati Daksha, Brahmin patron of yagna? What is going on? Why are the Puranas, composed by Brahmins, spreading Brahmanical ideology, telling stories of gods like Shiva and Vishnu beheading Brahmins? Is the academic and activist quest to view Puranas as promoting Brahminical hegemony distorting our view of Hindu scriptures?

First some vocabulary: Brahman; Brahmana; Brahmin; Brahma. Four rather confusing Vedic words. What do they mean? Let us clarify that first.

Brahman is an abstract concept referring to the “power of language” which is central to Vedic chanting (patha). Vedanta equates it with the cosmic-soul, param-atma. It is both formless (nirguna) but can take the form (saguna) of Shiva and Vishnu, even Devi, as per Tantrikas. Brahmana is a set of ritual manuals, explaining and contextualising the performance of yagna. Brahmin is the man who remembers the Vedas and the Brahmanas and transmits it orally, a walking library, patronised by kings, whose killing was the worst crime as it amounted to loss of Vedic knowledge in a pre-literate society. Later, these Brahmins became temple priests (Pujari), astrologers, scribes (Pandit), as well as bureaucrats of kings, experts in various subjects (Shastri) as well as teachers (Upadhyay). Brahma is a four-headed Puranic deity, part of the Hindu trinity, the creator of all living creatures, who is not worshipped, and is constantly beheaded by Shiva for his excessive uncontrollable passion.

Nowadays Brahma is called the creator of the world, a 2000-year-old Puranic view not found in the 3000-year-old Vedas. Rig Veda does have many creation hymns. One says no one really knows how creation happens. Another refers to ‘Hiranyagarbha’ or the golden womb from where all things emerged. Still another speaks of Purusha of thousand heads, eyes and feet, whose eyes are the sun and moon, his body gives rise to different kinds of humans. These ideas were elaborated in Brahmana literature, transmitted by Brahmins, who eventually spoke of a father-god Prajapati, embodiment of the sacrificial ritual itself, whose children devas and asuras keep fighting each other.

But the Vedic world changed, 2500 years ago. Buddhism and Jainism arose and offered an alternate view of the world. Vedic rituals and material desires entrapped humans in the world of death, rebirth and suffering. Monasticism offered liberation. Edicts of the Emperor Ashoka’s edicts, 2300 years ago, and the writings of Patanjali described the tension between Brahmin and Shraman (hermits, monks), as the fight between snake and mongoose, owing to opposing ideologies! The only way for Vedism to survive was to transform – and in this transformation, Brahma had to be beheaded.

In Buddhist and Jain art, Brahma and Indra were shown bowing to the Buddha and the Tirthankaras. Naturally, the Brahmins distanced themselves from these two gods and went on the lookout for new gods, and new ideas.

First the new idea. You did not have to renounce society to break free from the cycle of rebirths. You just had to renounce desire. You could be a hermit-householder, a Hegelian synthesis of the thesis (materialism of the Brahmin householder) and the anti-thesis (spirituality of the Shramana hermit). So Shiva, the hermit of Kailasa who destroys Kama, god of desire, agrees to marry Shakti and become Shankara, the householder of Kashi. And Vishnu, from whose navel Brahma is born, descends on earth as Ram and Krishna, serving as ideal householders, engaged in action, but detached from the fruits of labour.

Shiva, Ram and Krishna have Brahmins as enemies – Brahma, Daksha, Ravana and Drona, who do not understand the meaning of yagna, who are orthodox and materialistic and who do not let go of desires, despite knowledge of Vedas. They are householders, not hermit-householders, they are selfindulgent and do not care for others. Is there a message here for Hindus of the 21st century smitten by Hindutva rage?